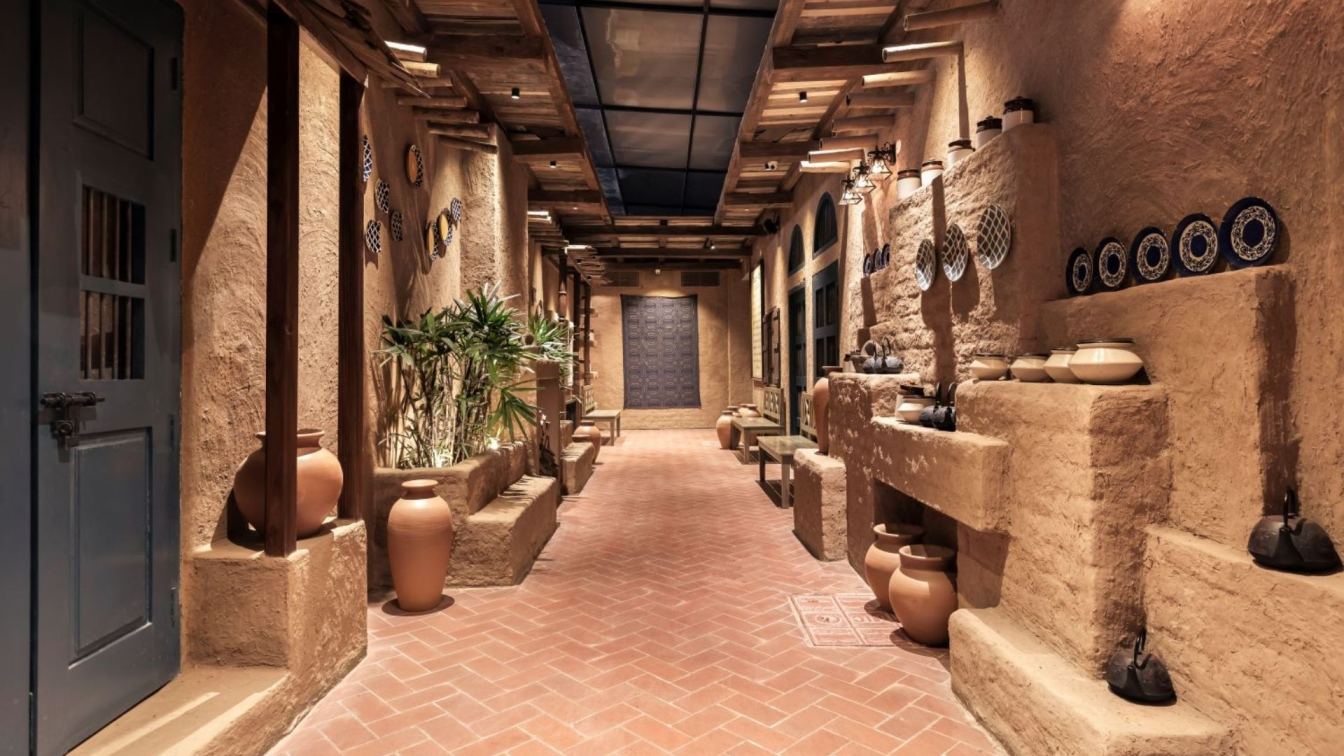 Designed by Indian architecture and interior design firm Loop Design Studio, Baba's restaurant draws its inspiration from the architecture styles of rural havelis and houses of Punjab. The idea is to create an upcycled space with a traditional material pallette from around the context. The entrance alley is a longitudinal monolithic axis created using mud plaster/phuska and depicts the bazaar streetscape using different volumes, elements and layers. Masons and artisans were brought in from the neighbouring villages to create the phuska mixture and apply it on the walls/surfaces.

The brick flooring of the alley in a herringbone pattern enhances the old-world charm of the space. The alley flows into the indoor seating area which follows a similar spatial language. The existing yellow kota flooring was retained in most areas and patchwork of terrazzo were added organically where kota was damaged. The addition of terrazzo to kota flooring was reminiscent of the incremental architecture style of India where one can see the different layers that get added by different patrons throughout time. 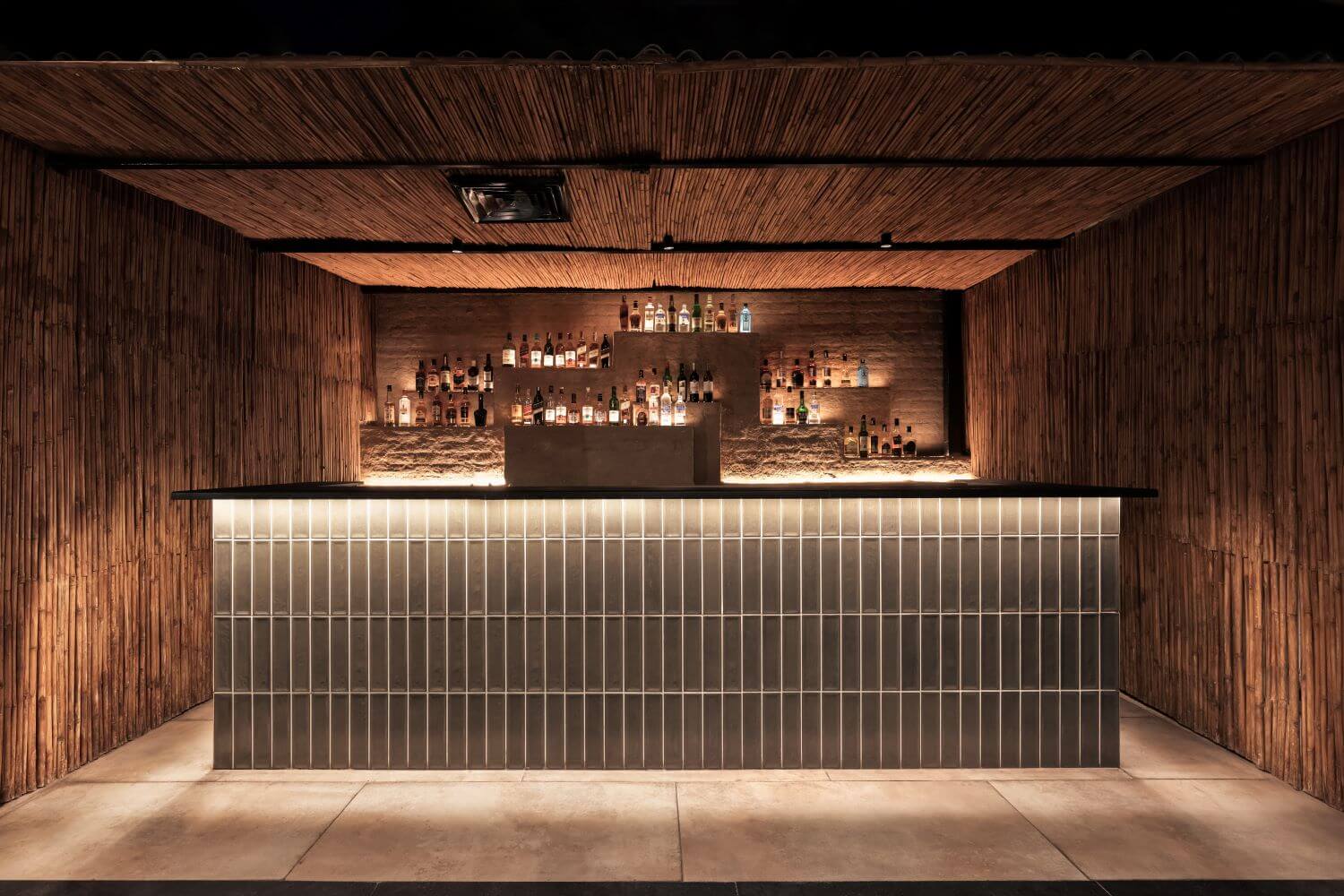 A textured ceiling of bamboo and wooden beams add weight to the softness of the indoor area. The indoor space is segregated from the court and the staircase through semicircular arches that frame both the spaces in a beautiful manner. The courtyard walls are rendered in Nanakshahi bricks that used to be the main cladding material for rural architecture. Terracotta pots in different sizes that were created by local potters are layered against the brick and they double up as wall washing light fixtures. The bar is another monolithic injection in one corner of the court.

The bar surfaces (sides, roof and the back) are cladded in bamboo and plaster that blend in to create a uniform beige layer. The bar front is done in olive hadmade glazed tiles that is juxtaposed against a subdued backdrop. The freestanding barfront creates an ethereal aura and dissipates energy into the somber space. Baba's is a contemporary vernacular take on Indian Dhabas whose vivid informal vibe is tweaked to create a purist semi formal space but which is true to its culture and context. 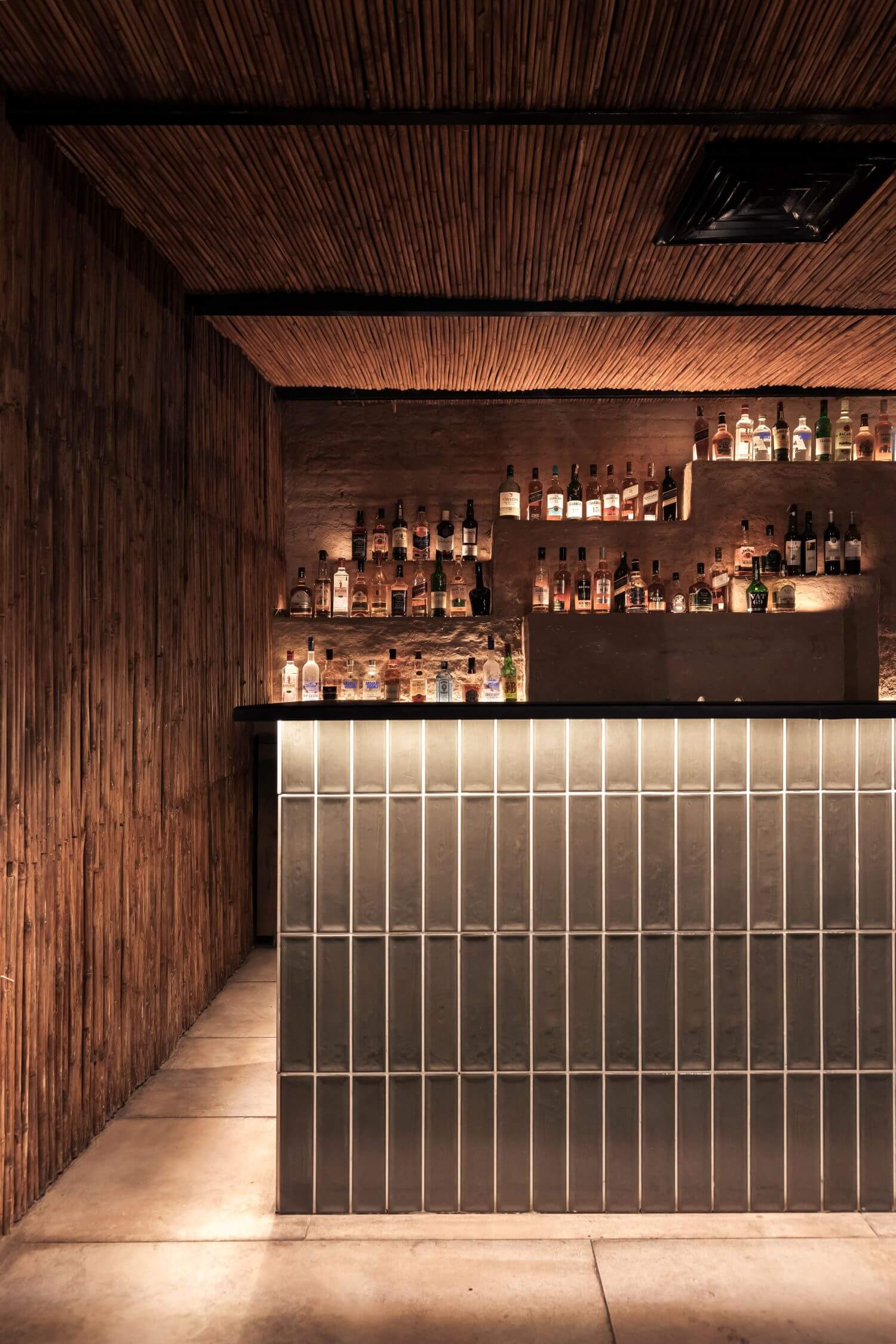 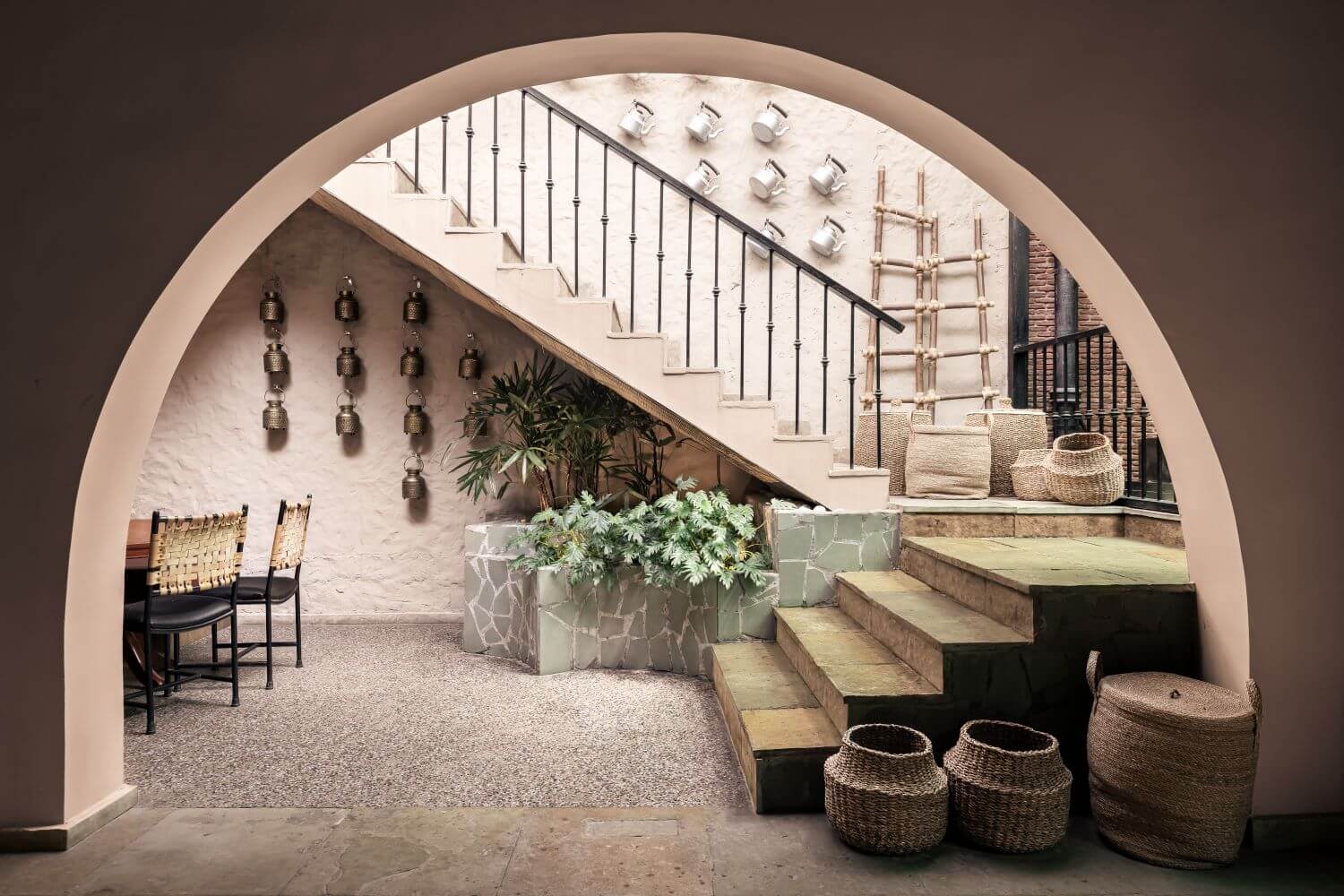 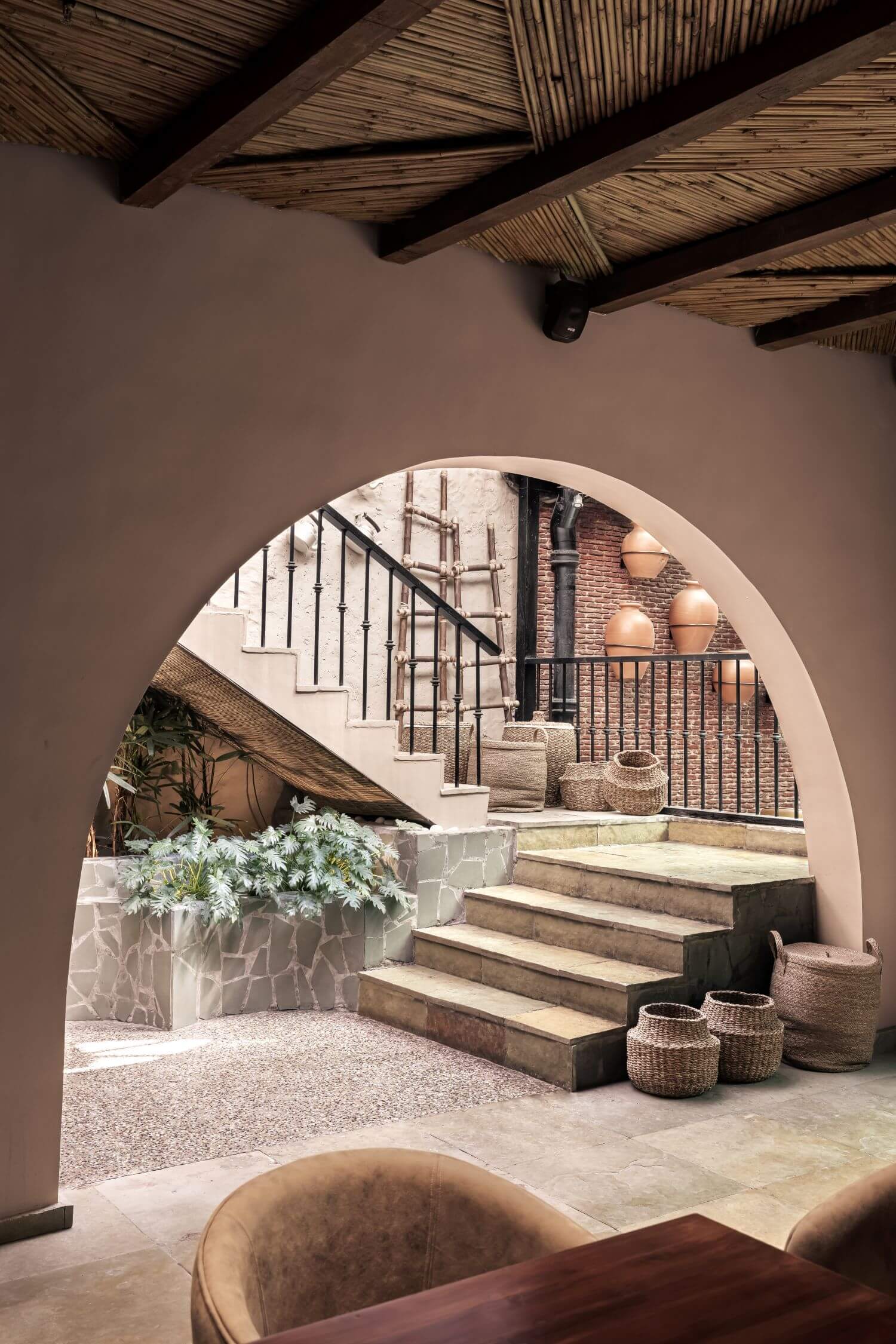 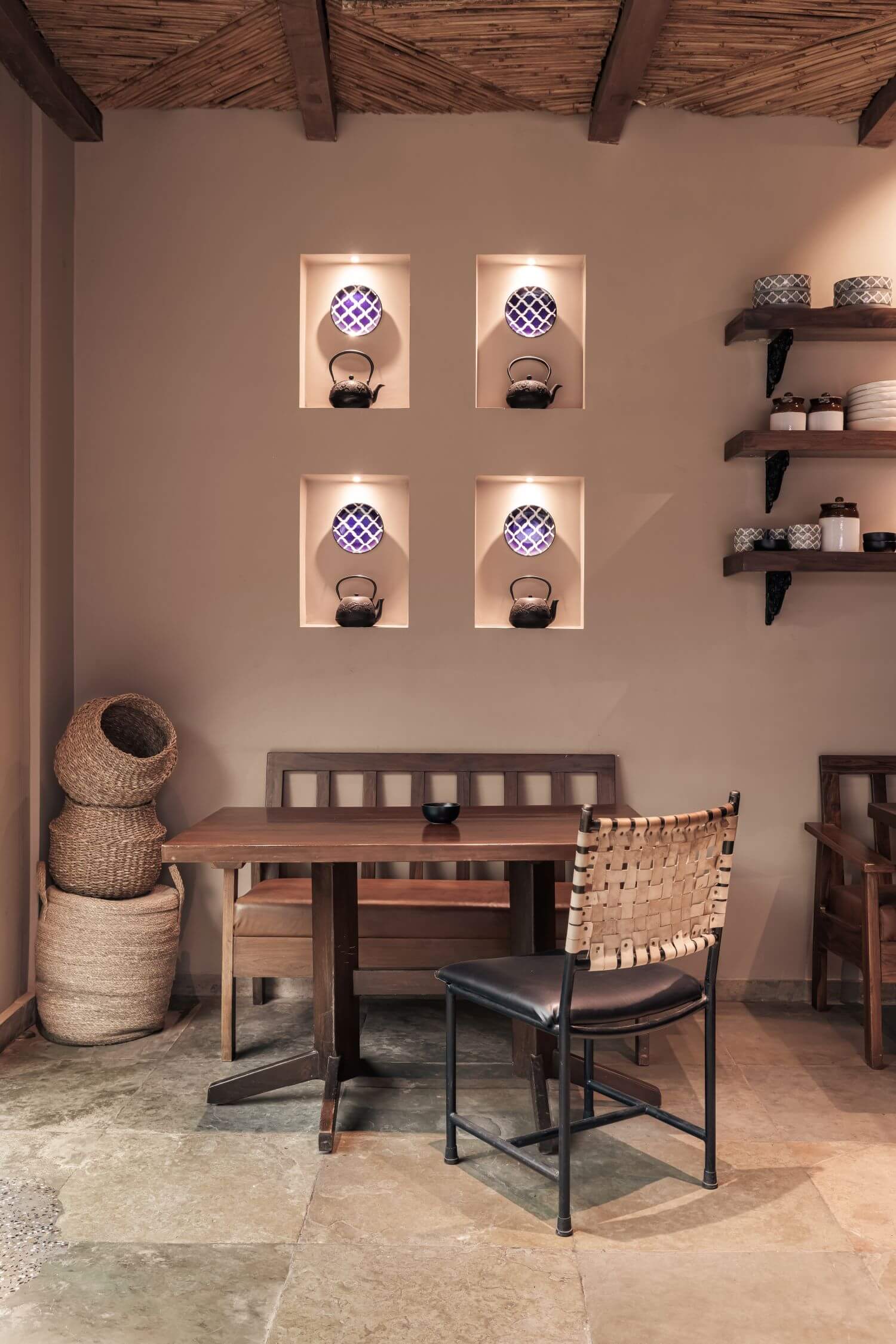 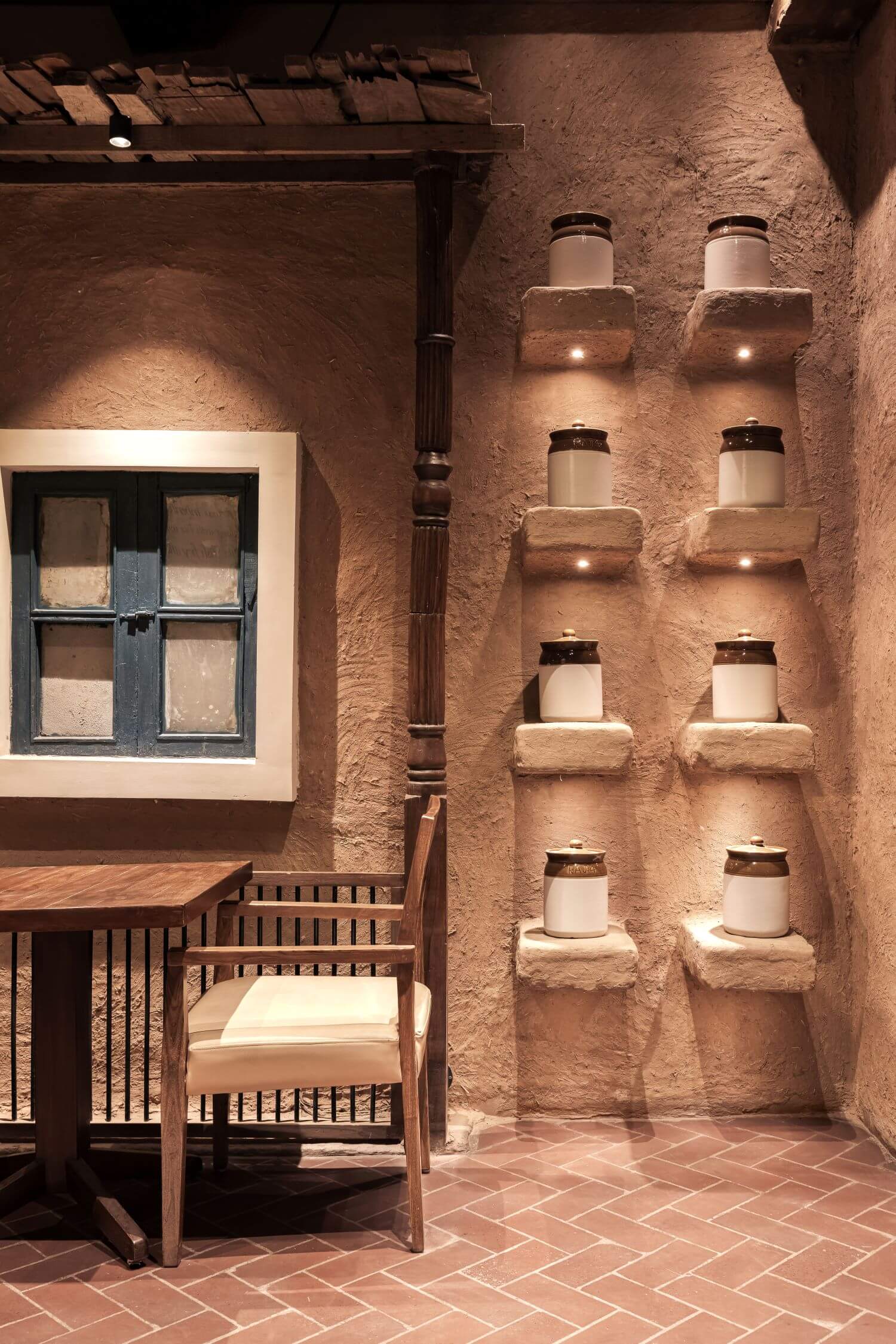 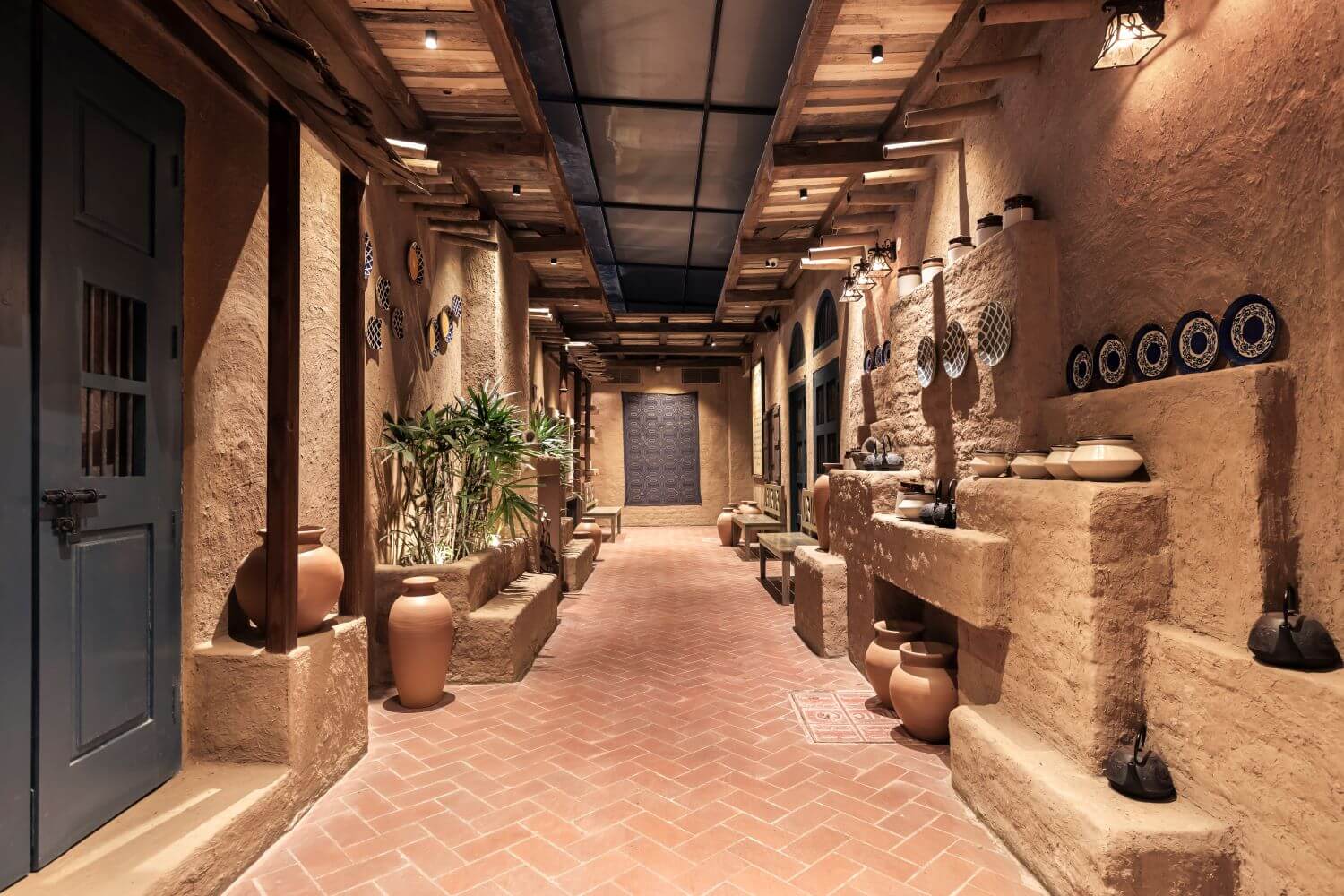 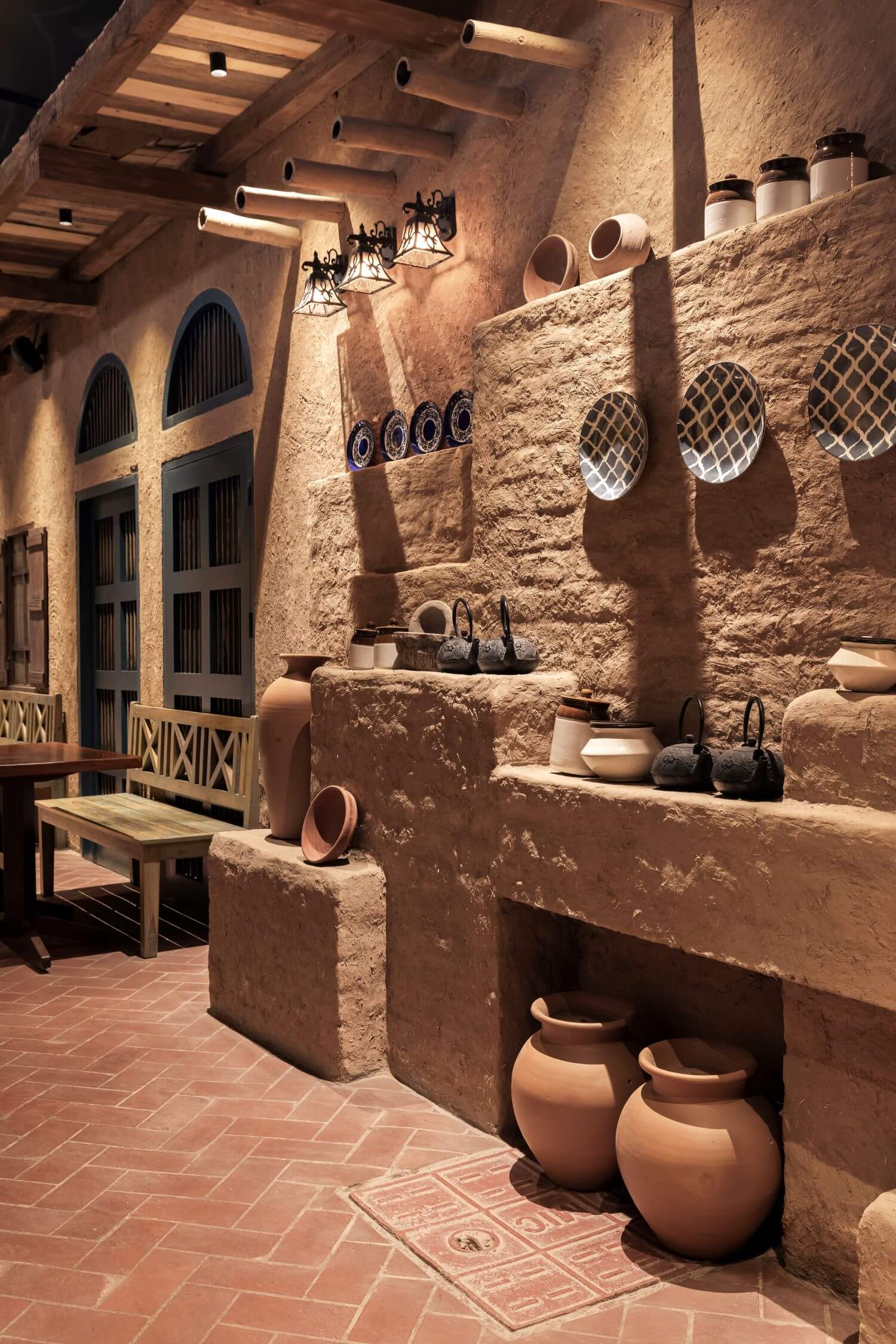 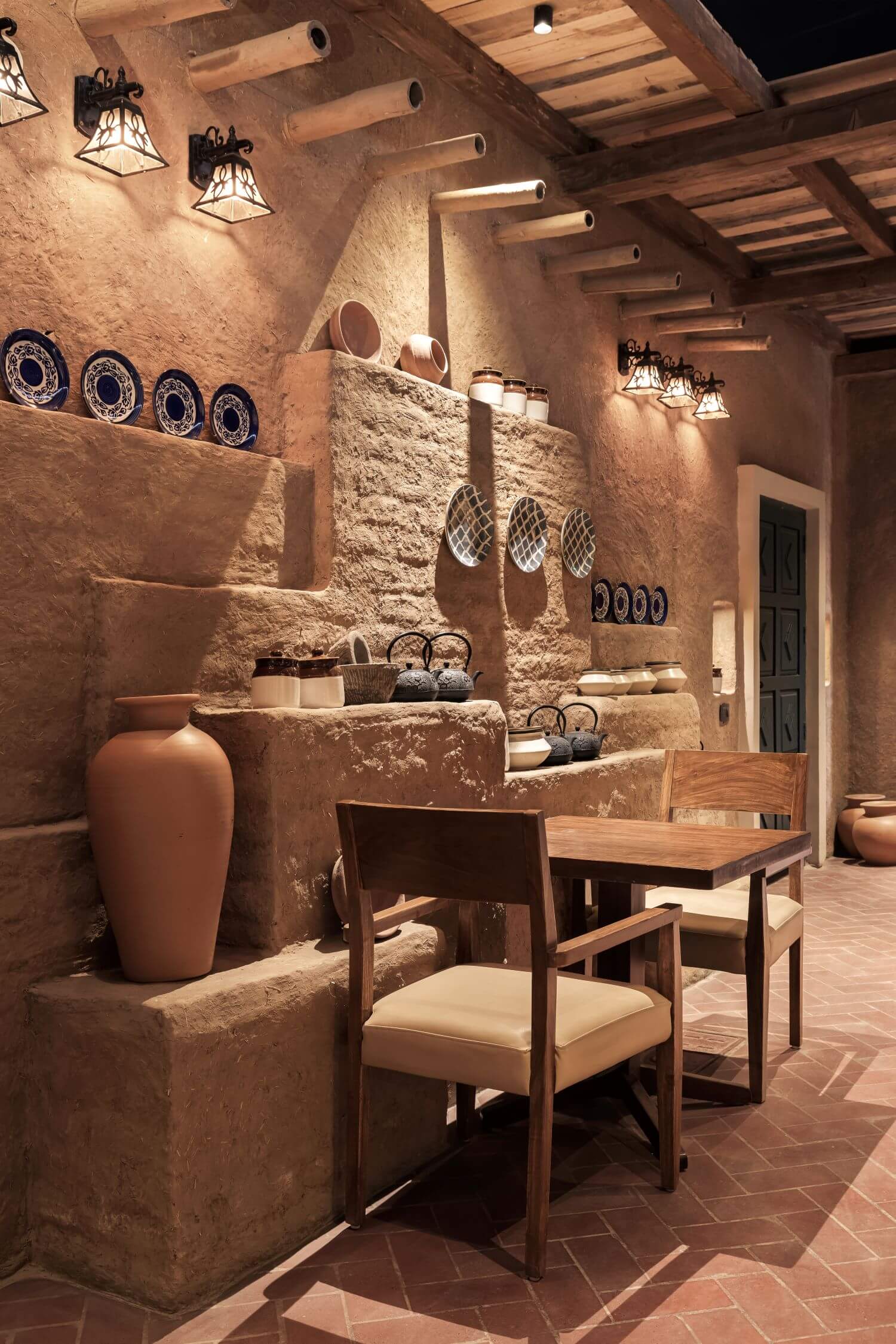 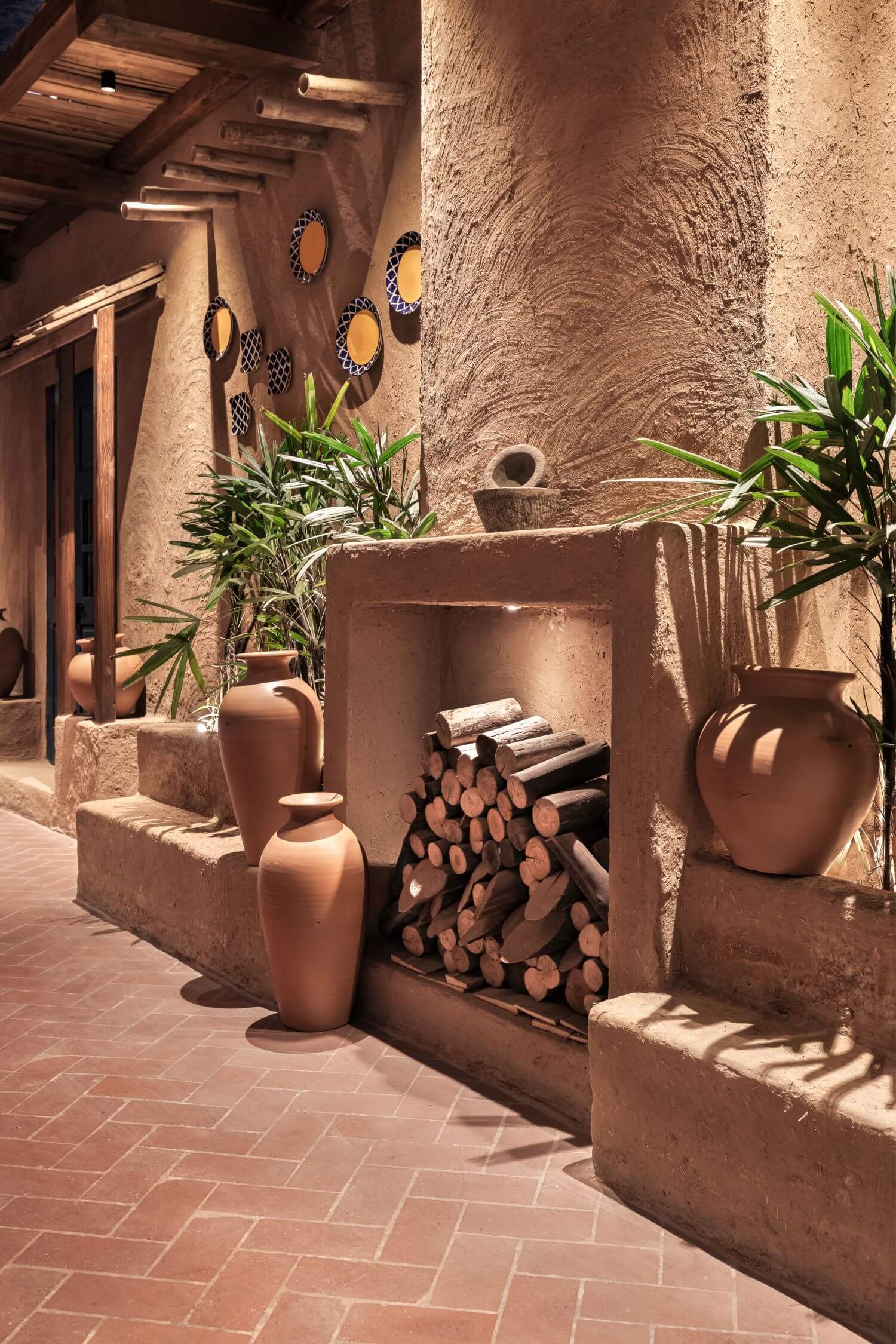 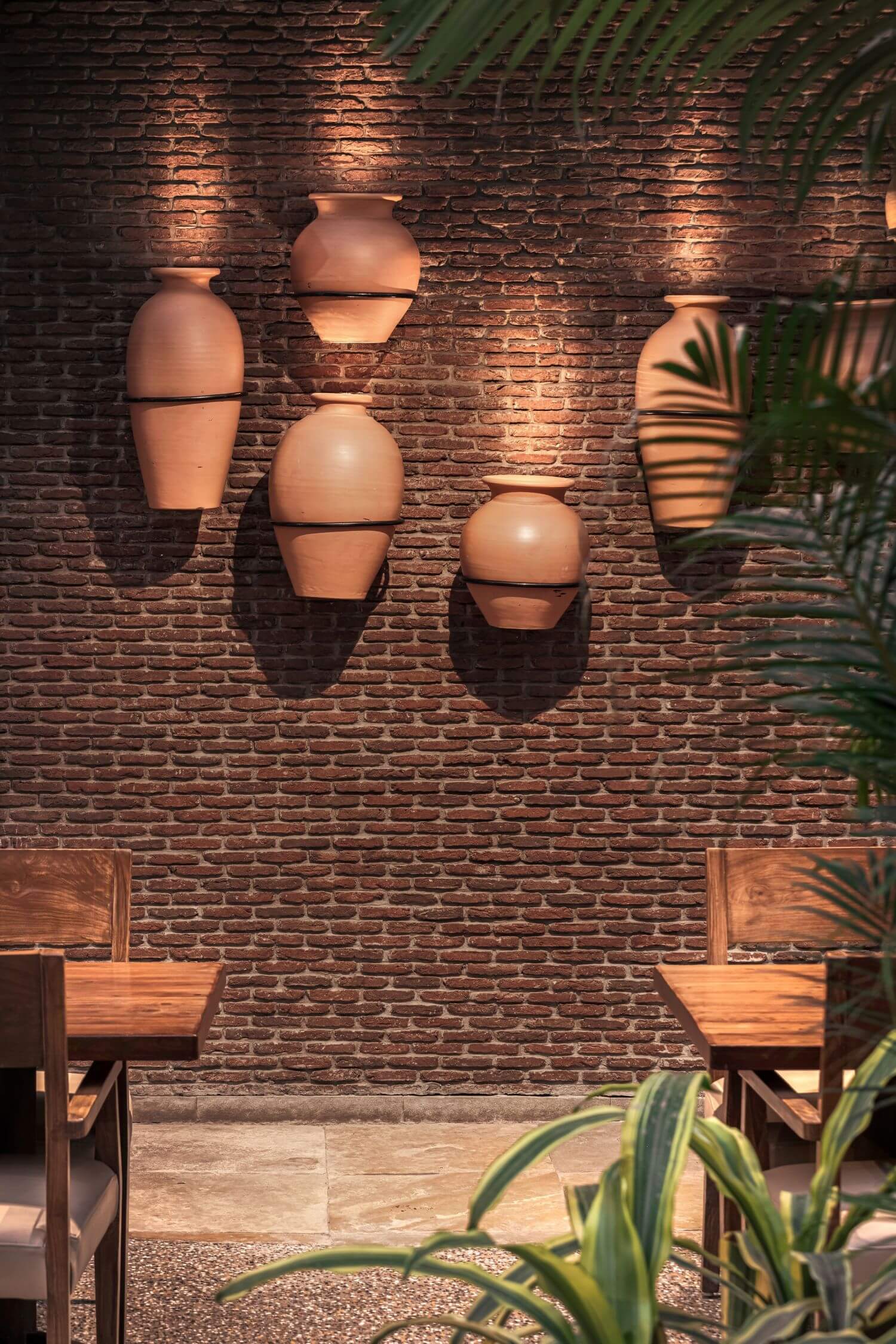 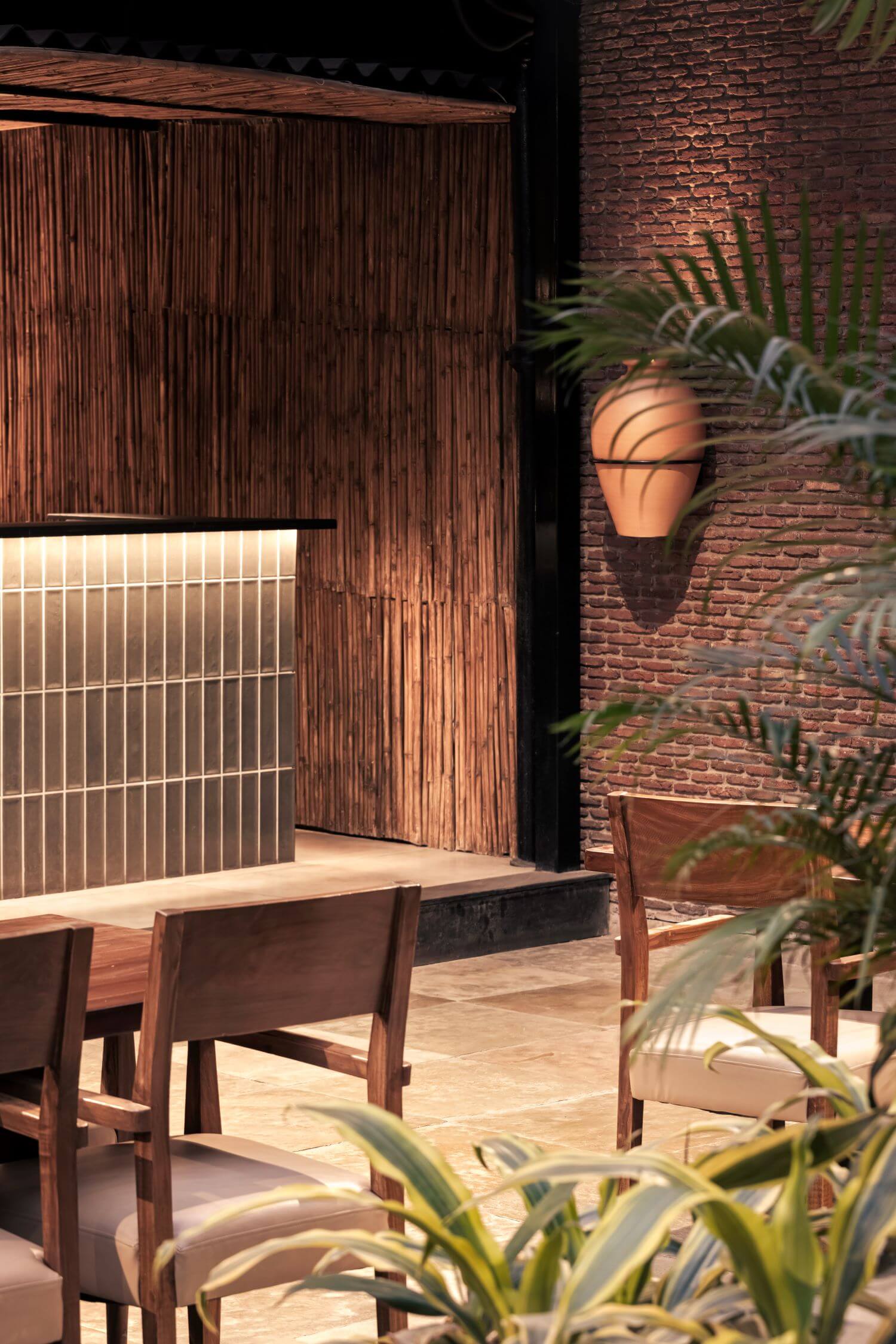 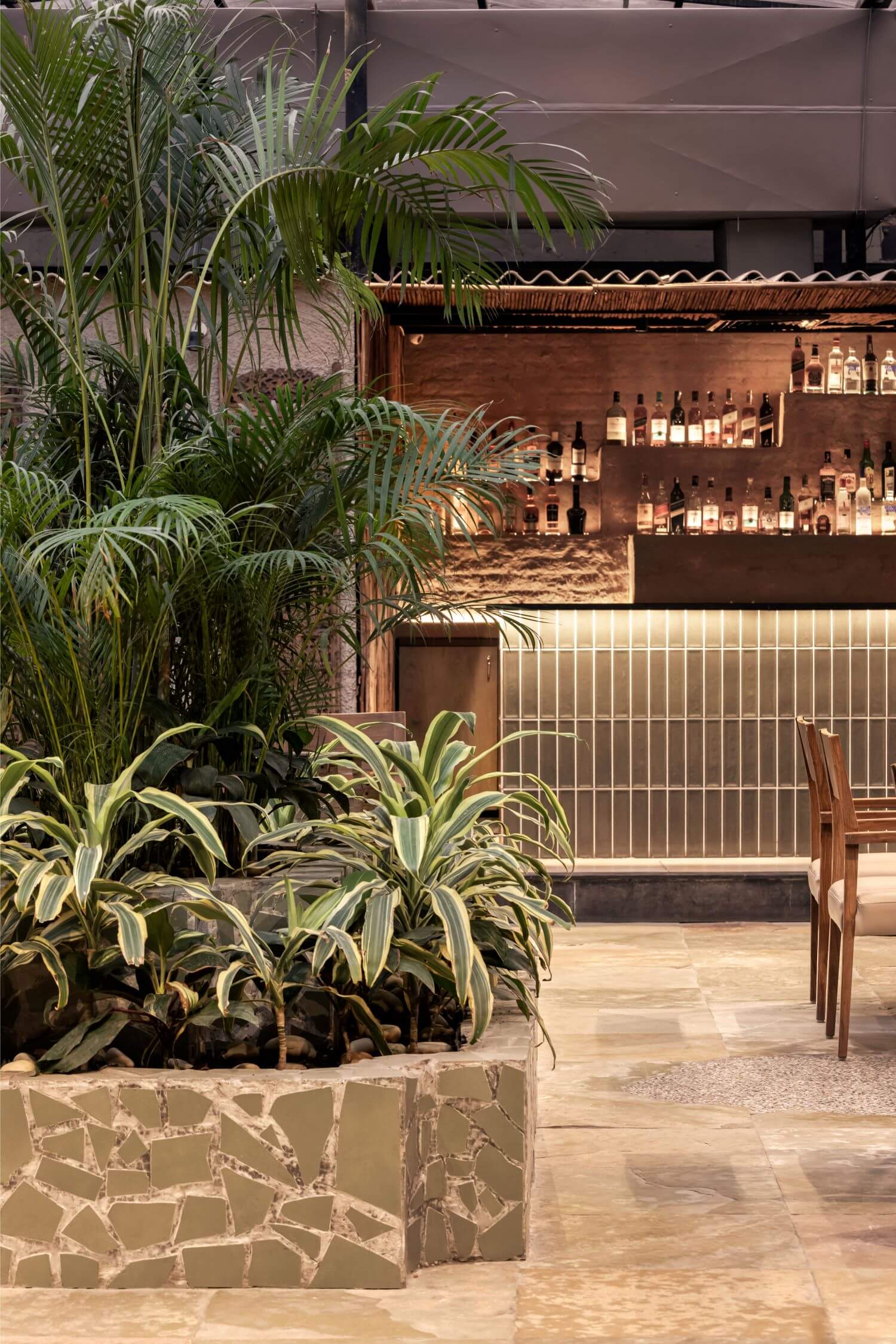 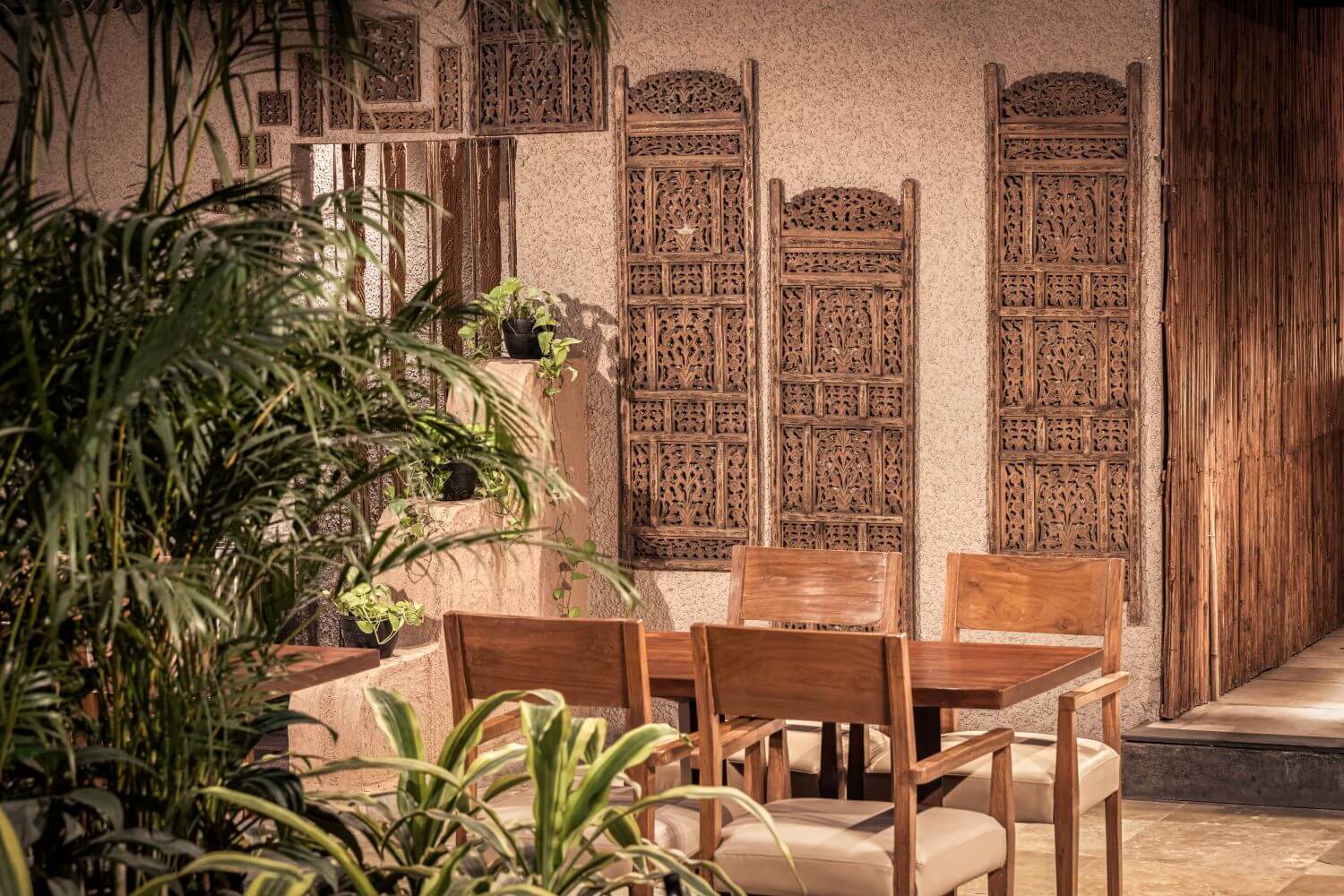 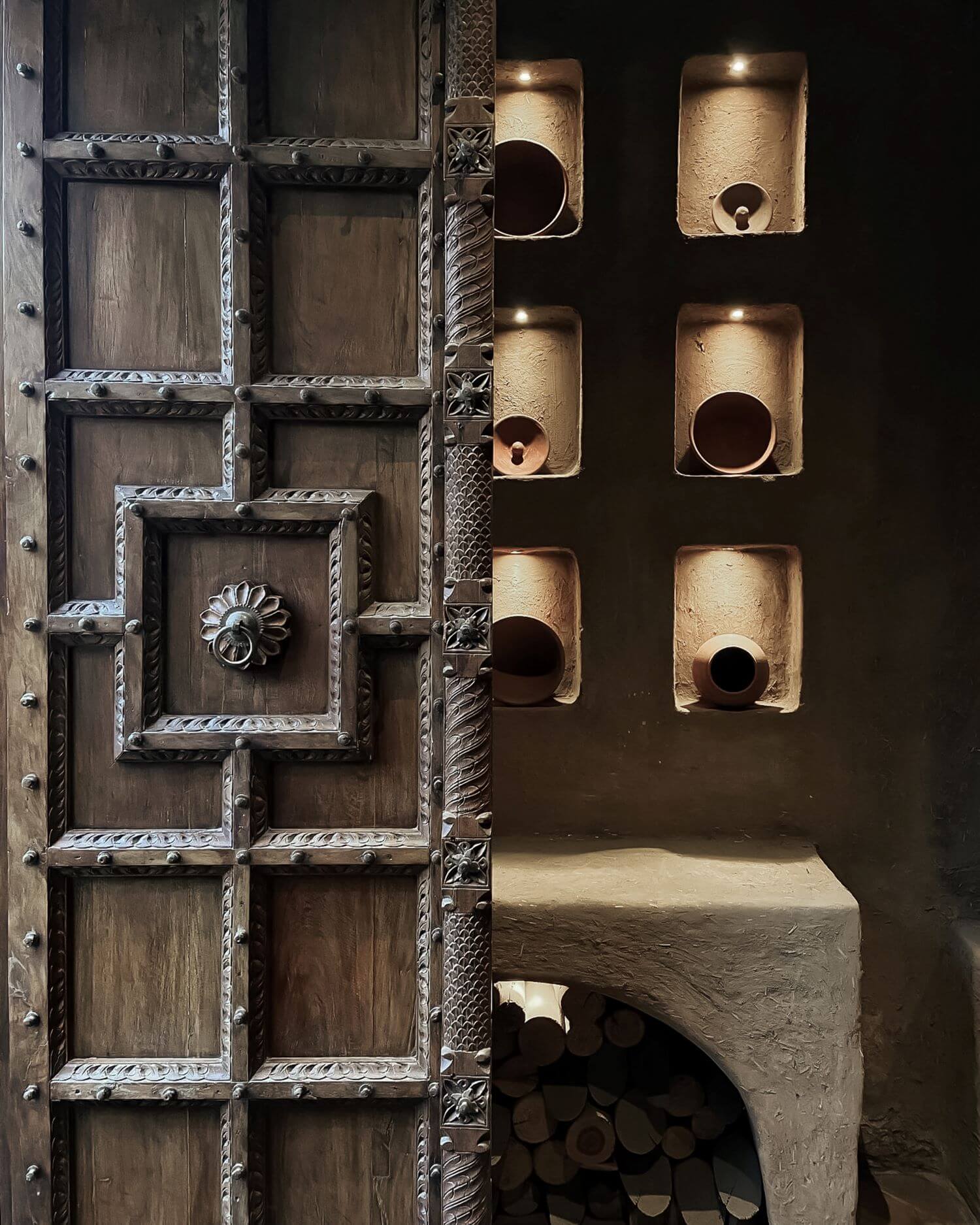 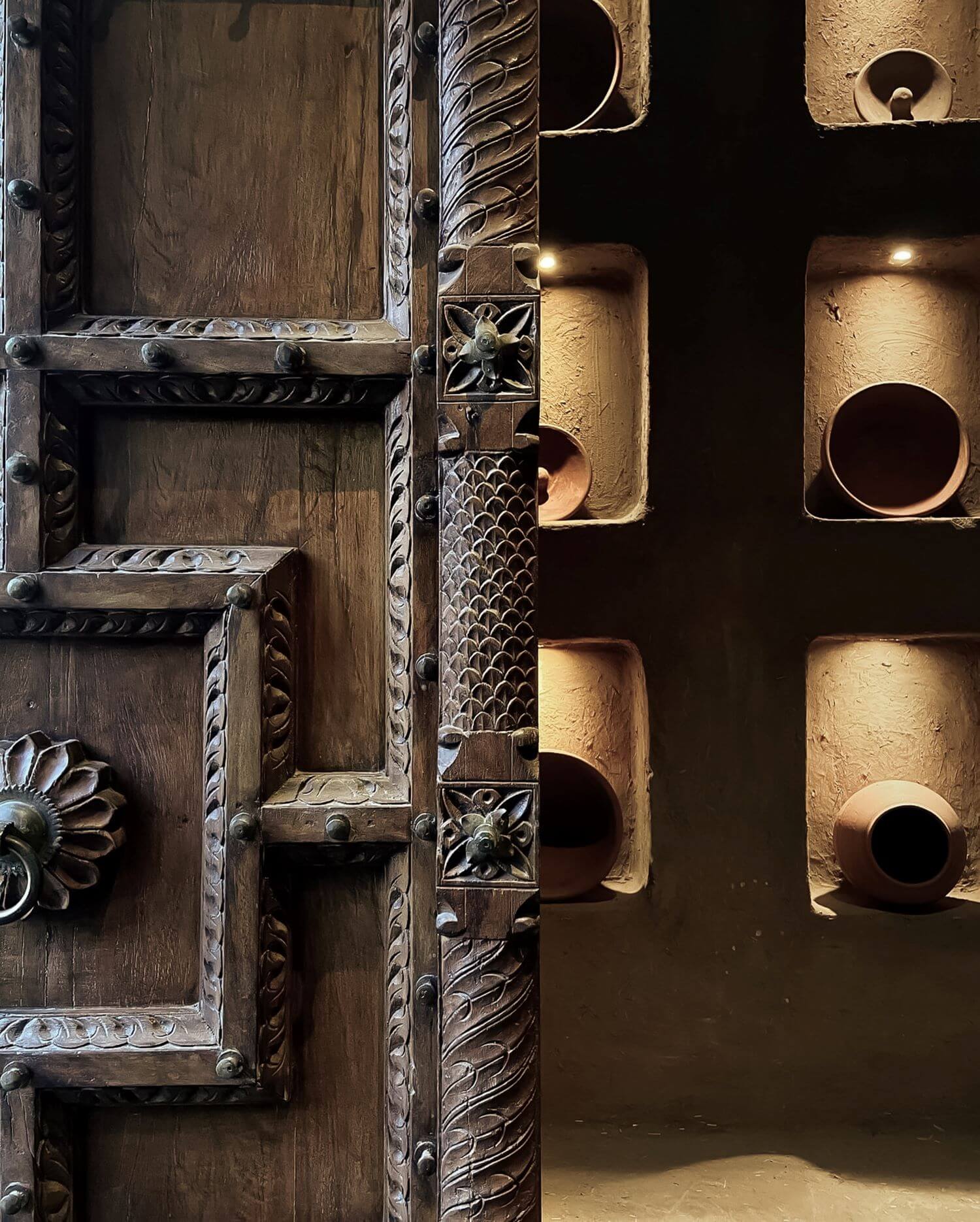 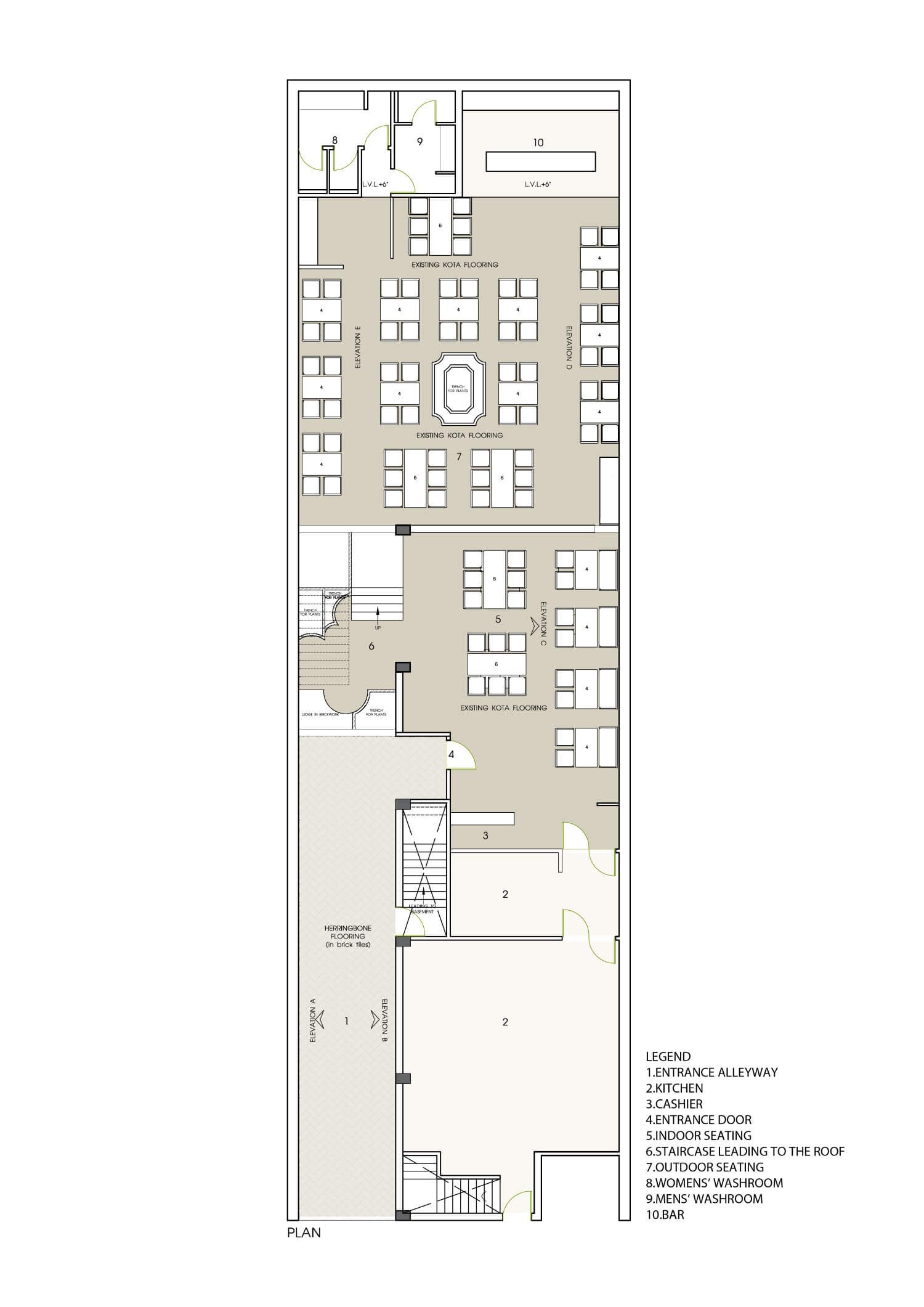 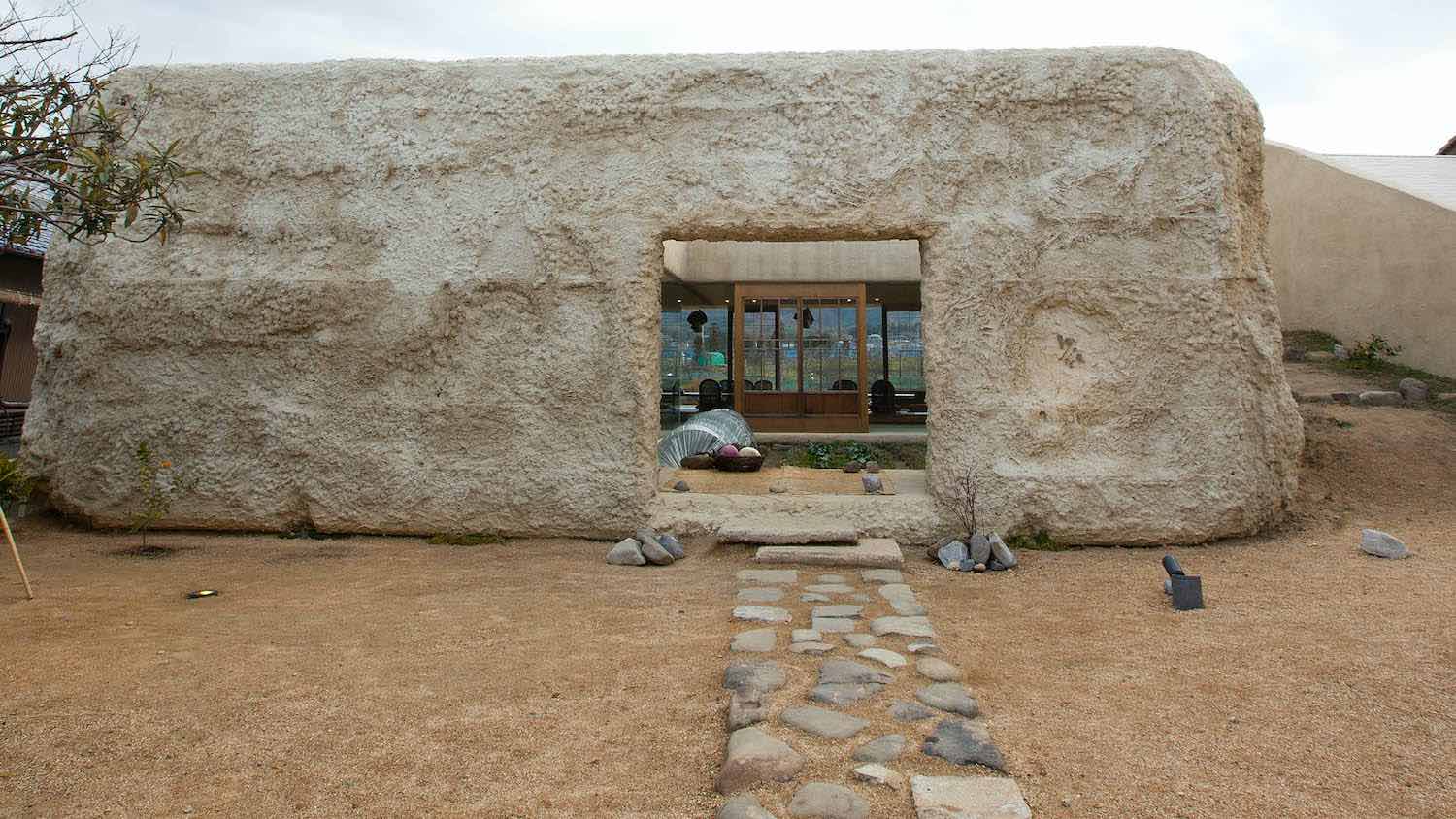 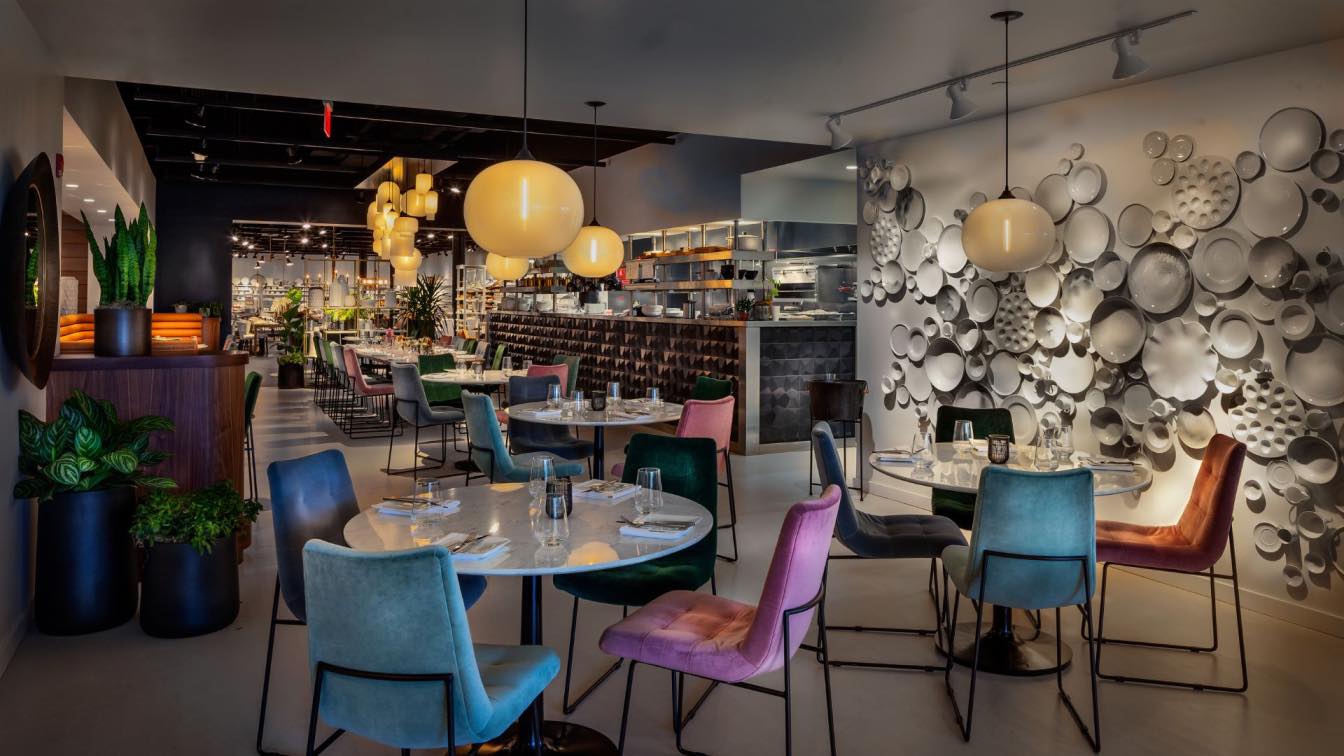 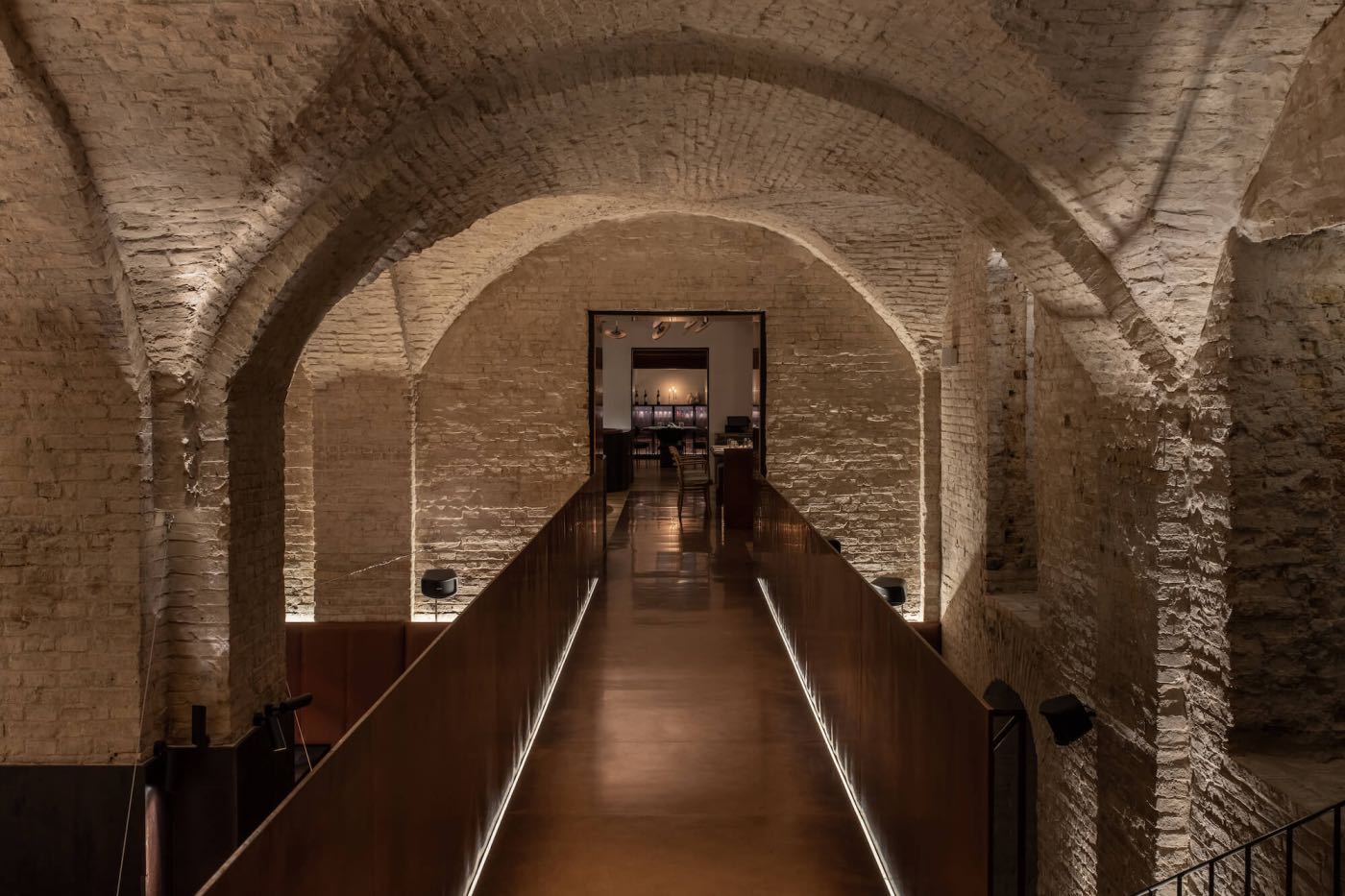 Samna: A restaurant with the copper bridge in Kyiv, Ukraine by YOD Design Lab 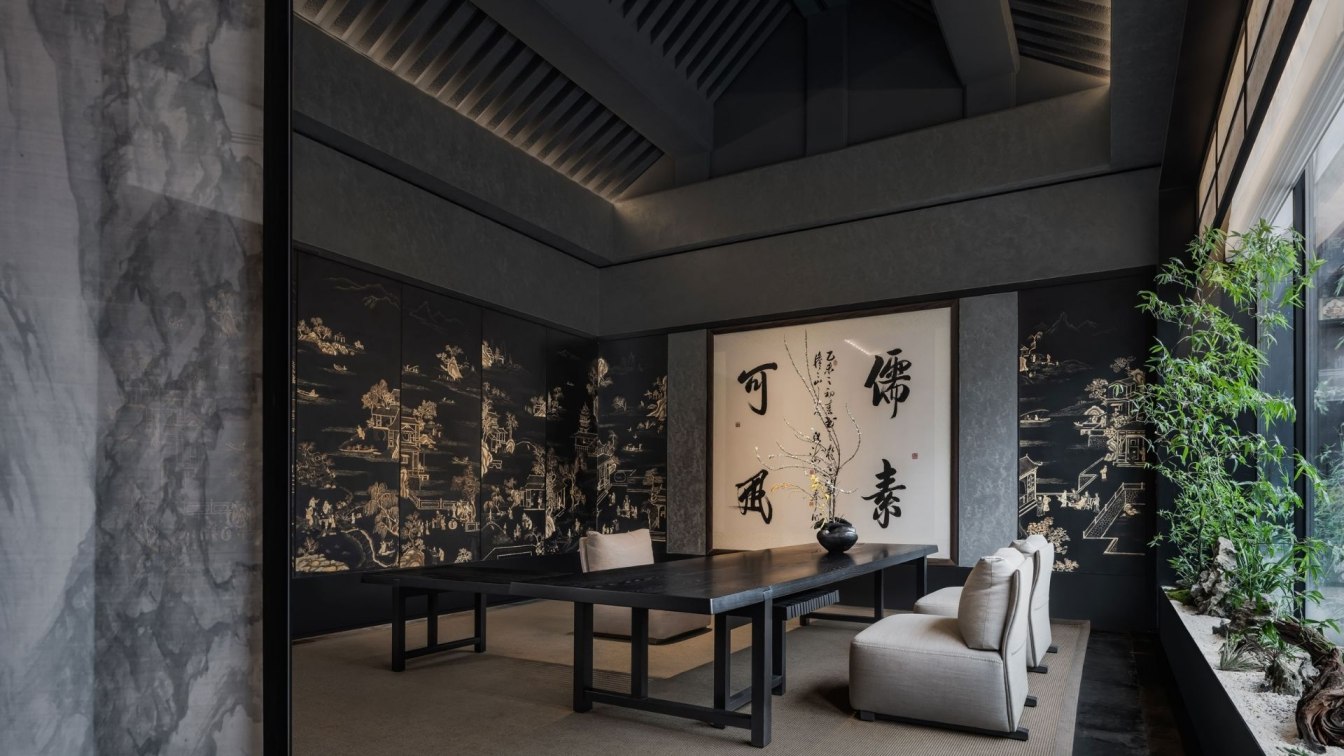