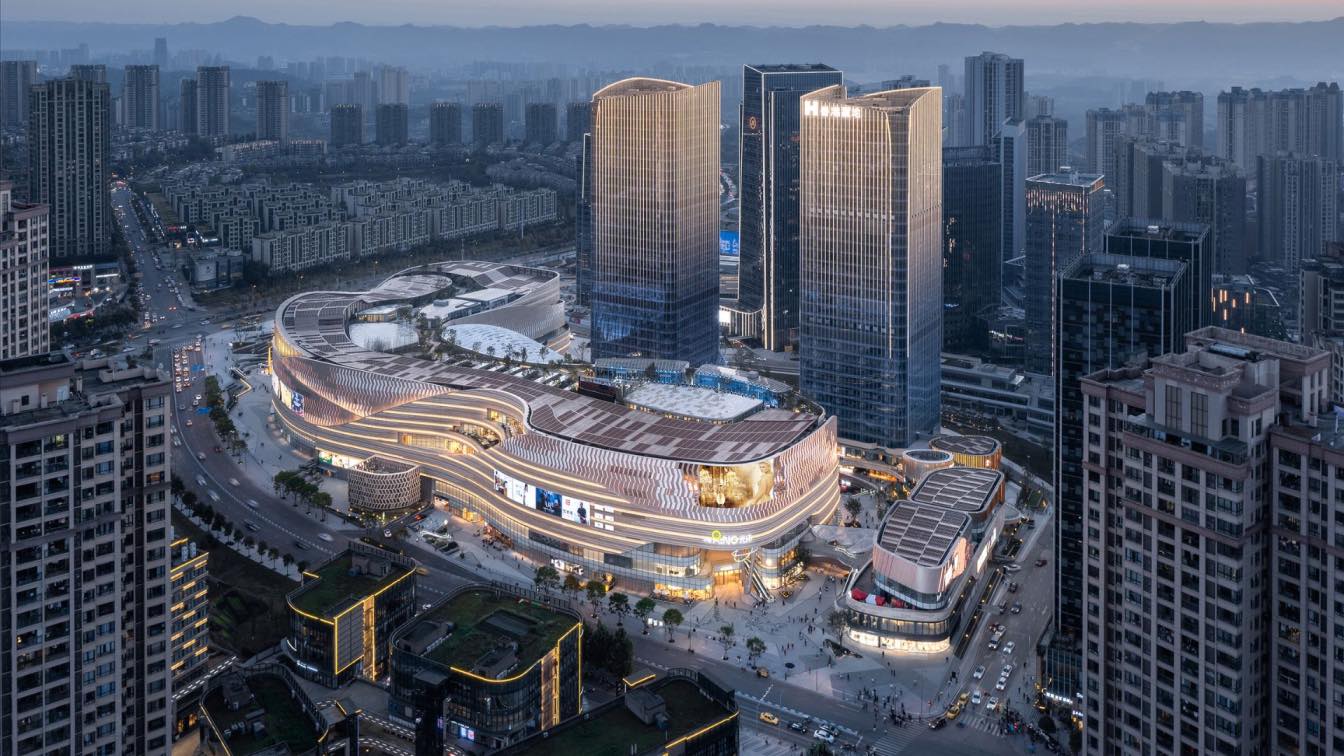 In 2017, as multiple places in China were being heavily impacted by smog, the top-tier developer Hong Kong Land was making plans to construct a shopping mall in Chongqing which would become known as "The Ring". The Hong Kong Land proposed a design which would combine eco-friendliness and commercial elements, creating an "integration of city and nature". The goal of this was to provide citizens with a shopping centre that boasts excellent air quality, offering Chongqing residents a breath of fresh air as well as ecological and healthier environment.

The idea of designing an eco-friendly commercial space has been around for a long time, but it has never really been achieved, due to the fact that the space needed for survival of plants is in contradiction to shopping spaces. However, PH Alpha Design took on the task, engaging in in-depth thinking and research which resulted in a revolutionary 7-level glass botanical garden design. A continuous skin is swept around to cohesively integrate the feature ‘Forest of light’ along with surrounding activities. After a design competition involving multiple design companies from around the world, PH Alpha’s innovative concept for a commercial space was highly praised by the owners, and PH Alpha was entrusted with the overall planning and architectural design for the project, including coordination and consultation for the project’s interior design, gardens, and lighting.

The Ring held its grand opening on April 23, 2021. The project is situated in the central commercial zone of Liangjiang New District, in Chongqing, China, and linked to Metro Line 5. The total construction area consists of 420,000 sqm, including a super-large 170,000 sqm concentrated shopping mall, a 20,000 sqm commercial street, and two super 5A grade office buildings with a combined area of 110,000 sqm.

No major alterations were made to the plan from its beginning to its end stage. The Ring’s L-shaped design occupies the city’s main eastern and southern display faces, and the two 150-metre-tall office buildings are positioned on the western side, below which is an exclusive drop-off area for the office. An L-shaped commercial street works in concert with the interior of a shopping mall, creating a comfortably scaled scenic dining court. The Forest of Light（Twilight Forest） botanical garden’s glass atrium becomes the focal point of the flow of activities around the shopping mall and retail street. 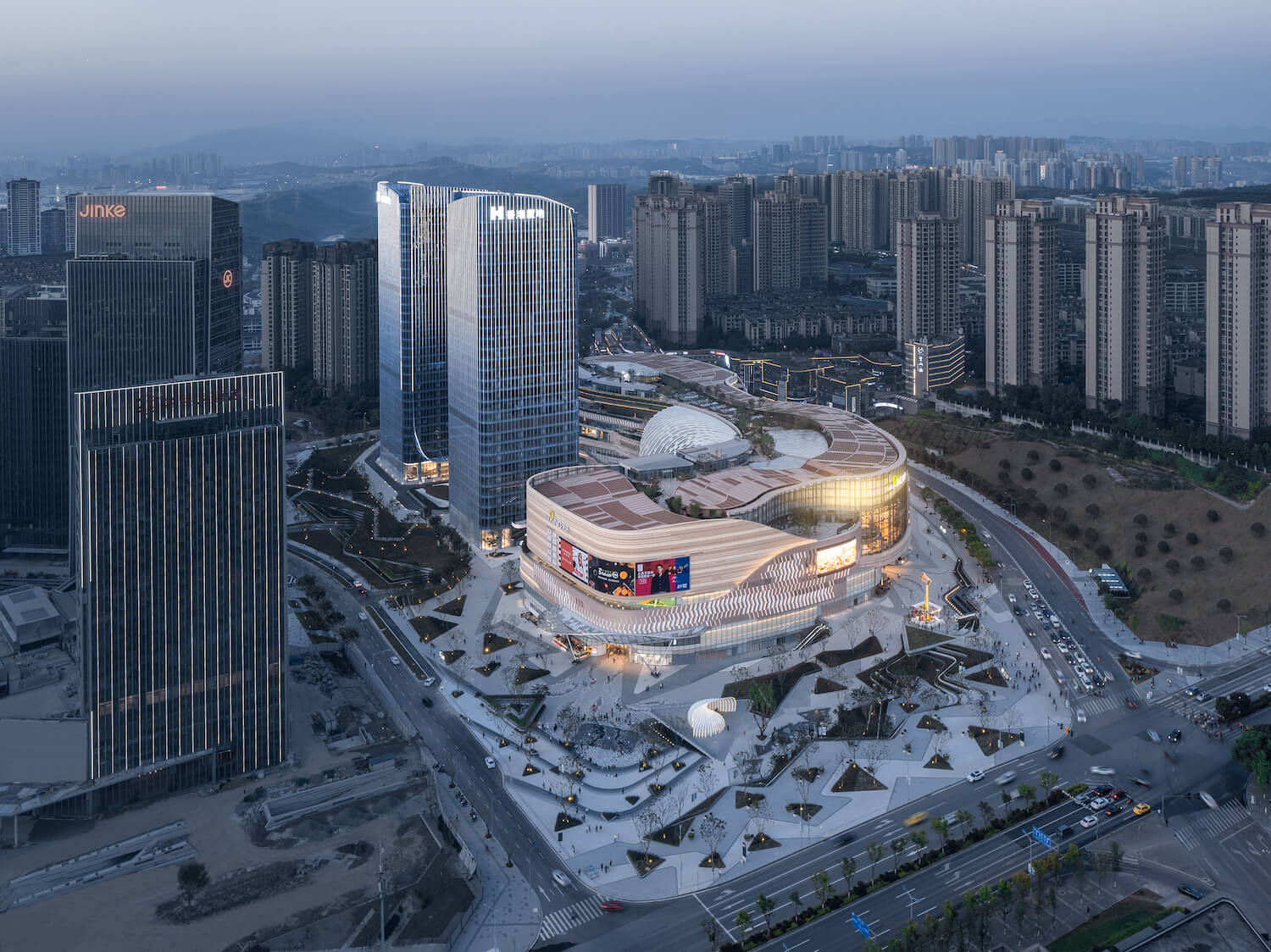 The Ring’s unique spatial design is actually based on in-depth assessment of traditional shopping spaces and their product form. Most traditional shopping malls adopt an internally-closed, descending system with a variety of shops which are linked by an inner atrium, and visitors must make consumption choices by walking through a restricted inner corridor. Consumers are treated purely as “consumption robots”. For a long time, as shopping centre designs were constricted by these conventional ideas of commercial space and focused solely on practicality, few design breakthroughs were made. But consumers’ increasing demand for better quality consumption and leisure could no longer be satisfied by simply making minor adjustments to a central atrium and holding conventional exhibits and seasonal activities to spice up a dull space.

The Ring came about during a time when people were reflecting on and discussing traditional consumption spaces. Designers began brainstorming ways to improve the quality and lasting appeal of consumption spaces by creating immersive experiences. Hong Kong Land wanted to create a commercial space which was eco-friendly, and PH Alpha made full use of this opportunity, using creative thinking and research to place a relatively independent, 48-metre-high indoor botanical garden spanning seven levels, integrated with commercial complex, right within the flow of the commercial space – the Forest of Light. This feature not only resolves the conflict between the physical space needed for the shopping area and the botanical garden, but is also a design breakthrough because of its unique approach from traditional shopping mall designs which featured closed internal corridors linked to an atrium. This was revolutionary for commercial space design, creating a totally new design language.

The Forest of Light – The horizontal and vertical lines of the towering botanical garden and the commercial space flow into each other in multiple dimensions, seamlessly connecting to the commercial space. The dining area is situated on the top two floors, while the rest of floors house other open shops. Careful line-of-sight planning and spatial construction maximizes the extension and interaction of the botanical garden’s greenery within the retail space. Two bridges zigzag in different directions, connecting two different floors, thereby giving visitors an immersive ecological experience that allows them to linger among canopies. The botanical garden’s theme focuses on the story of the origin of life in the ocean and rainforests, and features a diverse range of plants. The combination of a waterfall and a tree which hangs suspended in the air creates a magnificent experience.

The botanical garden’s space incorporates areas where consumers can switch between shopping and leisure at any moment. Customers also feel less “besieged” in this space, the experience reduces pressure and anxiety compared to that of traditional commercial spaces. This helps to improve the quality and affinity of commercial space, which makes it welcoming for users. 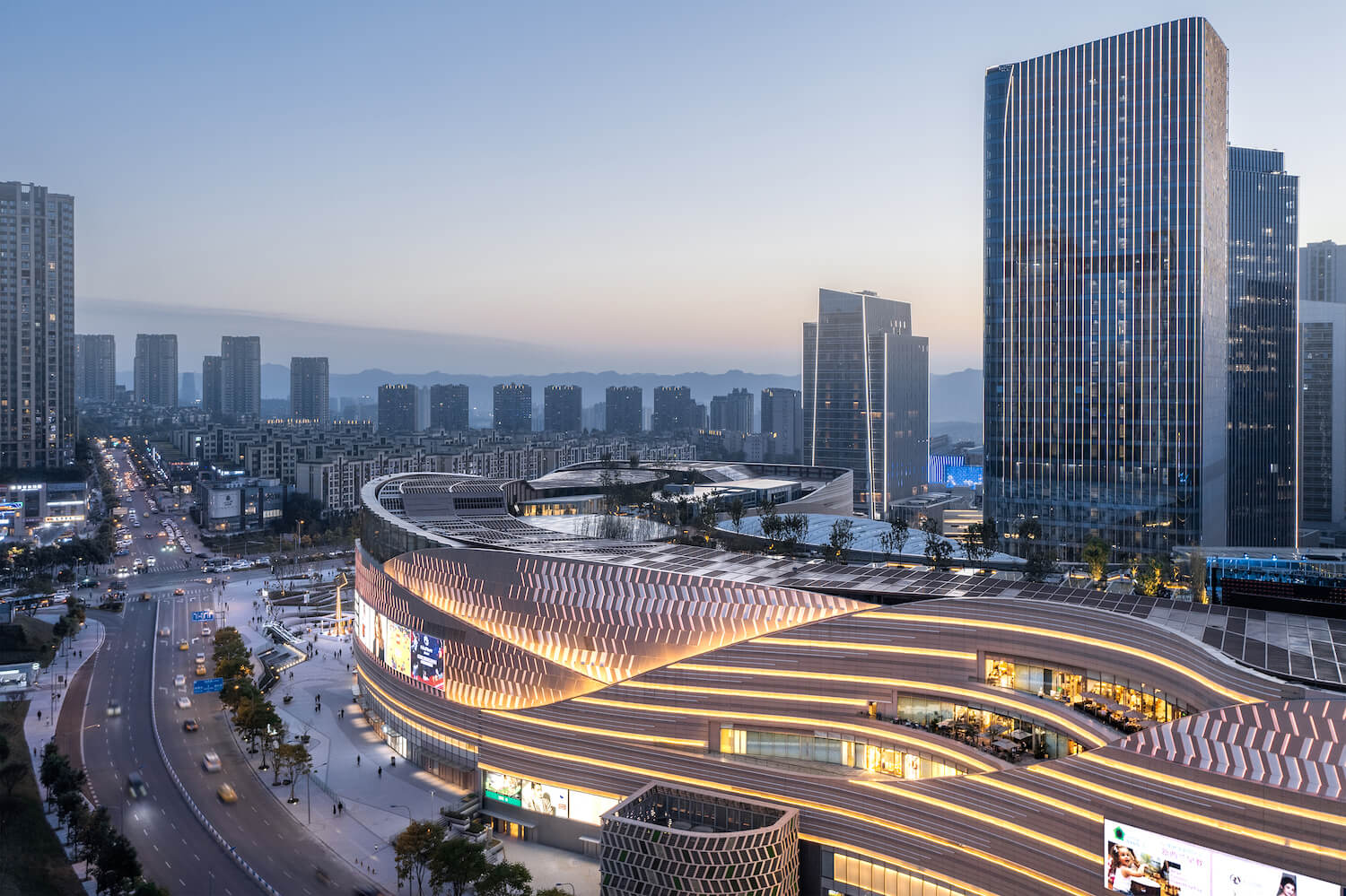 Other than the botanical garden, PH Alpha further explores the possibilities for improving and upgrading the traditional commercial space without impacting business operation. On the upper part of the other side of the main circulation, above the main entrance to the city in the southeast corner, an open shop model opens some of the flow within the space, and two interlocking S-shaped slabs create two overlapping open spaces, which further alleviates the sense of claustrophobia that consumers feel, and provides more space for social interactions as well as a clear line of sight and visibility. Large-area folded glass is used on the facade to reveal the interior space to the city while also establishing a dialogue between indoor consumption and urban life.

The Ring also contradicts traditional, practicality-focused design concepts and maximized the area for social gatherings by utilizing hollow areas. For instance, the shared family area with a Small World Children' theme atrium located on the 3rd floor; the 4th floor features a "Free+" basketball court and sports atrium; the 5th and 6th floors are dining areas with more external seating, shared space, causing storefronts to be set further back and opens the line of sight of the dining area. 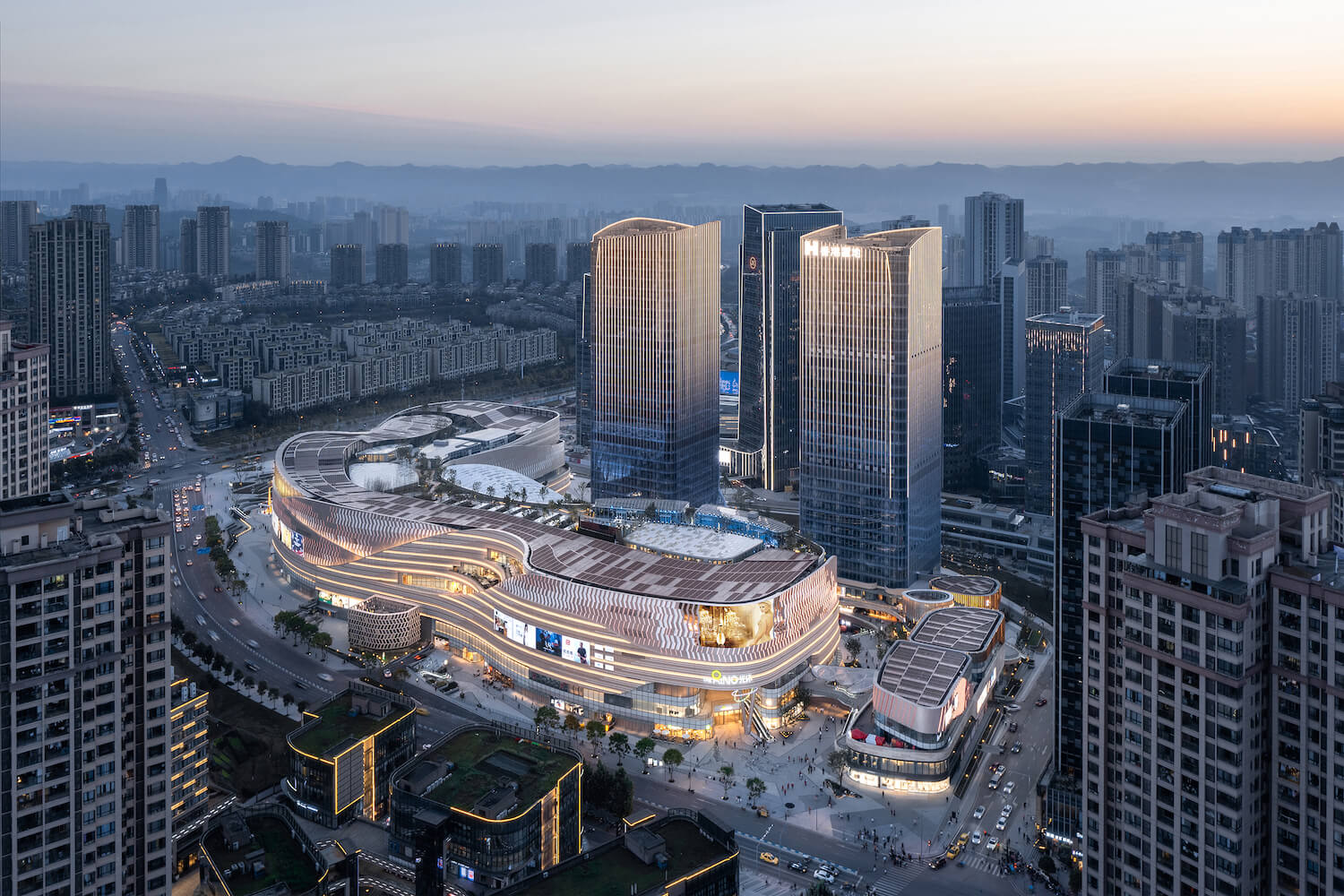 3. Creating a multi-layered shopping experience within the commercial street

The glass botanical garden becomes a “Focal Point” and connection point which integrates the shopping mall’s internal and external commercial streets, creating the interaction between the indoor and outdoor areas. The commercial street consists of two floors located on the side of the office towers. The side of the shopping mall has a set-back landscape design which creates a “terraced” appearance, reducing the volume that the structure creates on its environment. The ground level’s garden design combines luscious plants and water system, along with numerous exterior features, forming a wonderful scale and atmosphere for a shopping district and making the street area one of The Ring’s main appeals.

Vertically, a rooftop garden plays an important role in guiding visitors upward. The outdoor event stage situated outside of the movie theater on the 5th floor connects in an upward direction with the rooftop garden. It can be used to organise events of various themes, creating an activity space in the air, outside of the roof and the entrance square. This allows greater opportunities for commercial events.

The elevation design once again draws inspiration from natural elements, adopting a design concept of "cloudy mountain peaks". Using flowing lines to set an atmosphere of a sea of clouds, the dynamic movement of the lines reinforces the entrance and showcases the design’s pursuit of being local, cultural, and artistic. The overall elevation design is romantic and elegant, expressing care for consumers. A rational consideration lies beneath this emotional expression. The grains of the elevation follow innovative parametric design logic to derive standard modules and achieve standardized modules, which are full of art, rhythm and beauty.

Since opening, The Ring has caused a huge commotion and gathered a lot of attention in the industry. The way it subverts traditional shopping spaces and makes breakthroughs, as well as its successful use of existing landscape/inclusive of landscape elements has become a focal point for discussion, and gained the project recognition as a model within the industry. Over the past year, The Ring’s architectural design has also been awarded more than ten Chinese and international awards for design, the more illustrious of which include Asia’s “Best Retail Development” Gold Award in MIPIM Asia Awards 2021 and Jury Winner from Architizer A+Awards.It is also the only Asian project to rank within the top three for the “Best Shopping Centre” award in MIPIM Awards 2022, receiving major international recognition.

In the first year of its opening, The Ring has not only promoted the development of Chongqing’s Liangjiang New District and reshaped the geographical model for Chongqing’s commerce, but has also been named as a new city landmark, receiving over 7 million plays, described in comments by keywords such as “at the new landmark”, “nature”, “lively”, and “warm”. 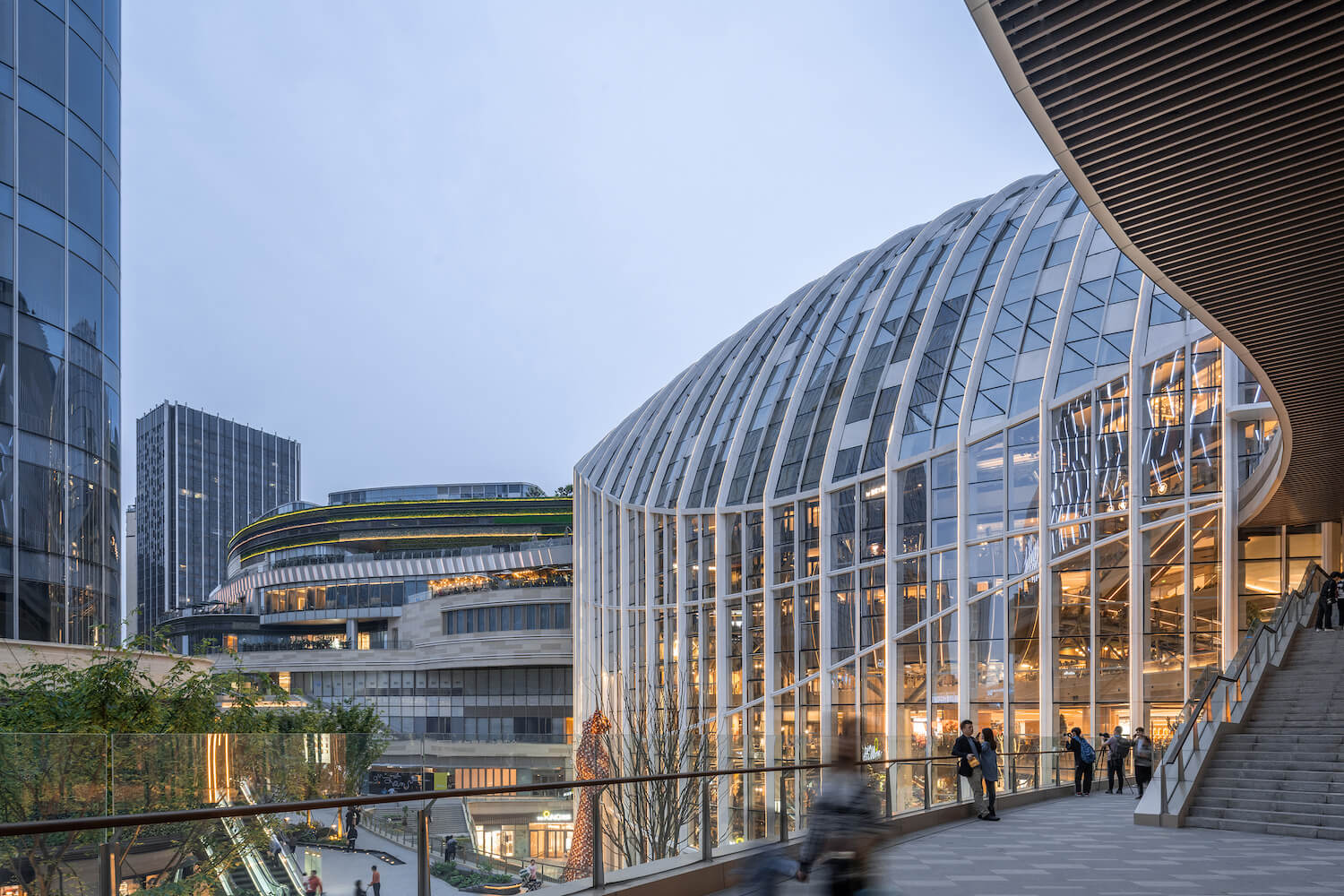 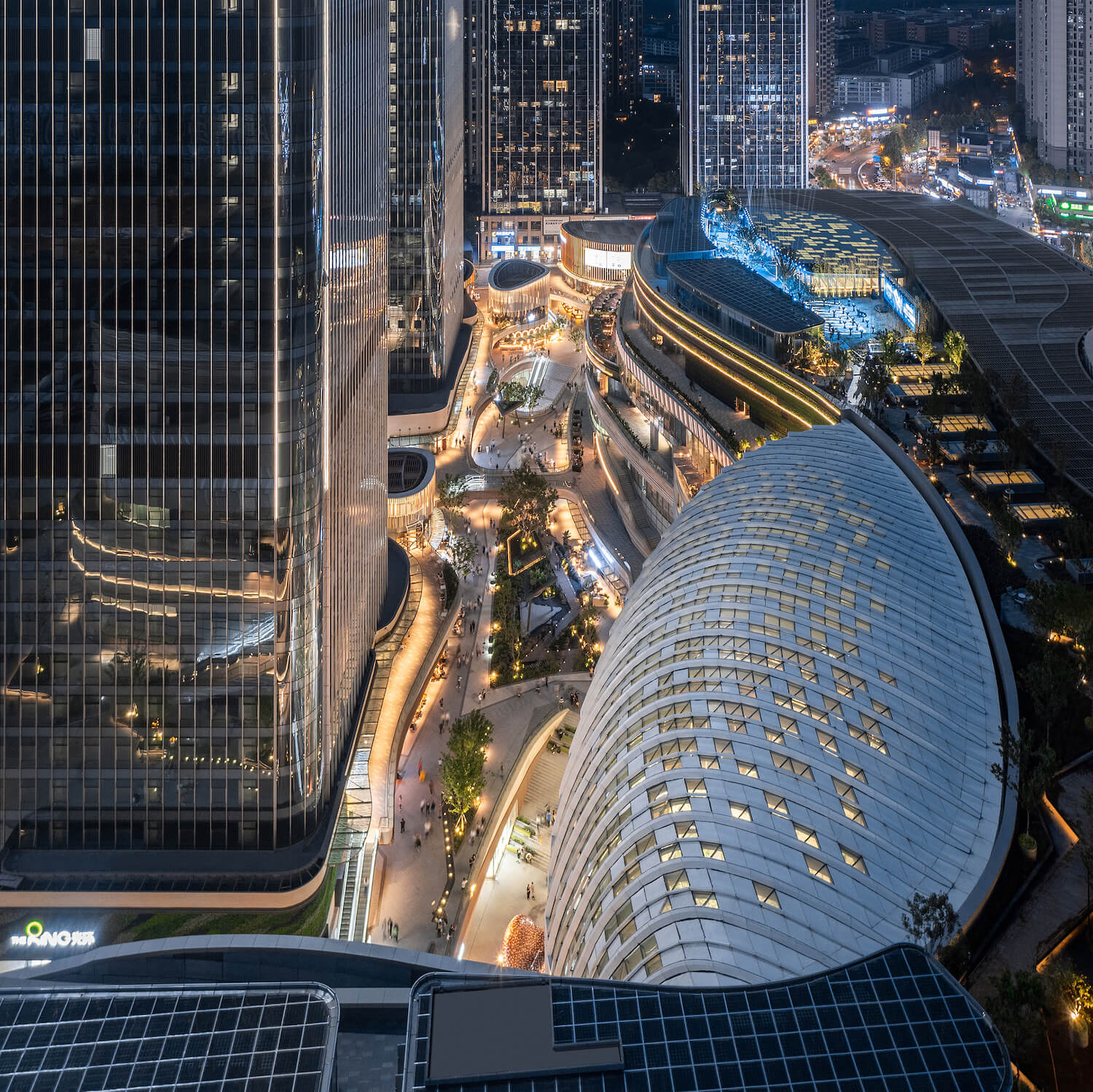 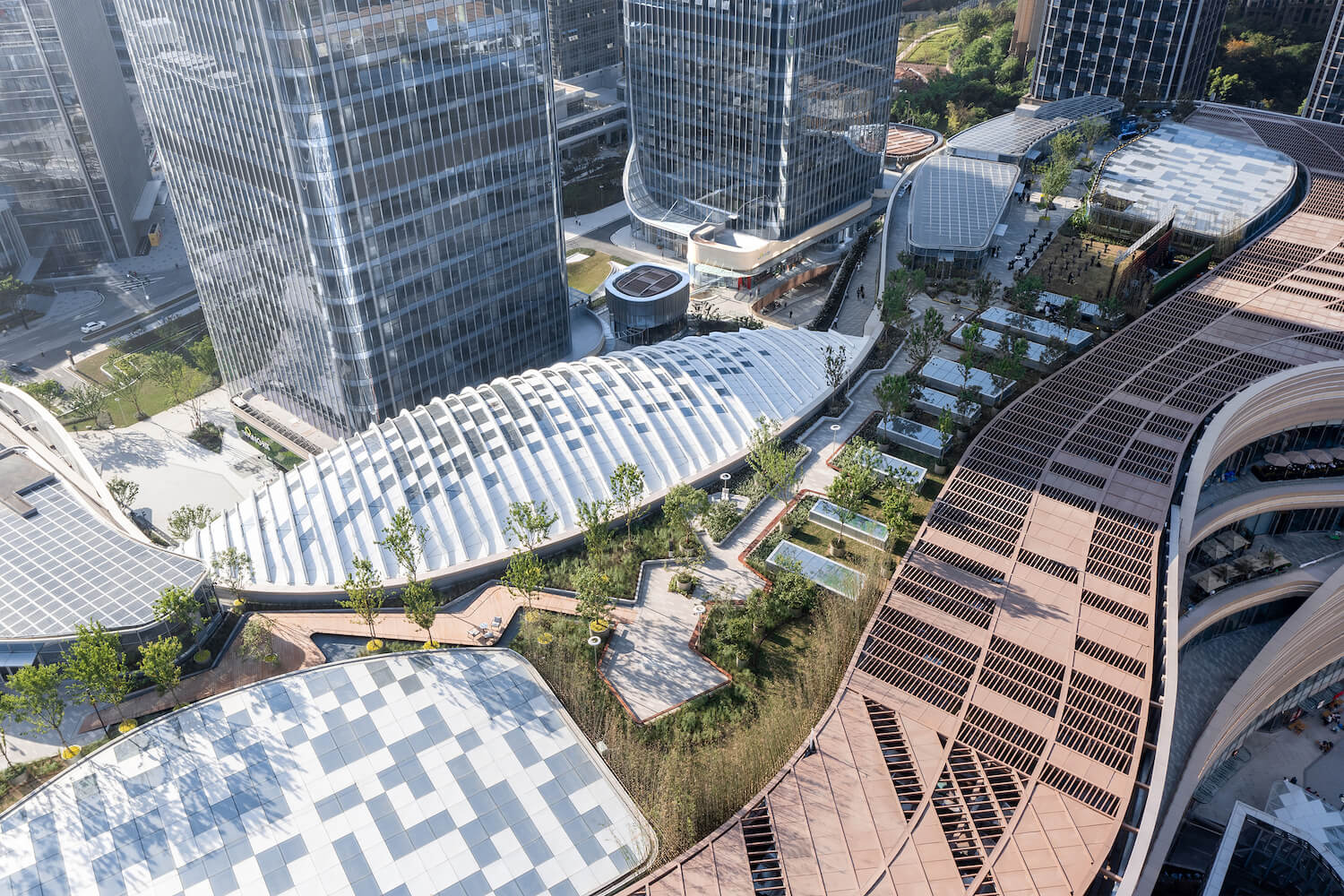 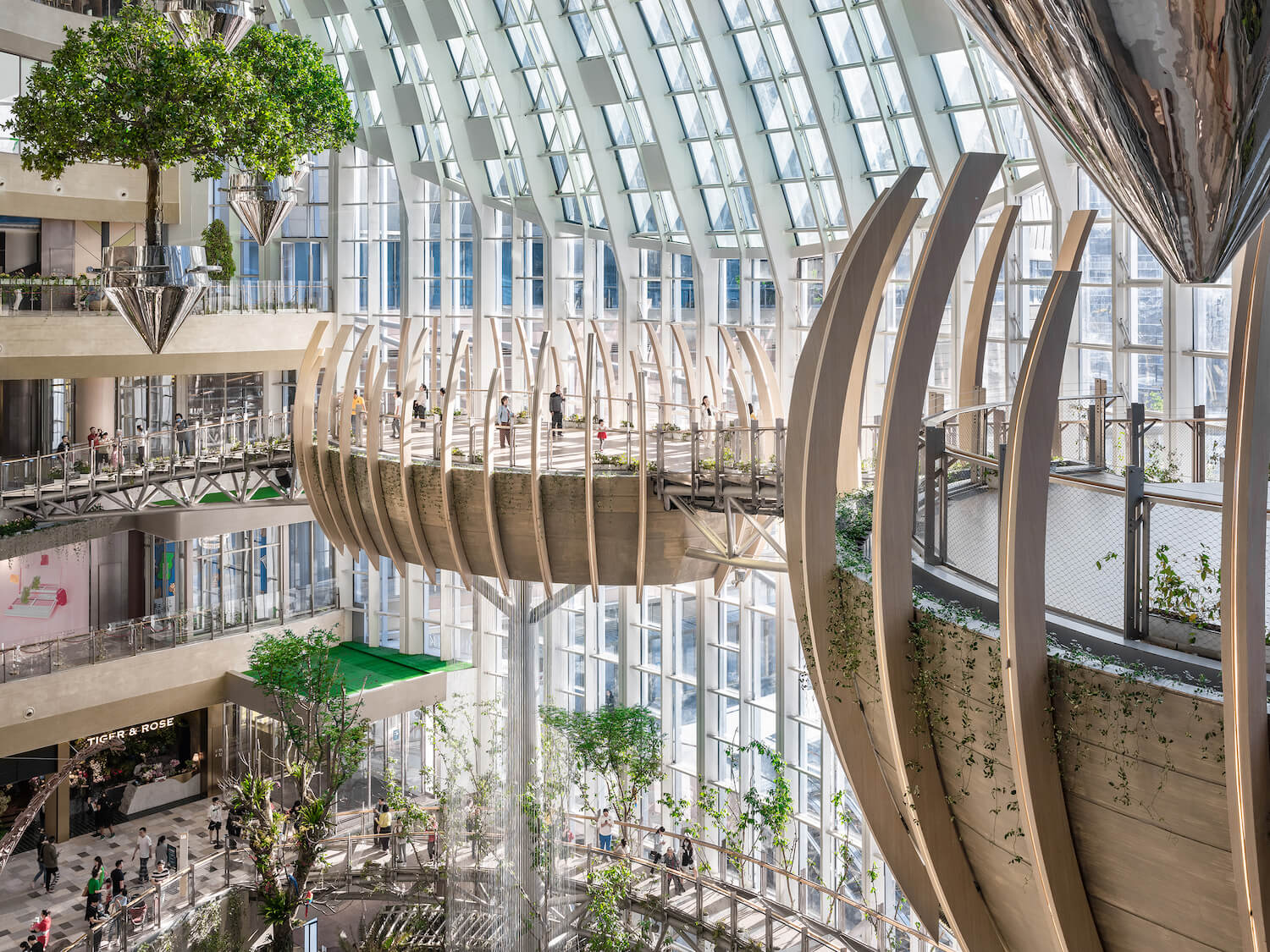 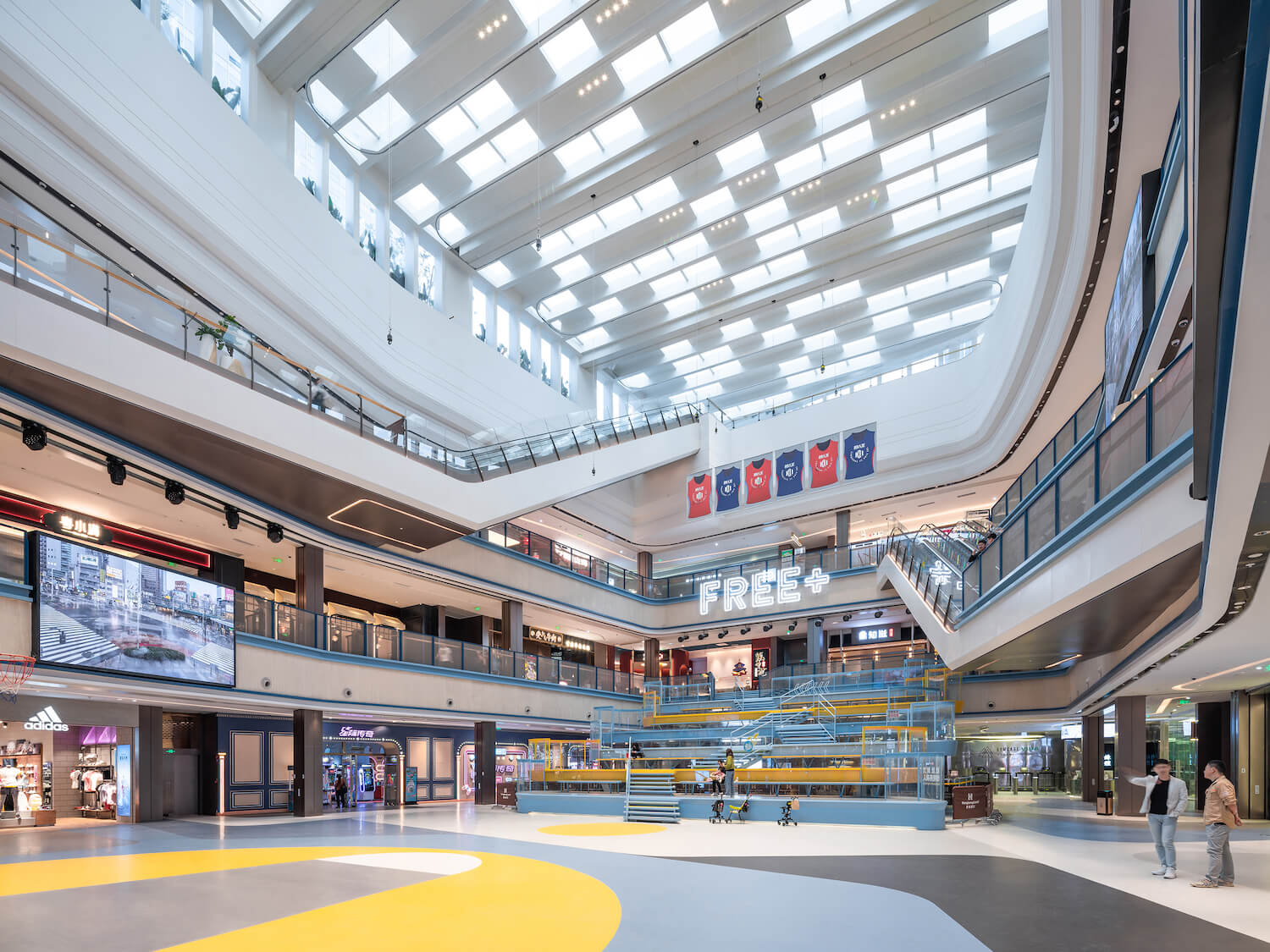 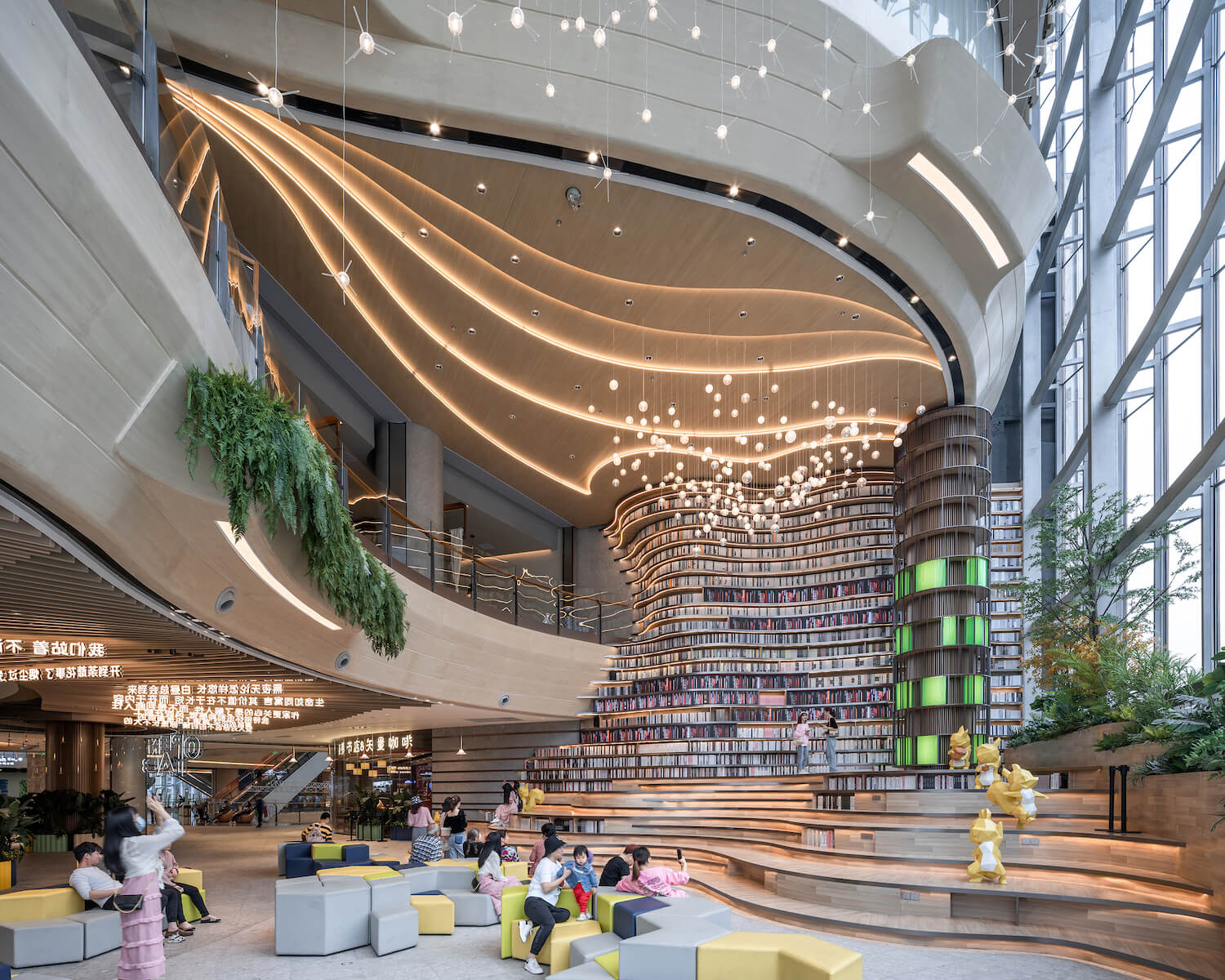 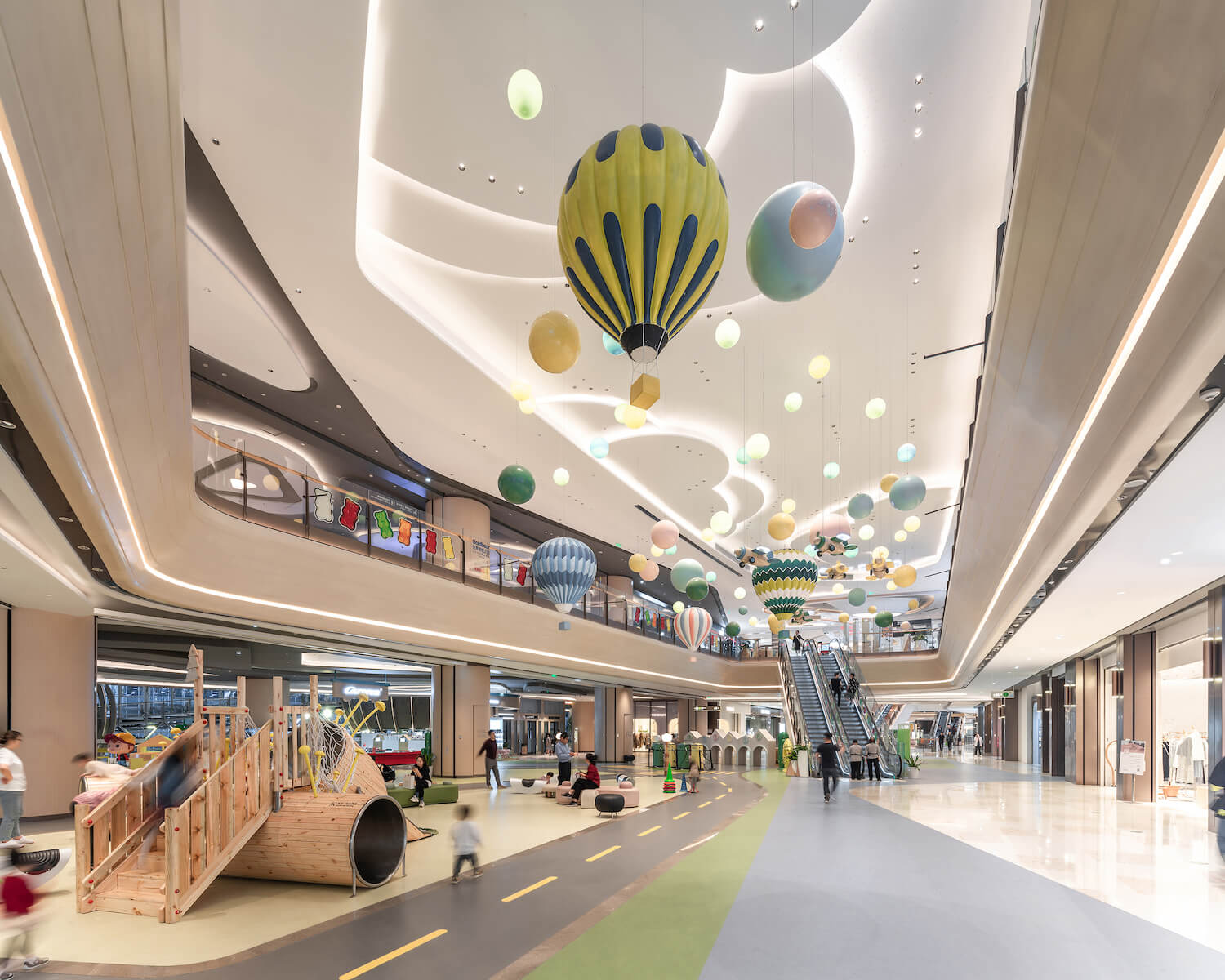 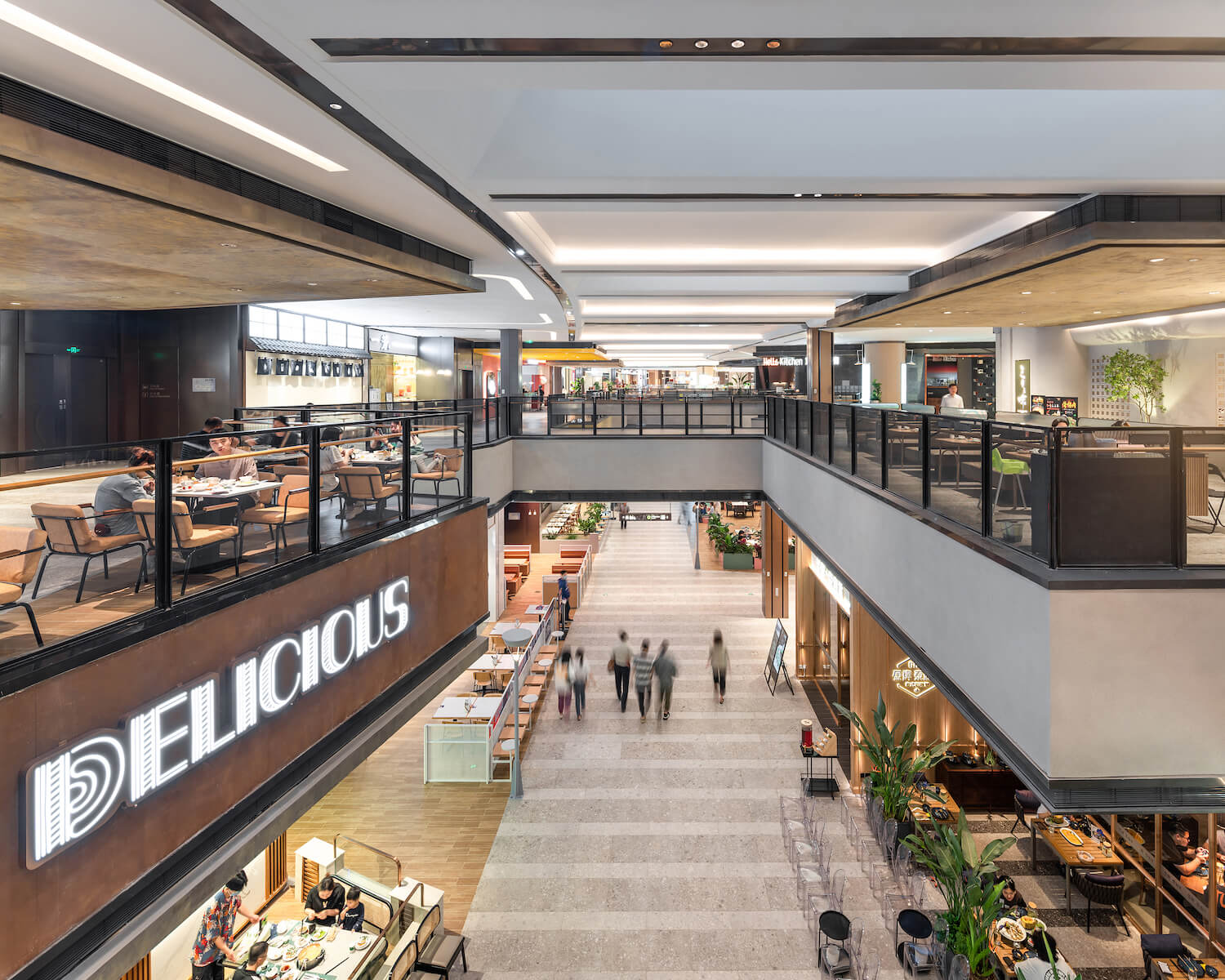 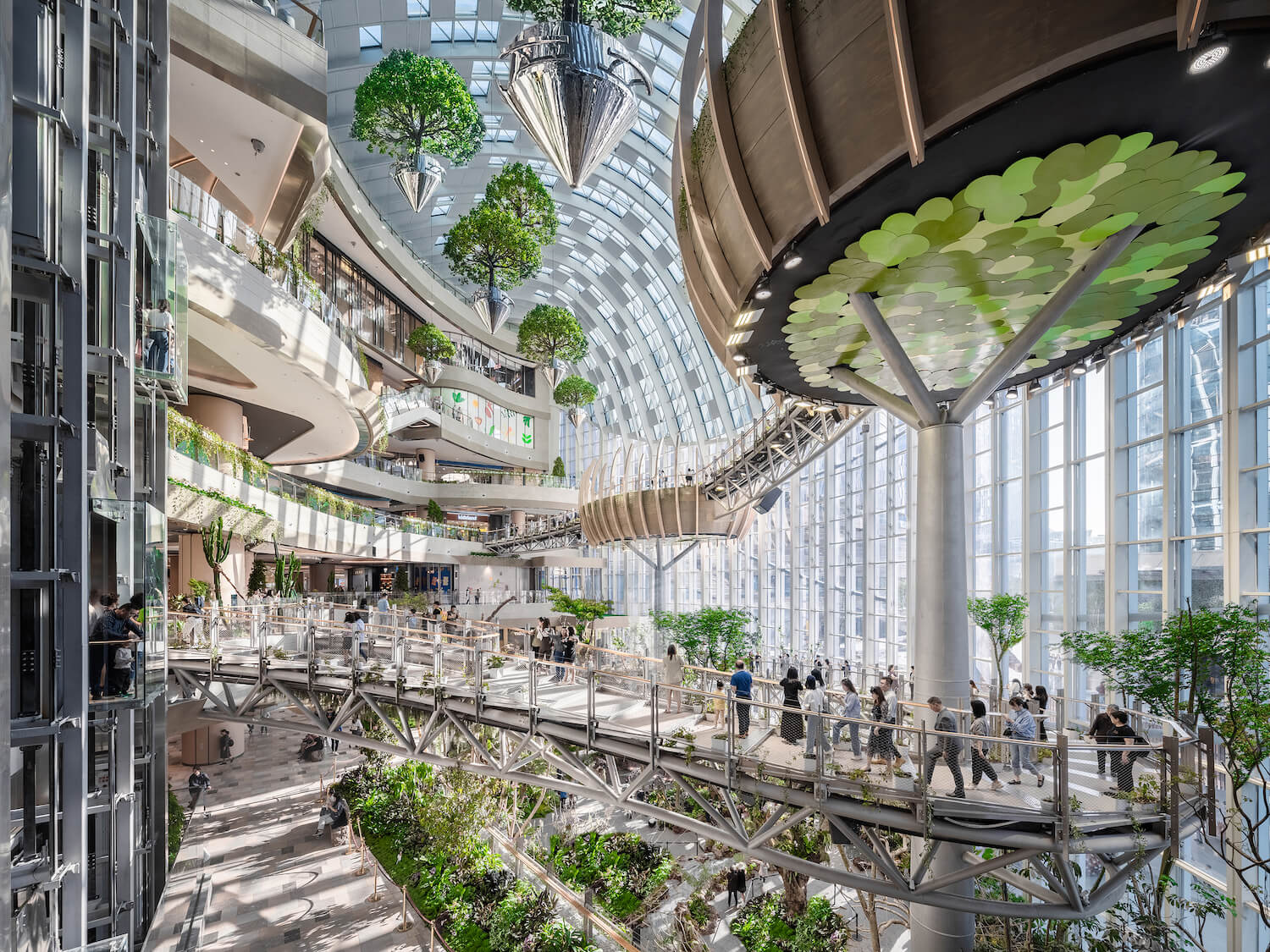 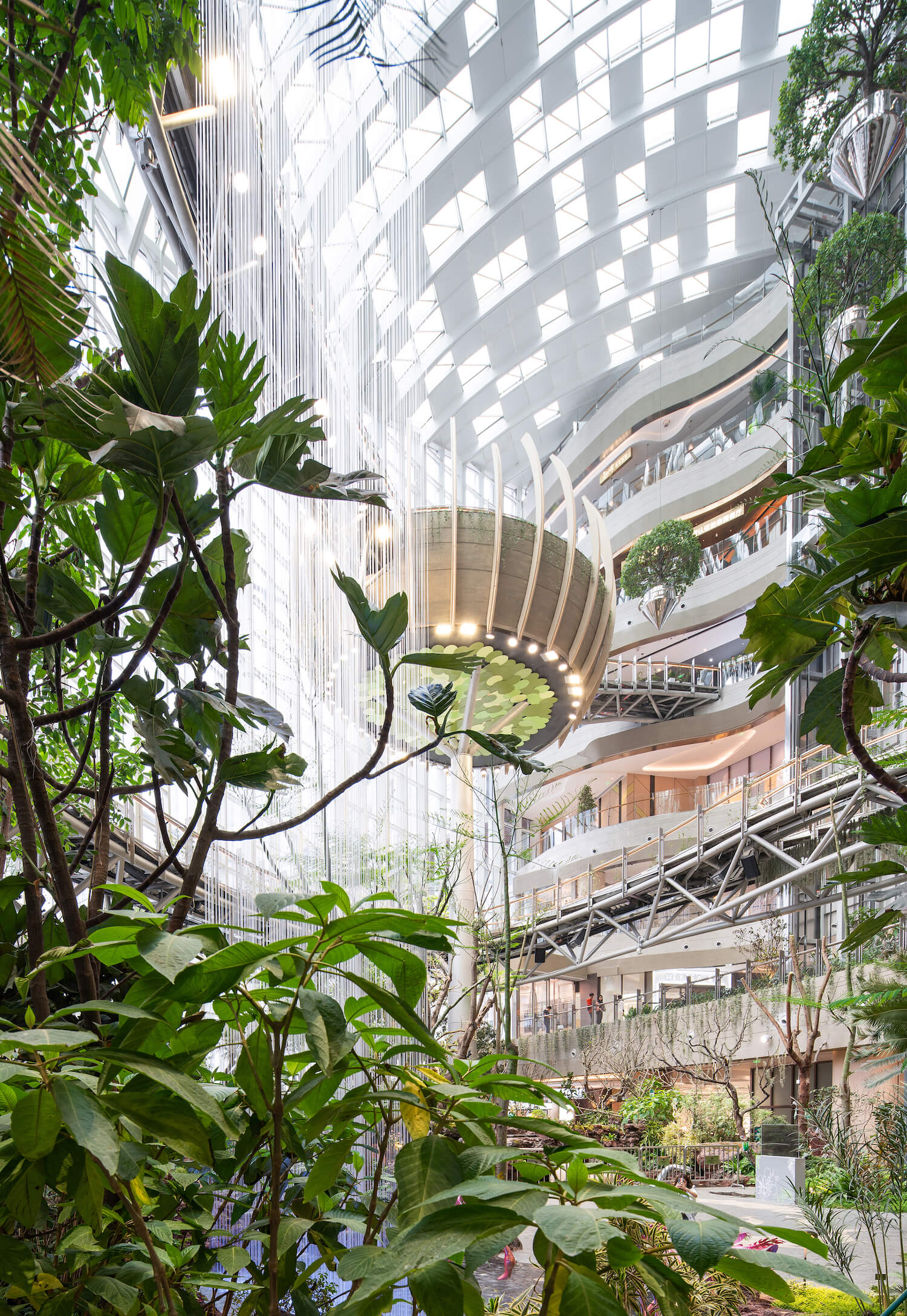 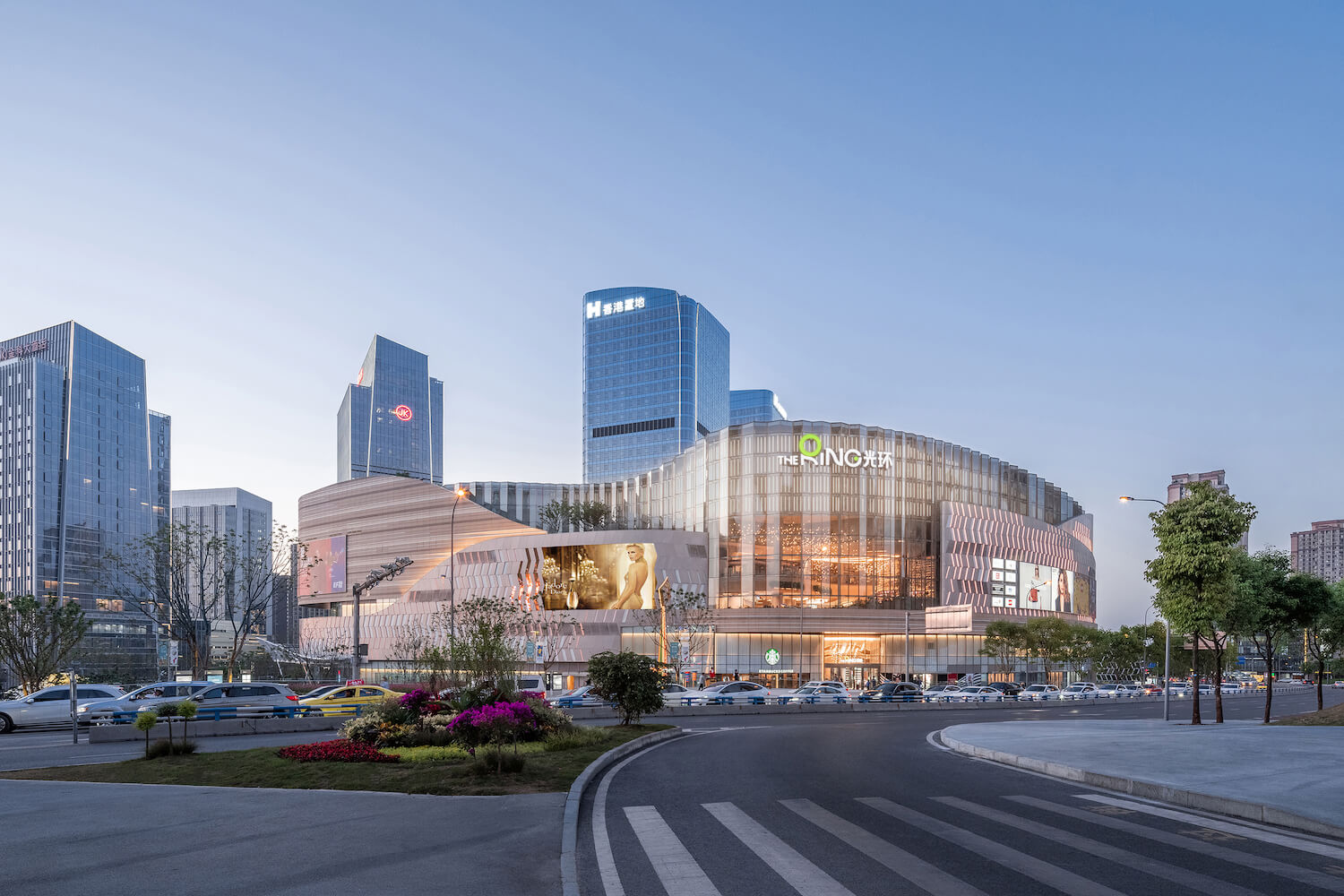 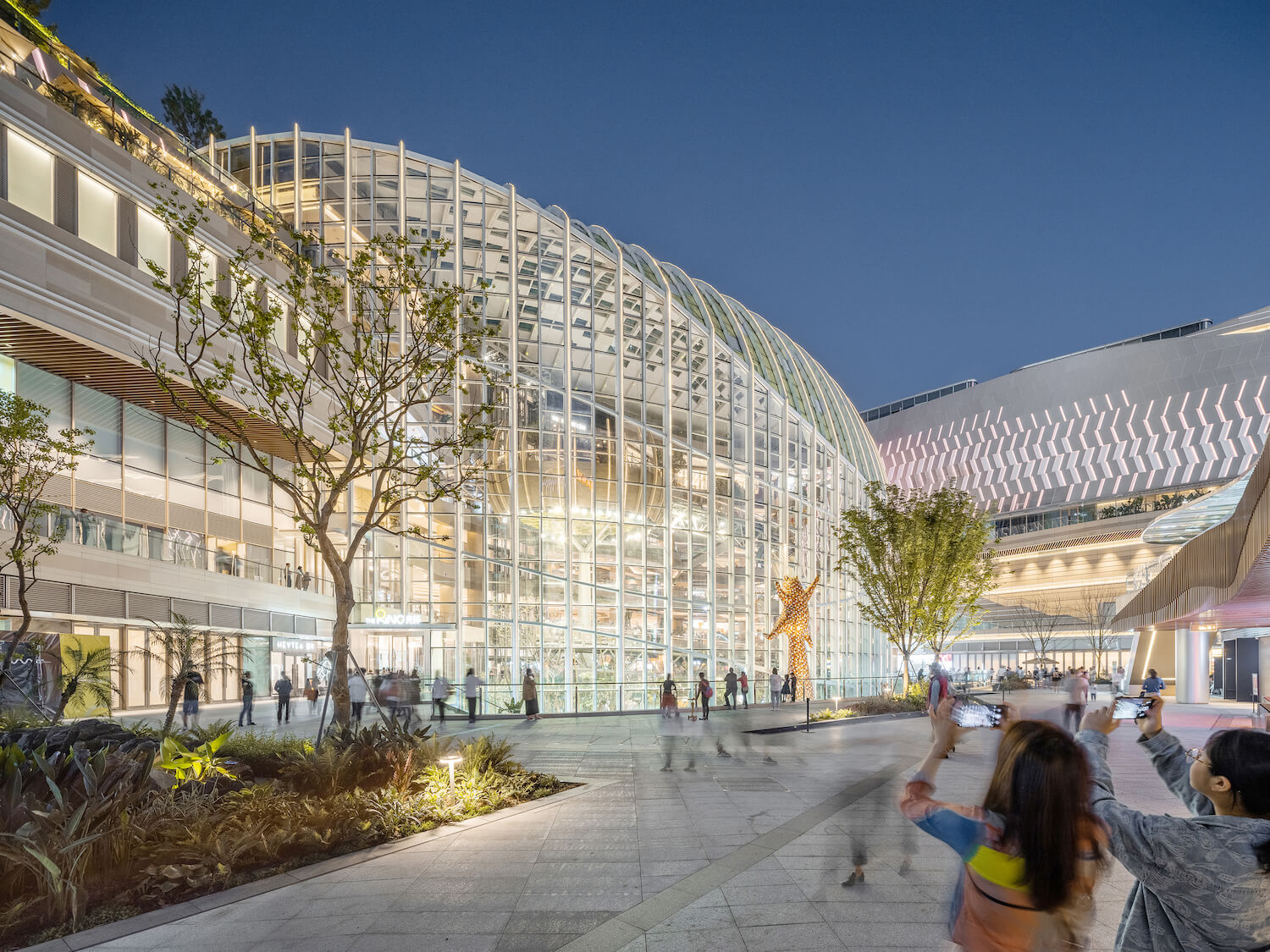 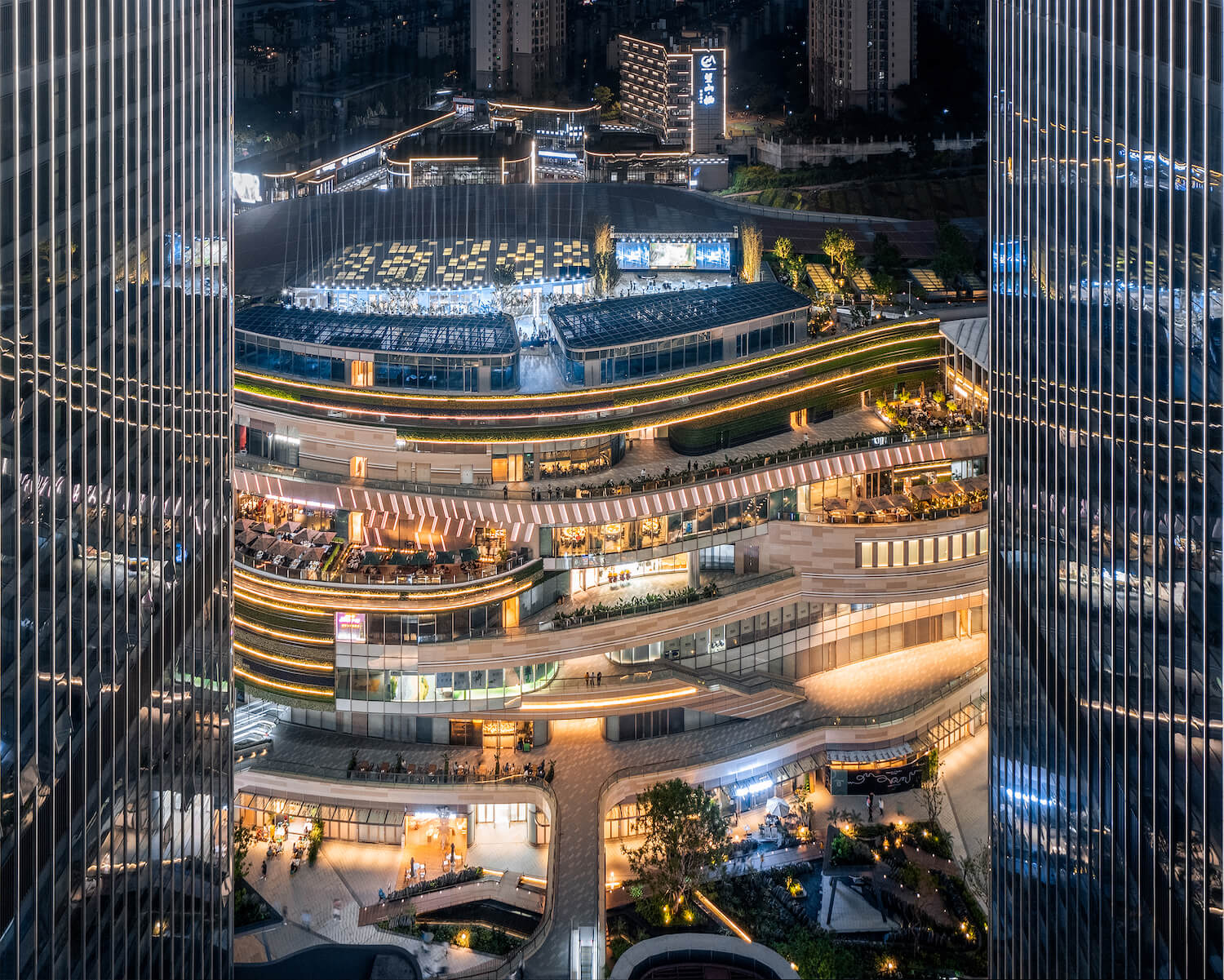 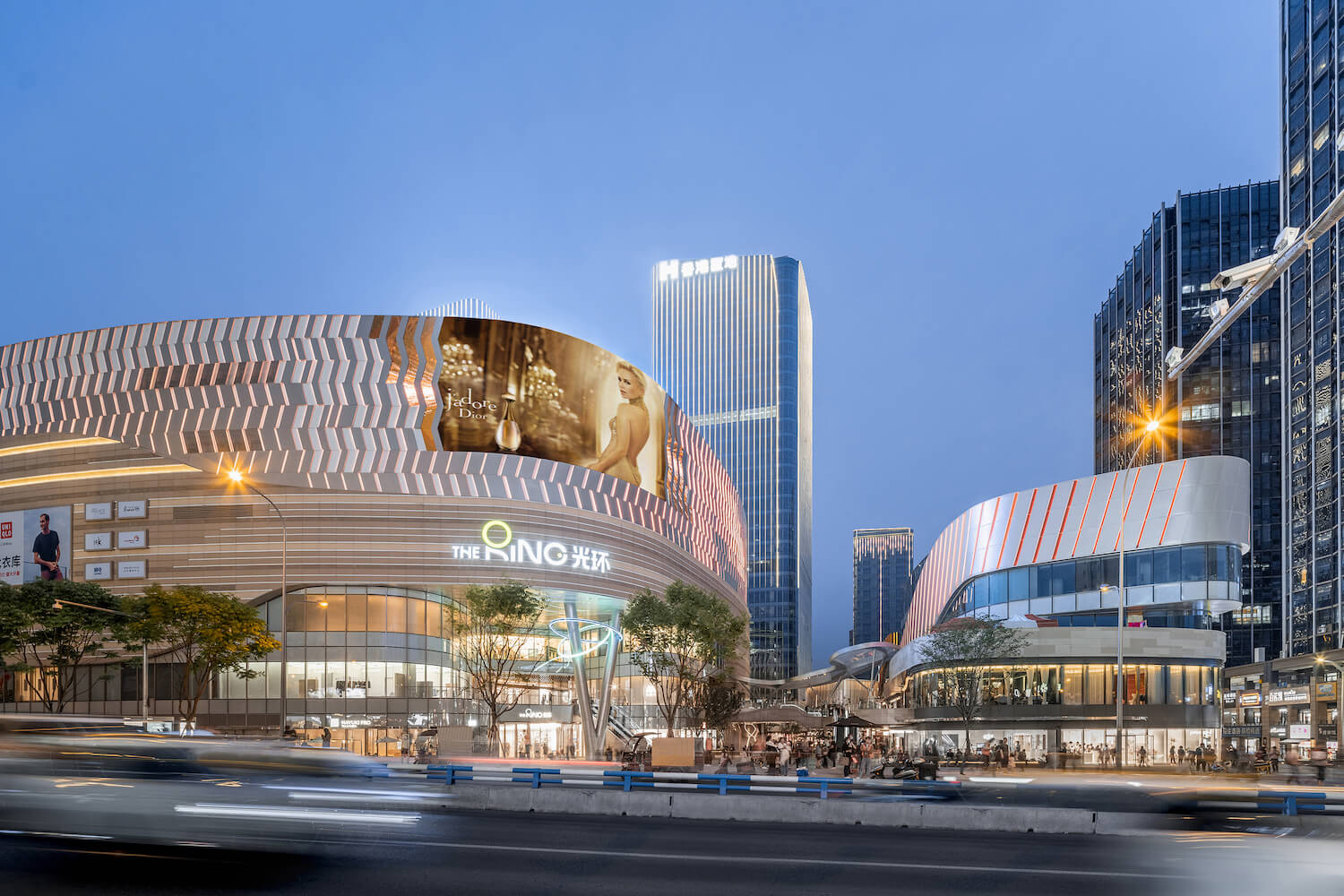 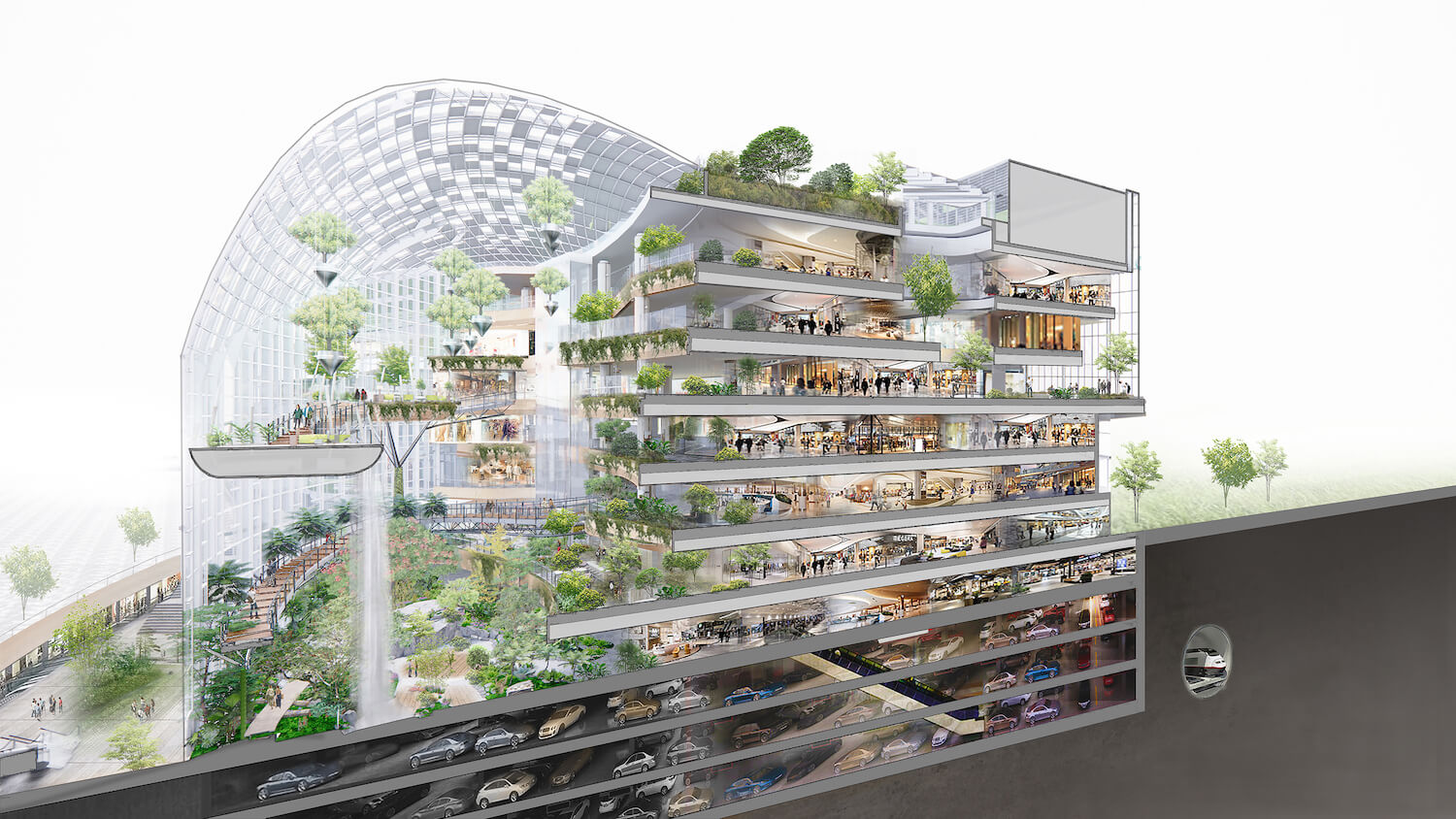 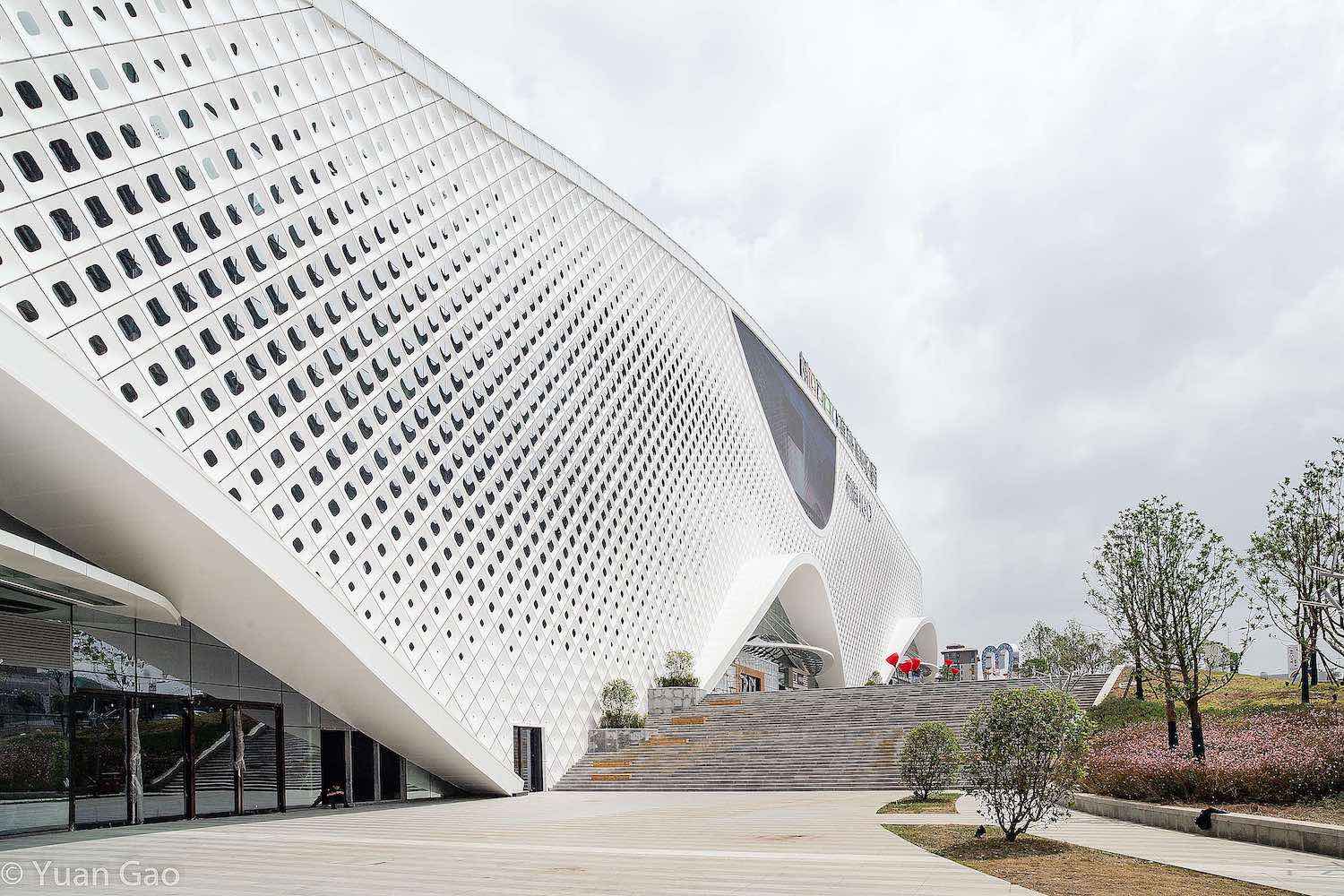 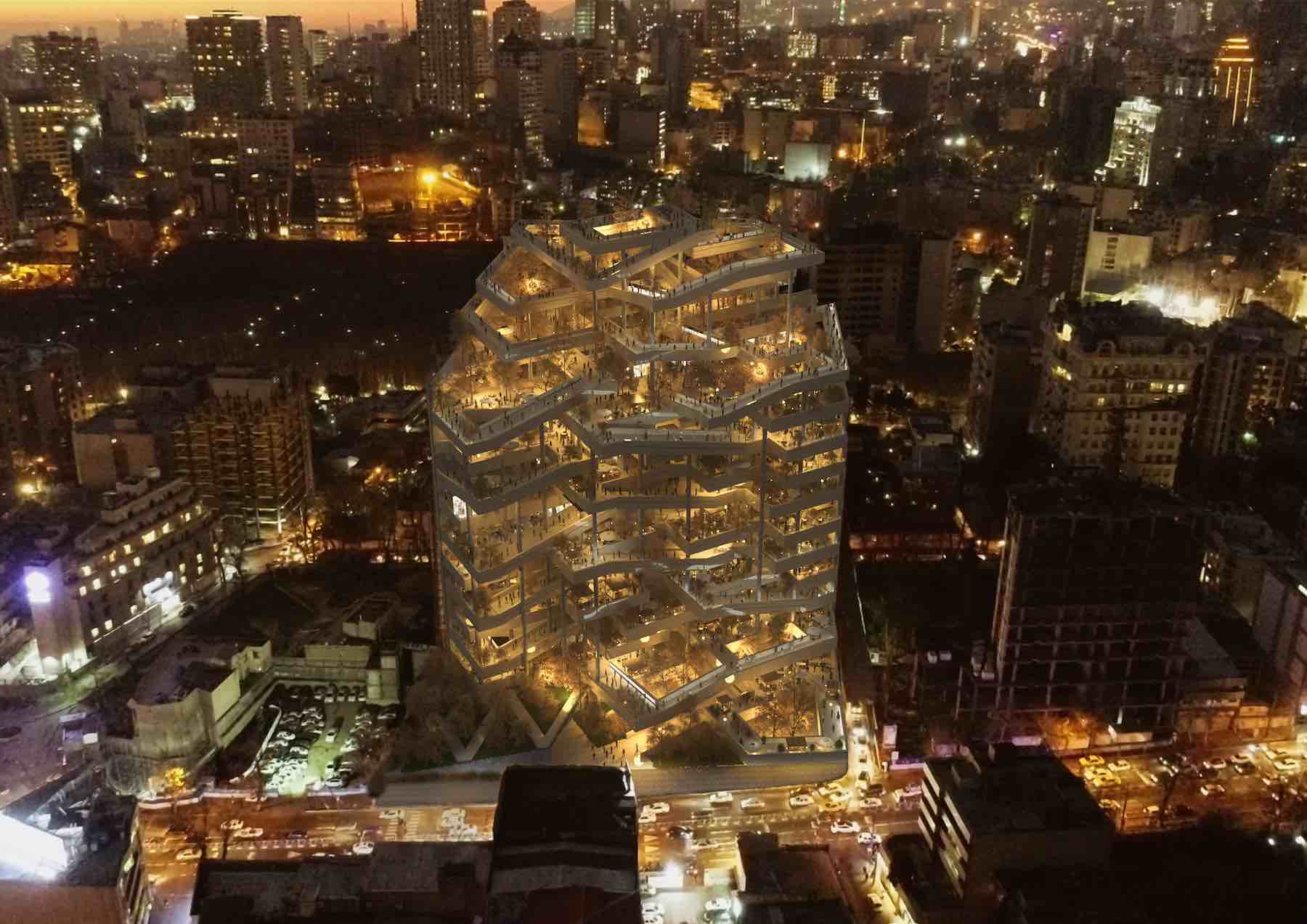 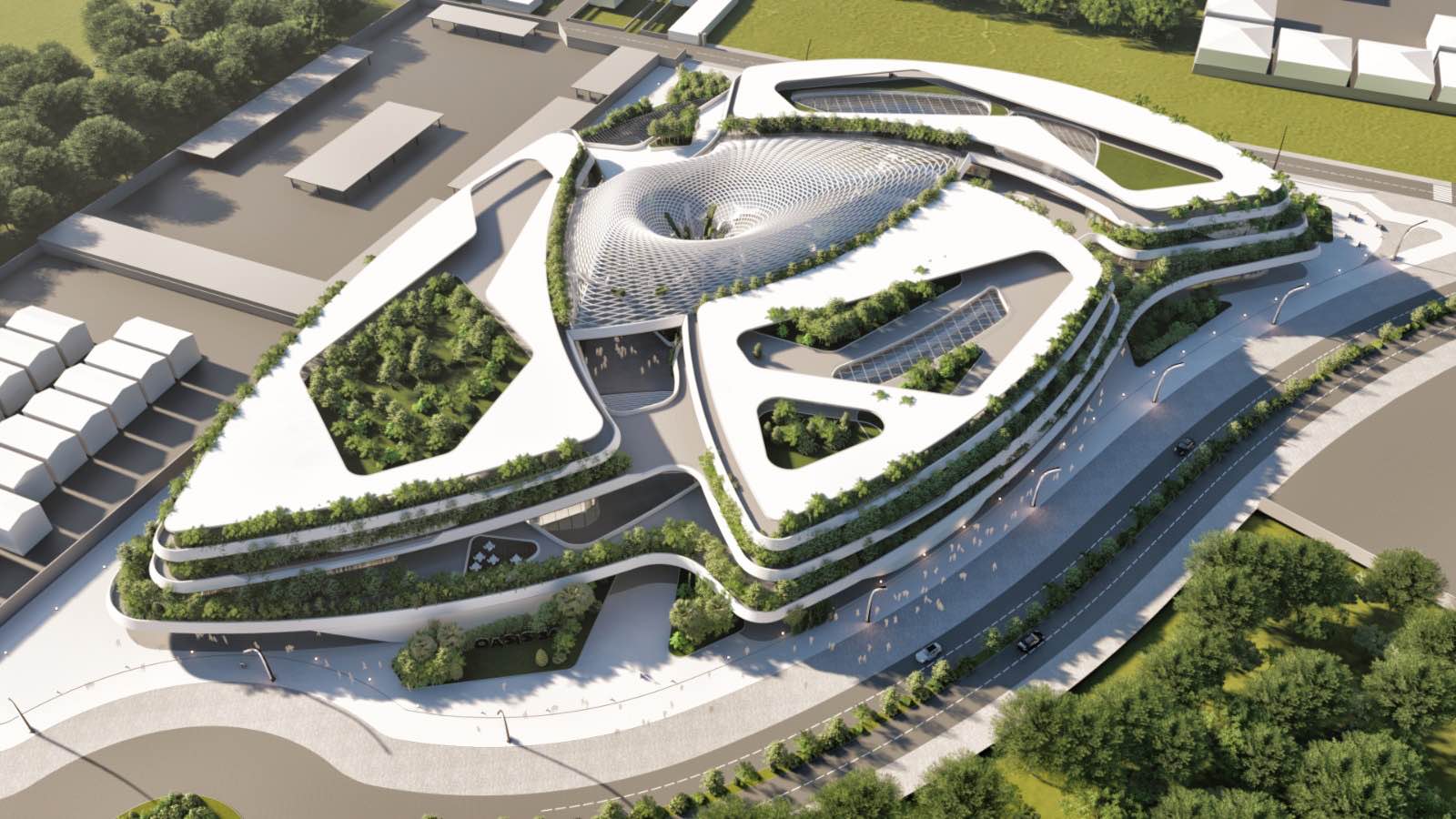