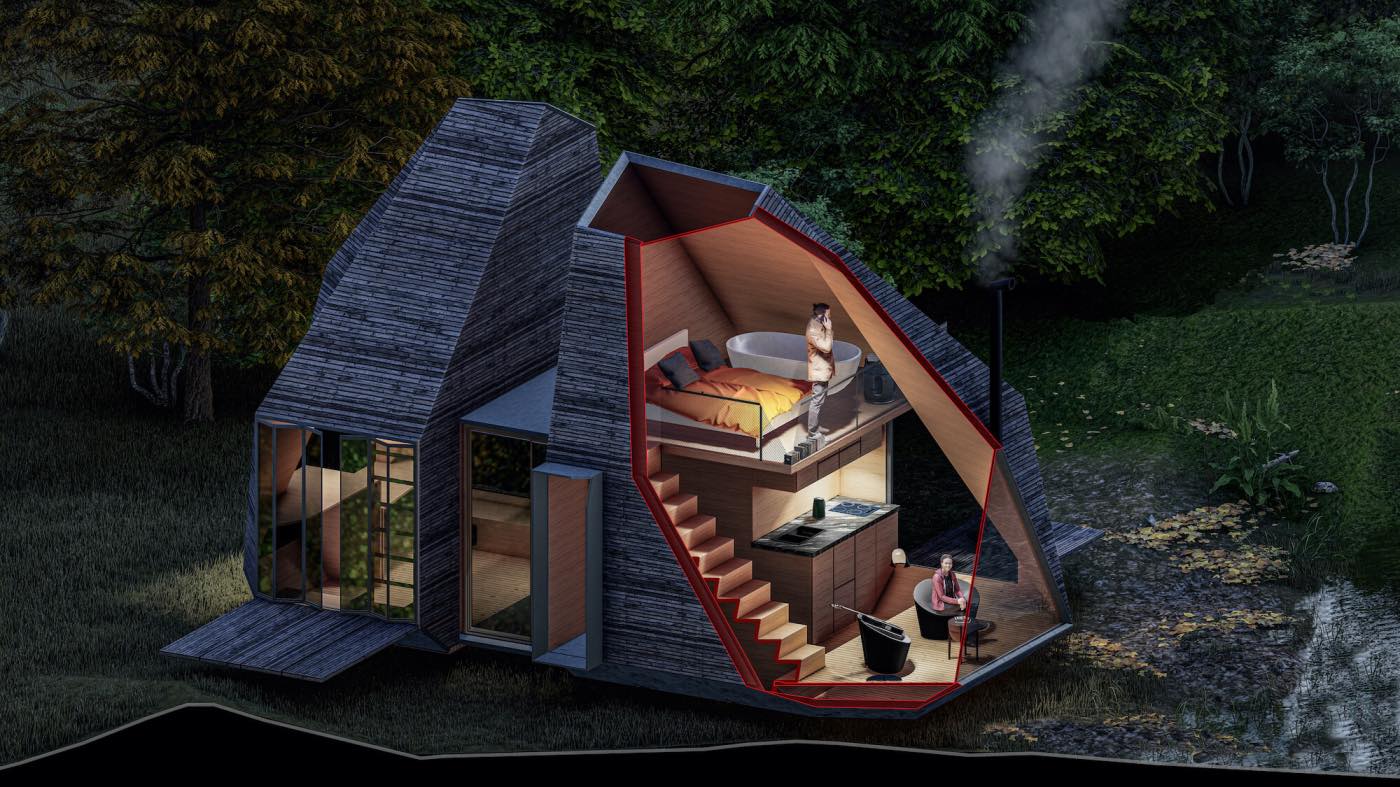 GASP is a Tiny House Project designed by Cankat Seyret in order to create an alternative minimal living environment within the nature or any desired site. Abstract concept of the project is inspired by the Covid-19 virus, human lungs and oxygen molecul in chemistry scheme. Gasp (n.) means a moment of hardness to breath, shortness of breathing. Architect creates a perspective of this moment in a different time scale in order to interpret the physical gasping symptom of covid-19 as it is a mood of tiredness and a necessity of tranquility caused by busy and exhausting city life.

Project is designed in two diffrent modules which makes it able to become transportable between diffrent sites according to the necessity of users and clients. Abstract conceptual elements of the project also take part in a problem solving process about this modularity action. Human lungs and oxygen element has something in common, they are both have forms occuring by two masses joining together by a lighther element which allows the transaction between them like the windpipe of the lungs and the chemical string between the oxygen atoms in order to create a molecule.

The sliding motion of the masses and rotating function of the openings to control the degree of enclosure is inspired by the expanding motion of the lungs and oxygen string bridge. The geometry of the modules are also inspired by the human lung form but in a more abstract triangulation interpretation. Even if the project is optimally designed for a couple, their children and their pets, the capacity of the project is a family of 3-4 maximum and their short term guests. Program distribution of the project is quite minimal but there is a route of circulation idea based on a psychological experience in less than 2 meters of distance.

This research is about creating a path to your work and the effects of this route on your mental preparation for working day which defends there is a connection between the environment-shifting and mind-shifting from comfort to discipline mood. This is why, smaller and slidable modul of the GASP Tiny House is a workspace, workshop an it might be used as a tiny sport studio for maximum of 2 users while the main greater modul facing the lake on first construction site in Lake Abant, Turkey is containing Living Area, Dining and Cooking Area, WC Area and storage in the first level while the second level contains only sleeping area and a bathtub with a view.

In the decision phase of the GASP, some of the most important factor architect wants to underline is, joyful vistas in main areas for quality of experience and feeling an anti-gasp vibe, privacy and security conditions which are optimized by the ability of modifications on site by user as shown in the diagrams, entegration of the site into project by opening the shutters as little terraces to enjoy the nature when the weather is in comfort conditions, the vertical alignment of wet spaces and kitchen to create practical solutions to plumbing and isolations.

Due to the higher entrance level by leveling the entrances and openings by foldable and structural shutter elements, project will not be effected by the flood if there is not a very extreme condition, sky-lights, fireplace and thermal isolated wood material aims to create thermal comfort in the modul, in hot regions project’s high base level will create and optimum environment to totally open the project to the nature to create cross ventilation and sky-lights can de-charge the stack effect out or they can be kept closed to use stack effect in the winter in sleeping areas. The opening on the roof’s of each modul looks on diffrent directions in order to create an arrangable modification opportunity for user according to sunlight direction and their working and living schedules.

GASP Tiny House was attended in a private Danish investor’s competition by invitational preliminary phase by sponsors of the project in order to be produced and distributed. At the moment project is in the phase of registration for permissions and site arrangments in four diffrent sites which are located in 1- Ovacık/Çeşme/TURKEY (personal investment) 2-Abant/Bolu/TURKEY (personal investment) 3-Skagen/Denmark (sponsored by client) 4-Raahe/Finland (sponsored by client).

Connect with the Cankat Seyret 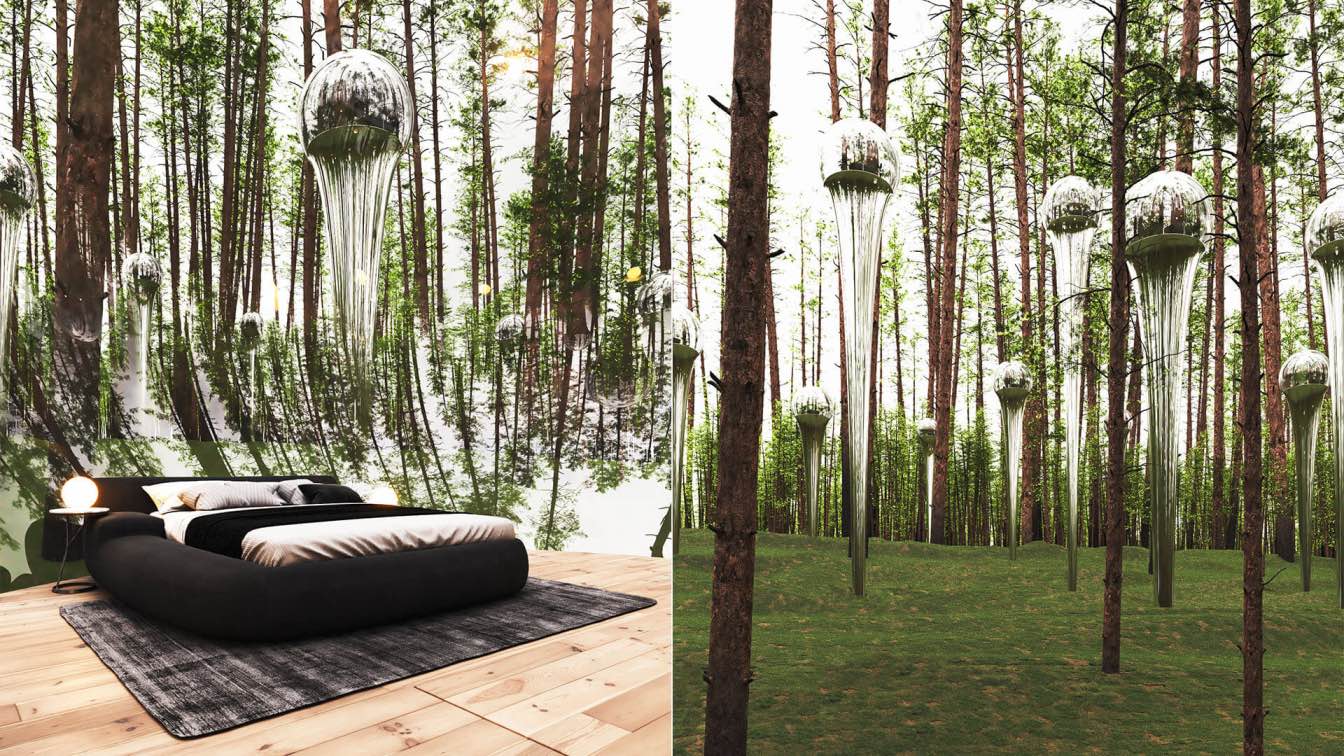 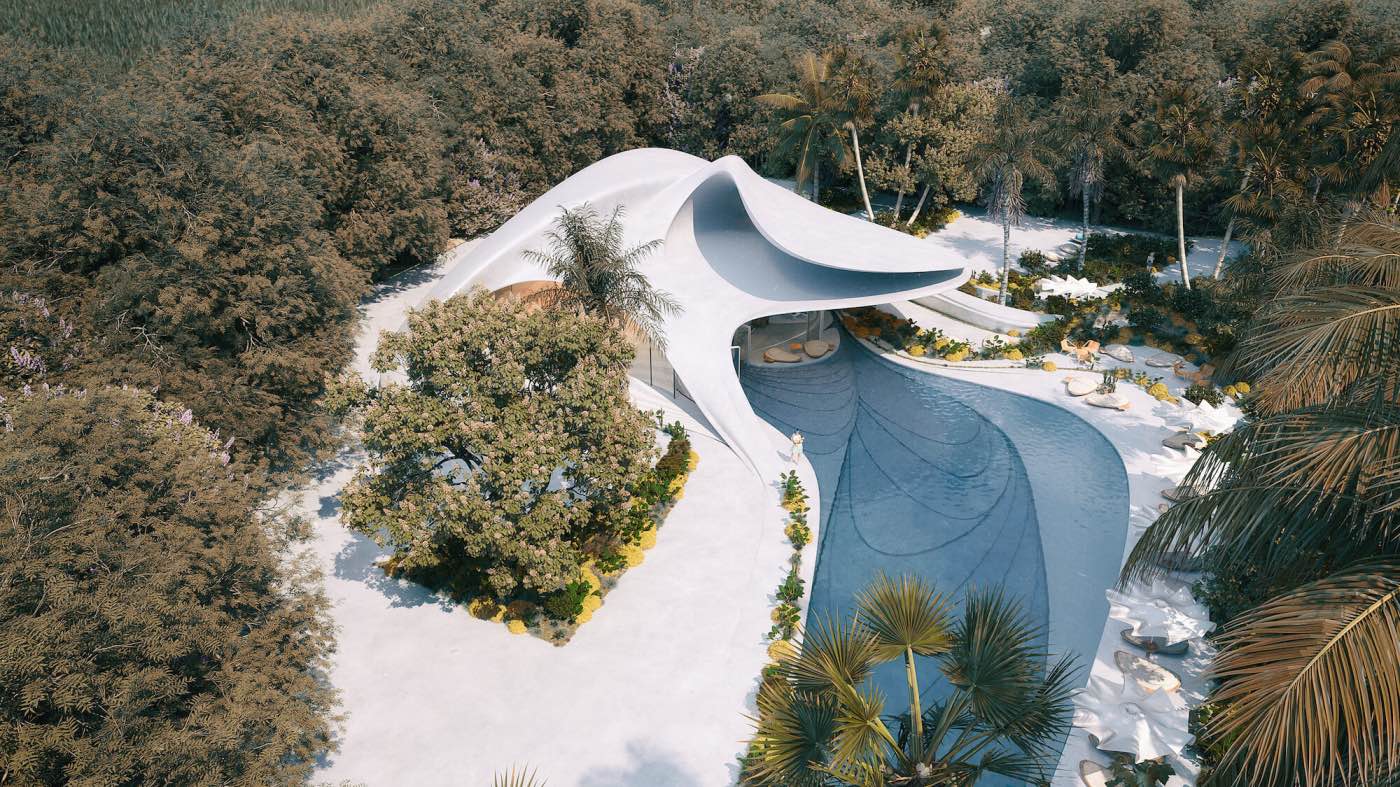 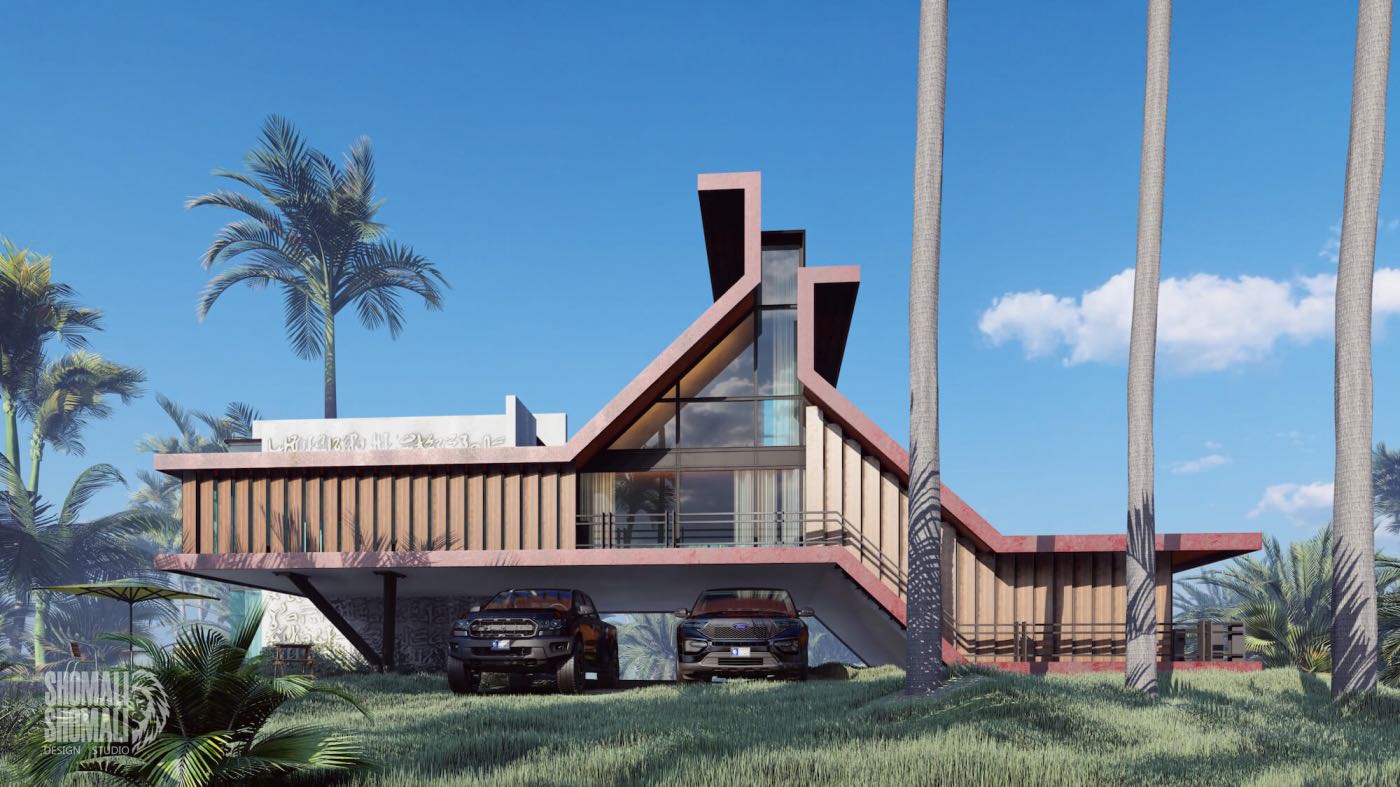 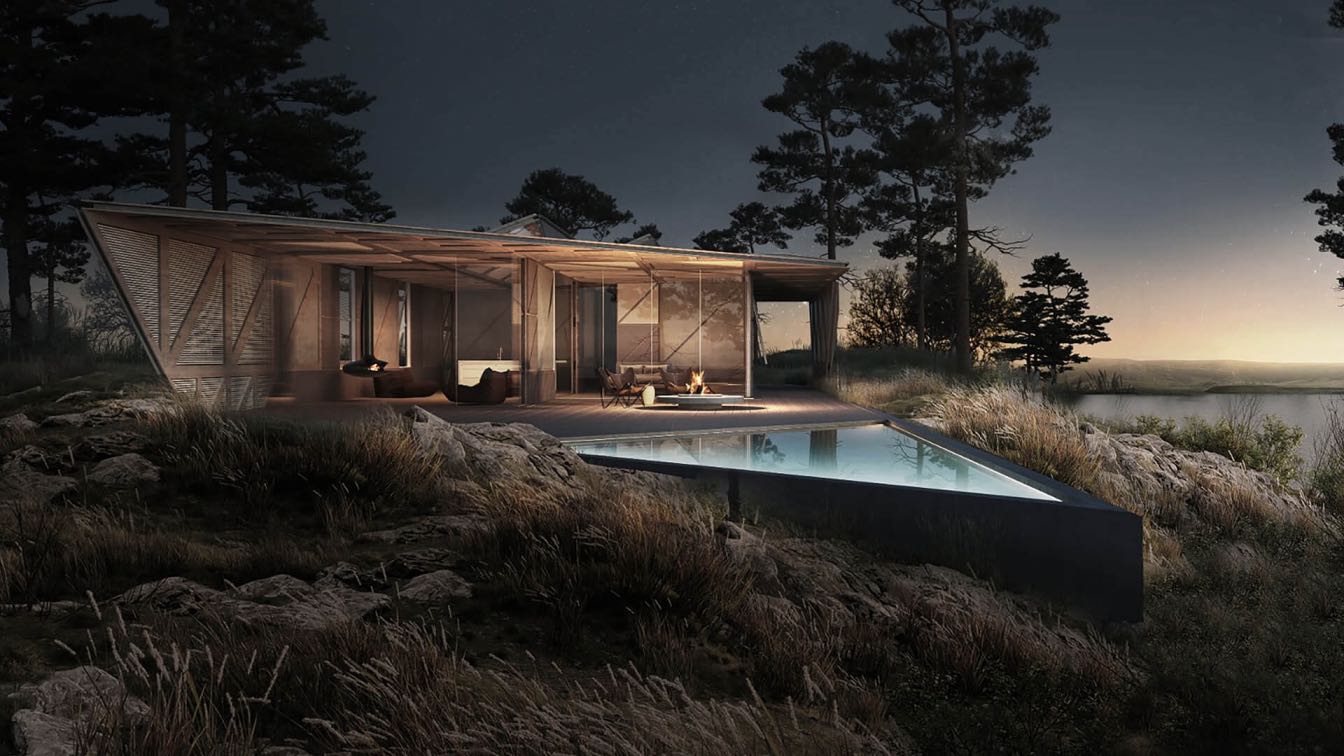