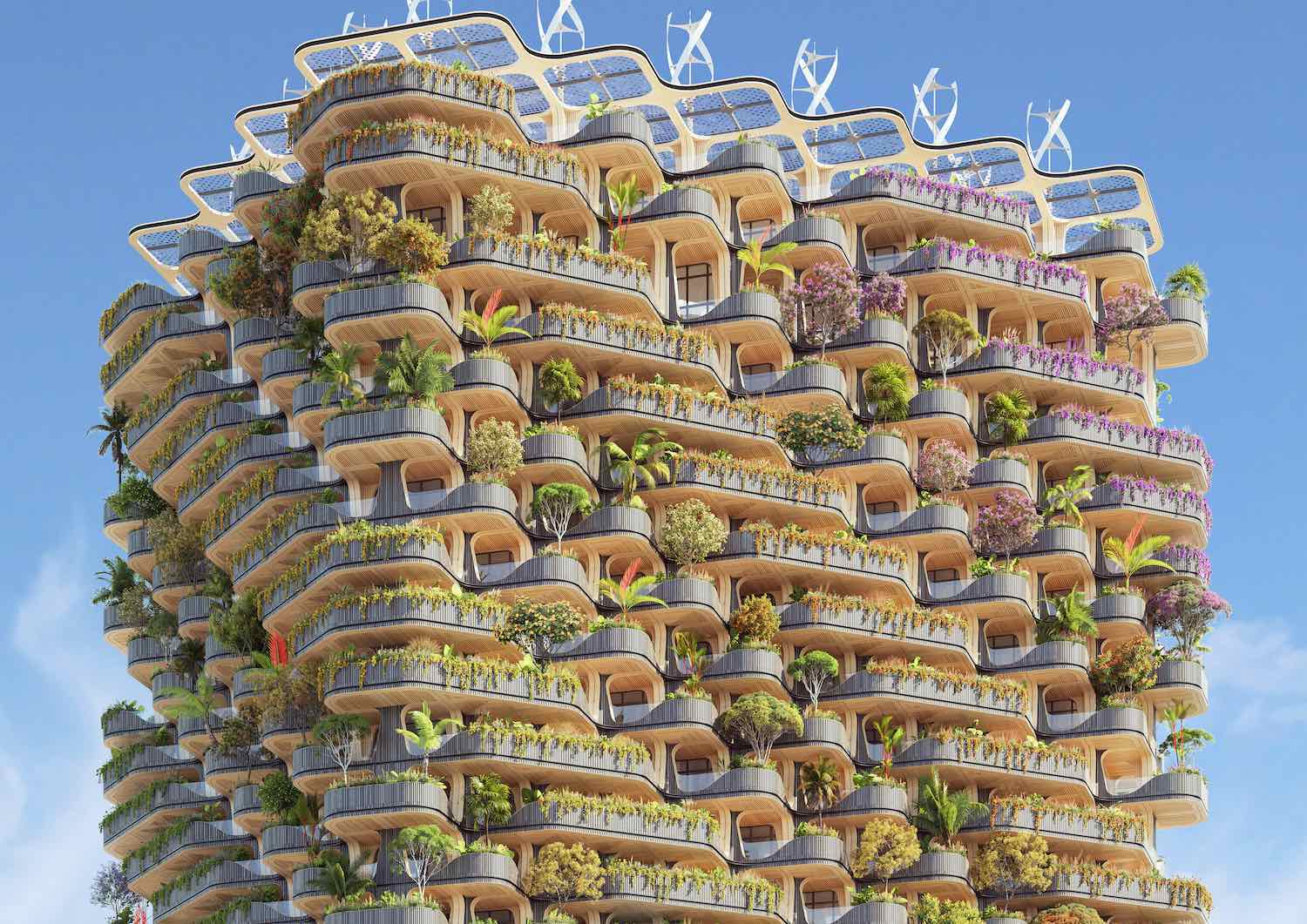 A MULTIPLE ARCHITECTURE REVEALING THE CULTURAL AND NATURAL FILIPINO HERITAGE

In the heart of East Asia, Cebu, in Cebuano Sugbo, is one of the largest islands in the Philippines. The eponymous capital of the Visayas province - Cebu City - is the oldest city in the archipelago. It was the first Spanish colony and was previously discovered by Portuguese explorer Fernando de Magellan in 1521. Cebu City is now the main maritime shipping port and the main economic business center specializing in the New Information and Communication Technologies (NICT) sectors.

On October 31, 2019, the United Nations Educational, Scientific, and Cultural Organization (UNESCO) designated 66 new "Creative Cities". Among them is Cebu, awarded for its innovation in design, particularly in the field of fashion, architecture, and the production of eco-responsible furniture. 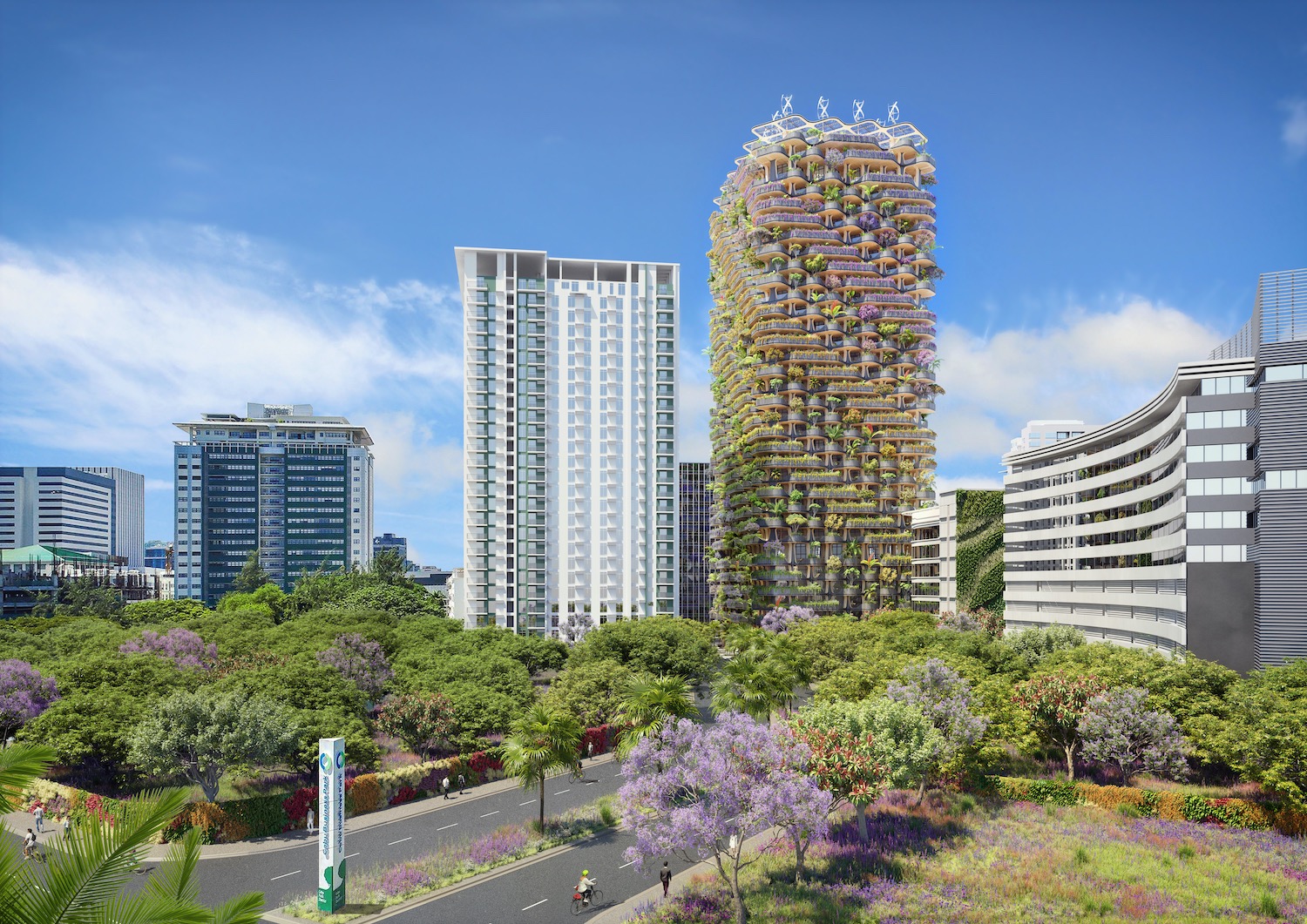 The architecture of the Philippines is both a dynamic combination of multiple influences and a reflection of the country's historical and cultural heritage. This heritage is based on a mixture of Austronesian, Chinese, Malaysian, American (Art Deco), and Spanish (Baroque) influences.

The objective is to construct a residential building with double environmental certification (LEED + BERDE) which offers the perfect balance between mixed cultural heritage and natural heritage of unparalleled splendor. 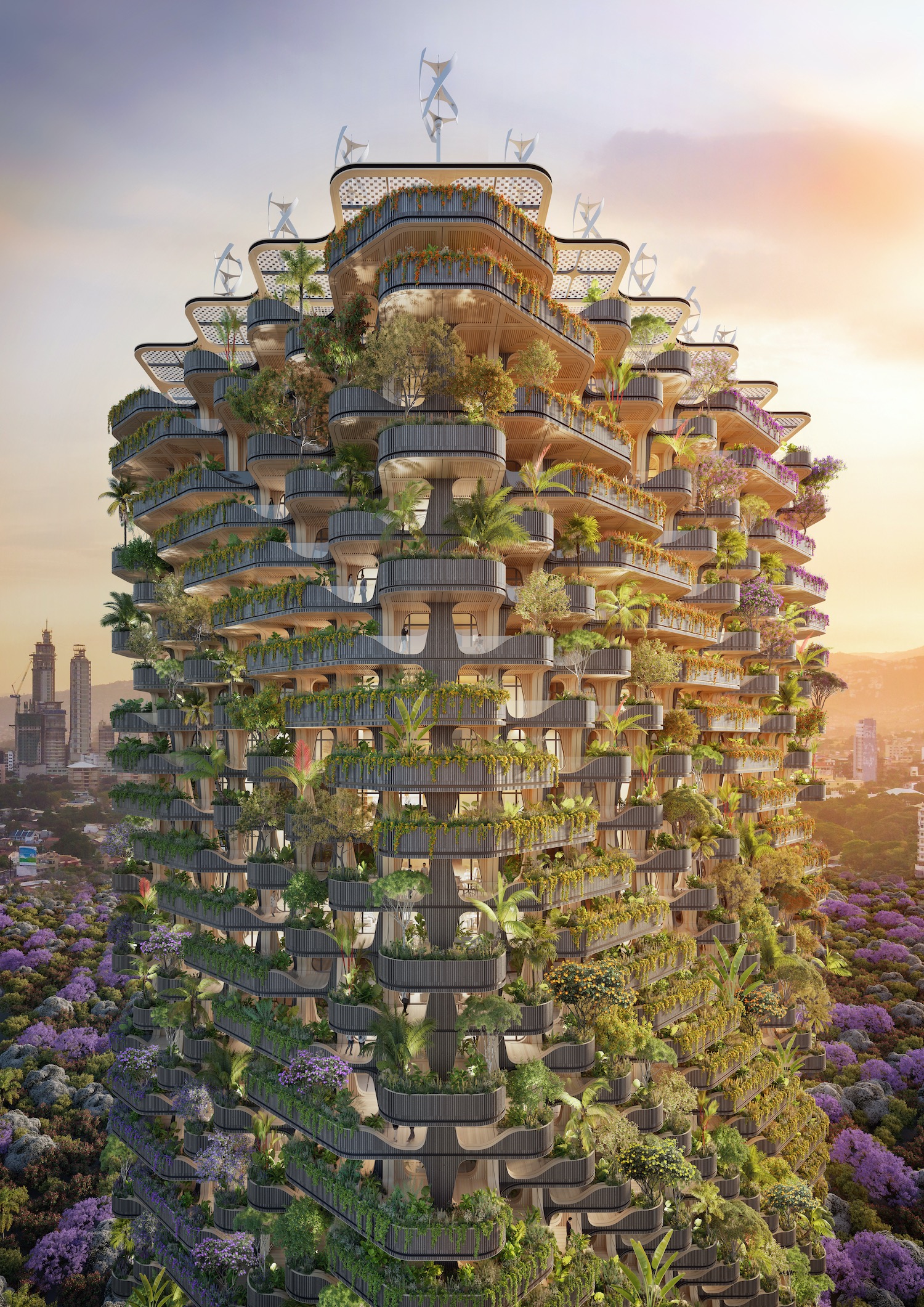 At a time when we need to find radical solutions to reduce the global carbon footprint, we have designed a 32-story, 115-meter high tower built of solid wood, as it is the only natural, abundant, and renewable material. This organic tower integrates the principles of passive bioclimatism and advanced renewable energies. We named it “The Rainbow Tree” because it is an ode to Eucalyptus Deglupta, also known as Rainbow Eucalyptus, an iconic and colorful tree from the Philippines.

This Rainbow Eucalyptus has the particularity of permanently losing its bark which comes off in long and thin strips, thus revealing a trunk that changes color over time. “Degluptere” also means “peel” in Latin. First pale green, then blue, purple, orange, and finally brown, its trunk is a mosaic of colors, giving the appearance of a real rainbow! You would think that it's the result of a painting, but its colors are 100% natural! 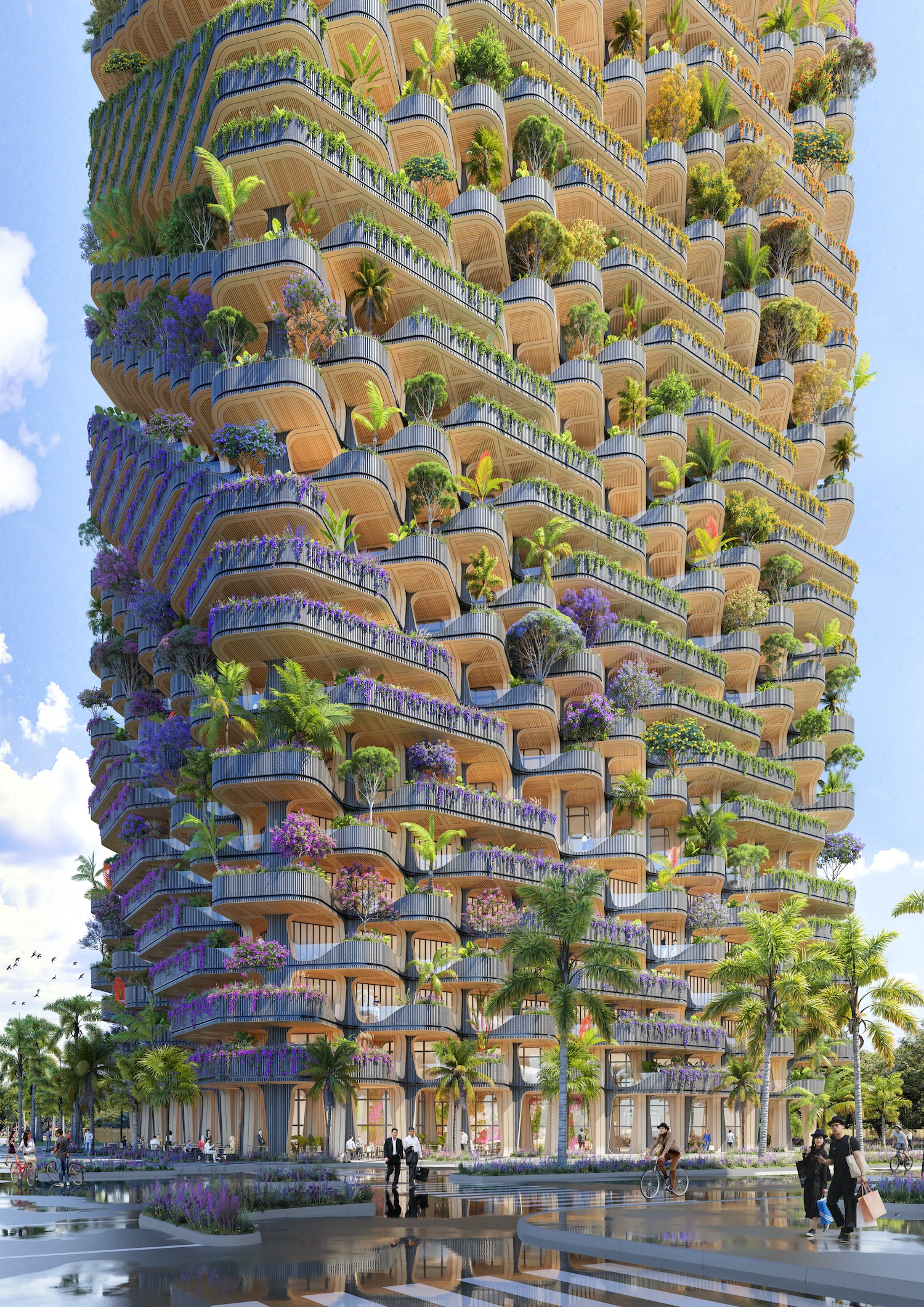 "The Rainbow Tree" tower is adorned with the most beautiful plant essences from the neighboring tropical forests. This luxuriant dress of more than 30,000 plants, shrubs, and tropical trees draws a flourishing spiral in the colors of the rainbow and brings a breath of freshness to the heart of Cebu Business Park which is mainly built of concrete and steel. 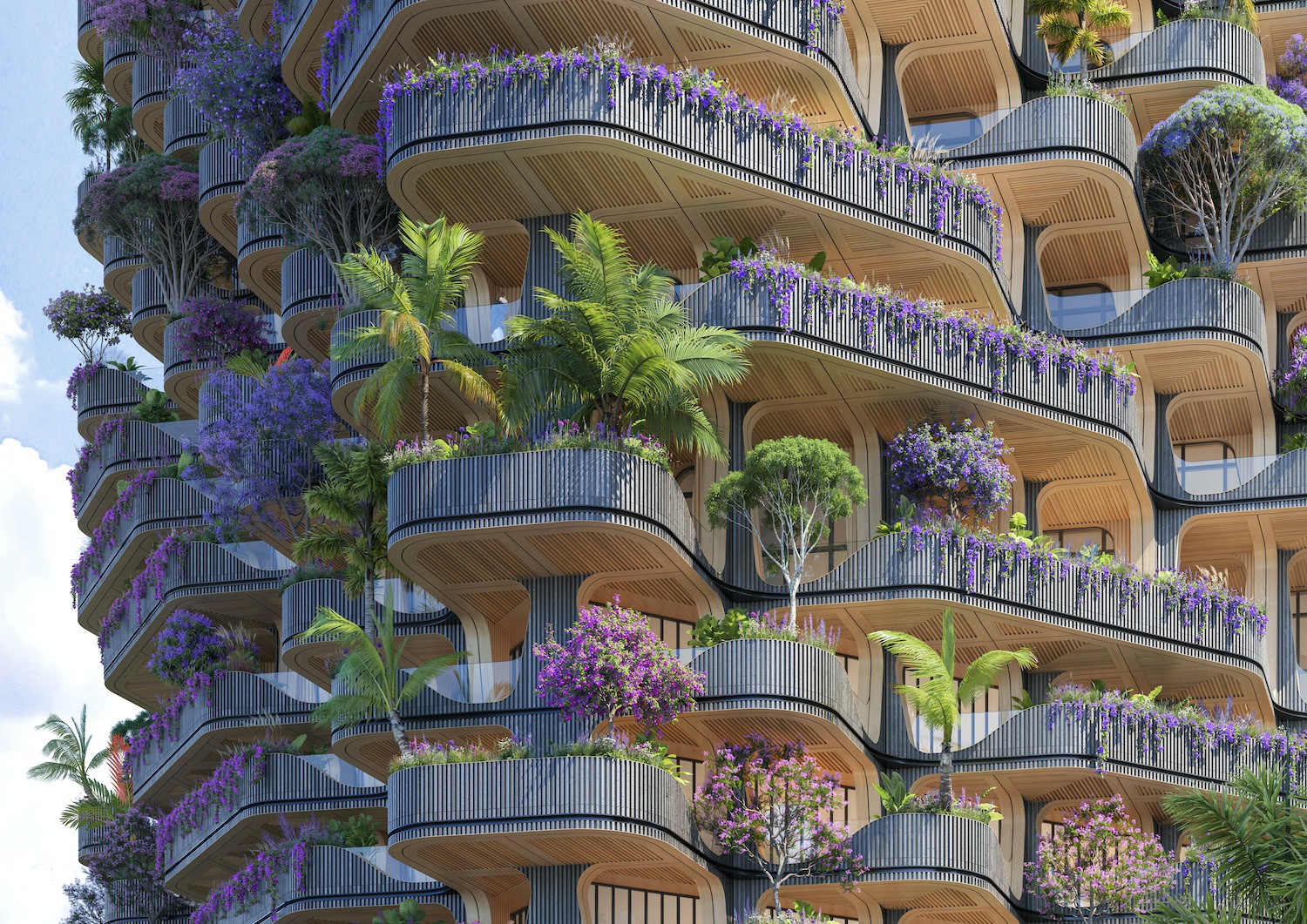 The Rainbow Tree is a staggered geometric stack of 1,200 modules, each with sides measuring 4 meters sides and a height varying between 3.2 to 4.8 meters. All these mass timber modules are prefabricated and standardized in a factory with a very high degree of precision. They are directly inspired by the "Bahay Kubo" (literally, cubic houses, also known as "Nipa Huts").

These indigenous nomadic houses were made of natural materials from the forest such as wood, bamboo, and palm leaves. Before the arrival of the Spanish colonizers with their stone-base constructions, this traditional Filipino rural house originally rested on stilts and was anchored to the trunk of trees near the rice fields, coconut palms, and orchards. 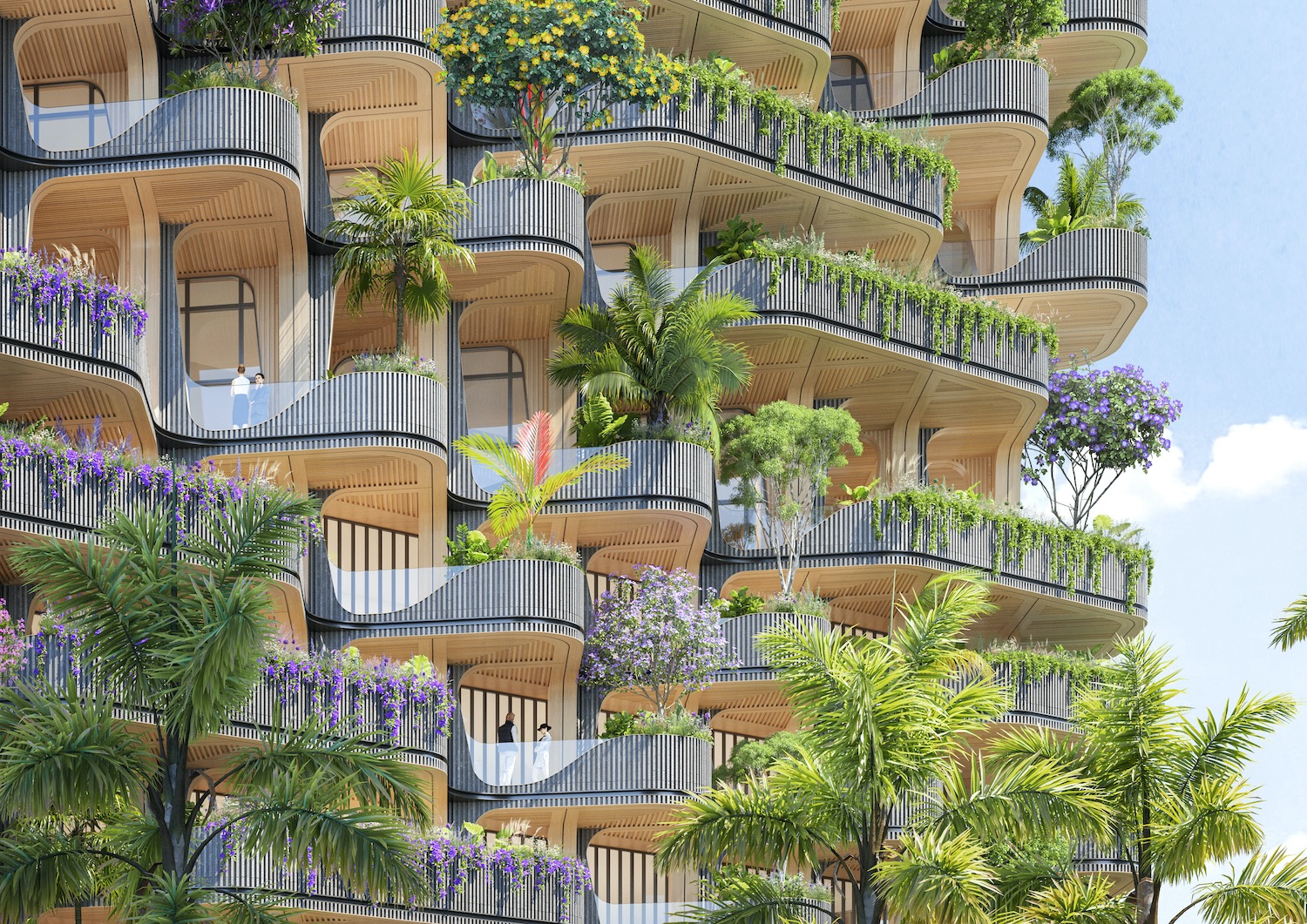 These bio-based "Bahay Kubo" breathe! They are in symbiosis with nature. Their architectural identity reveals that they are based on ventilation, large open interior spaces, and terrace networks adapted to the tropical climate. These three foundations are the basis of our architectural concept for building a CLT (Cross Laminated Timber) tower.

Invented in the 1990s in Austria and Germany, this construction technique consists of superimposing perpendicularly wooden slats and connecting them together using structural, now-organic adhesives such as tannins, lignin, cellulose, or even starch. 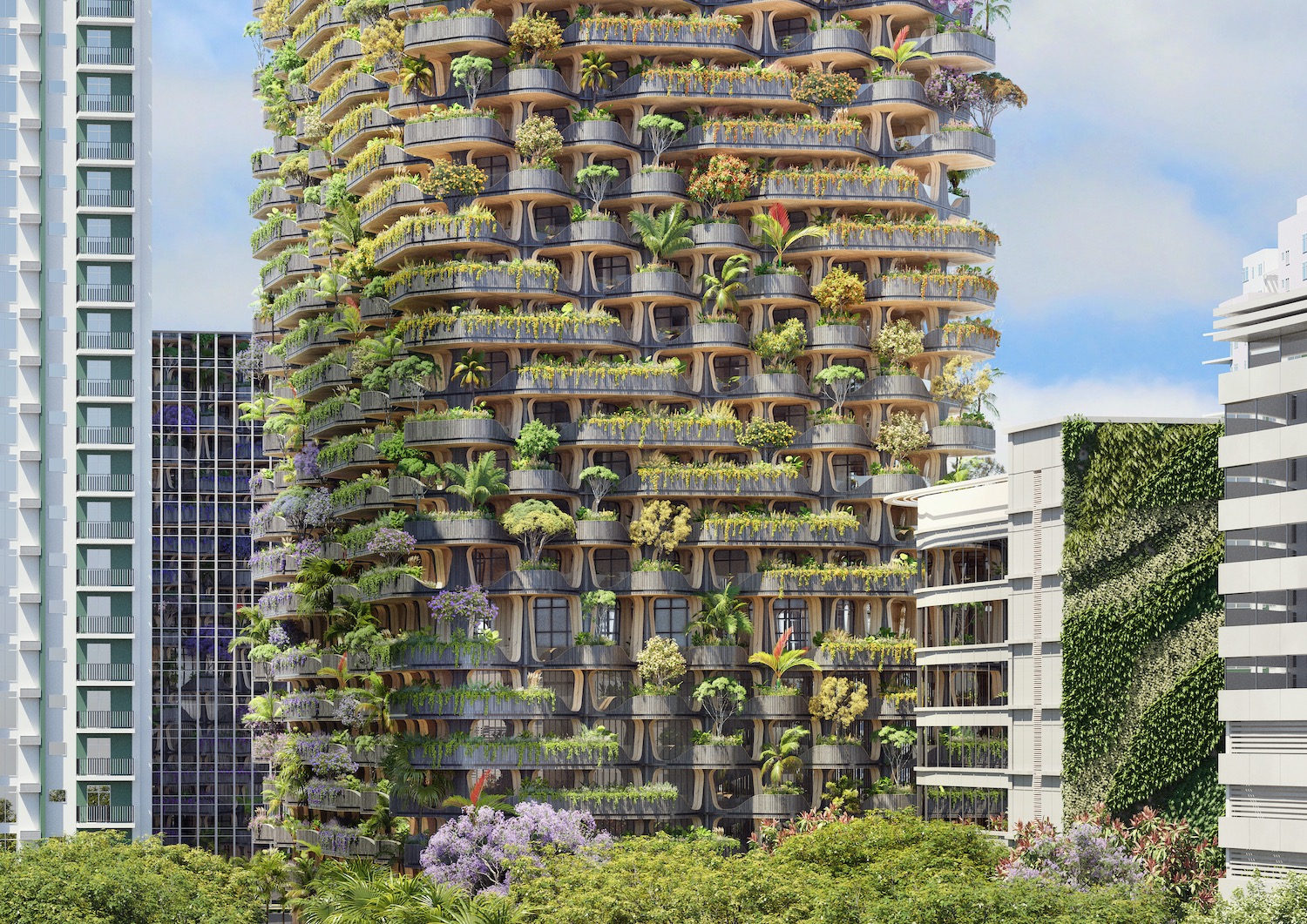 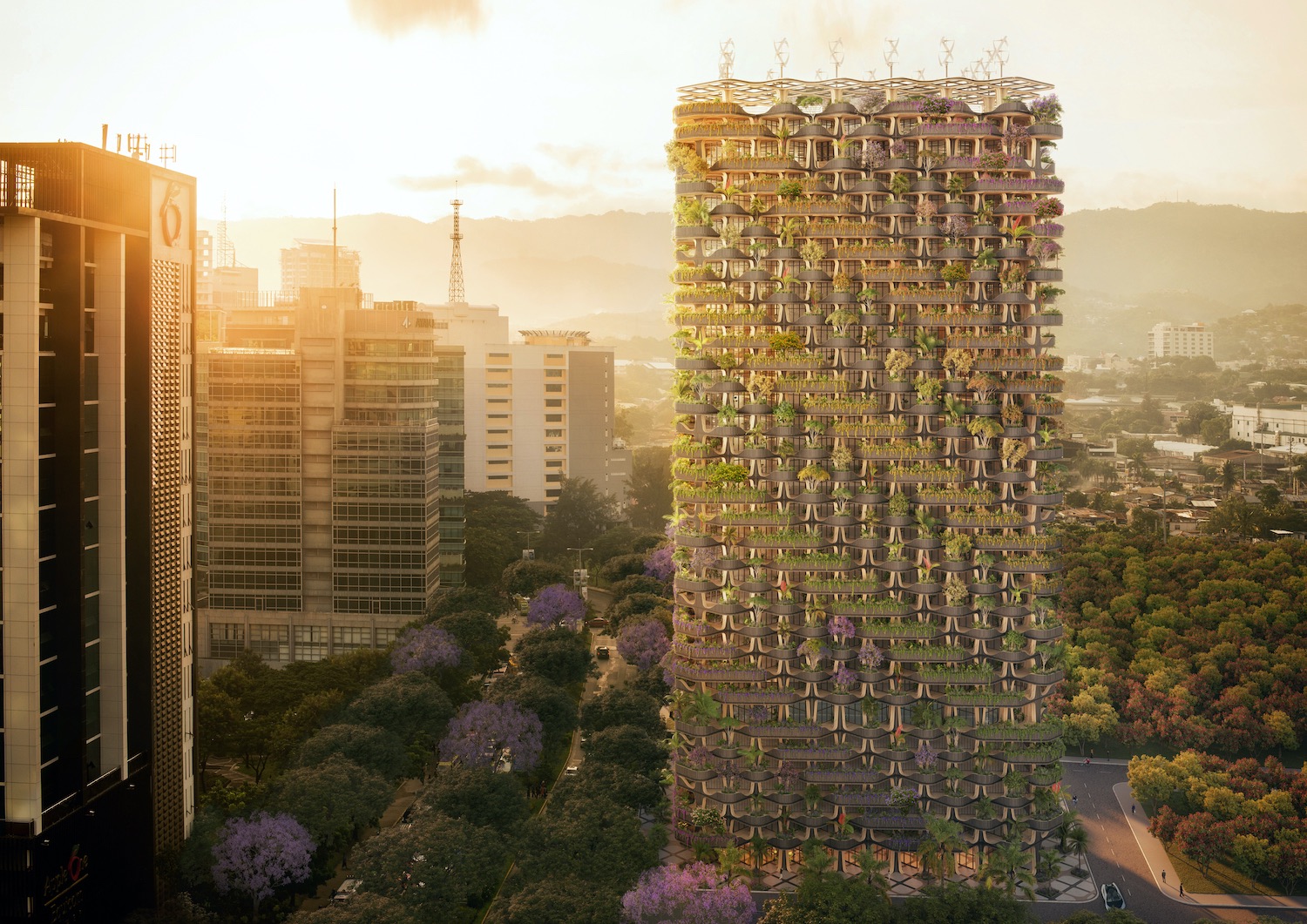 Being built from trees cut and harvested in short circuits in the archipelago in the heart of eco-responsible forests - where a cut tree is equal to a replanted tree - means that the Rainbow Tree is a real carbon sequestration well. In fact, during the growth of trees through natural photosynthesis, the stored carbon is found "trapped" in solid wood and is therefore not released into the atmosphere. For 1 ton of wood produced, about 0.9 tonnes of carbon is confined.

This means we are talking about a building with a negative carbon footprint!

The CLT structure consists of a central core, also made of mass timber, and an "exoskeleton" facade completely freeing the accommodation and amenities of any load-bearing wall, intermediate column, and sheath in the center of the plates.

This design frees up space to allow each resident to personalize their apartment. In the sense of eco-sustainability, being able to transform interior spaces as desired over time is the best guarantee of sustainable development. 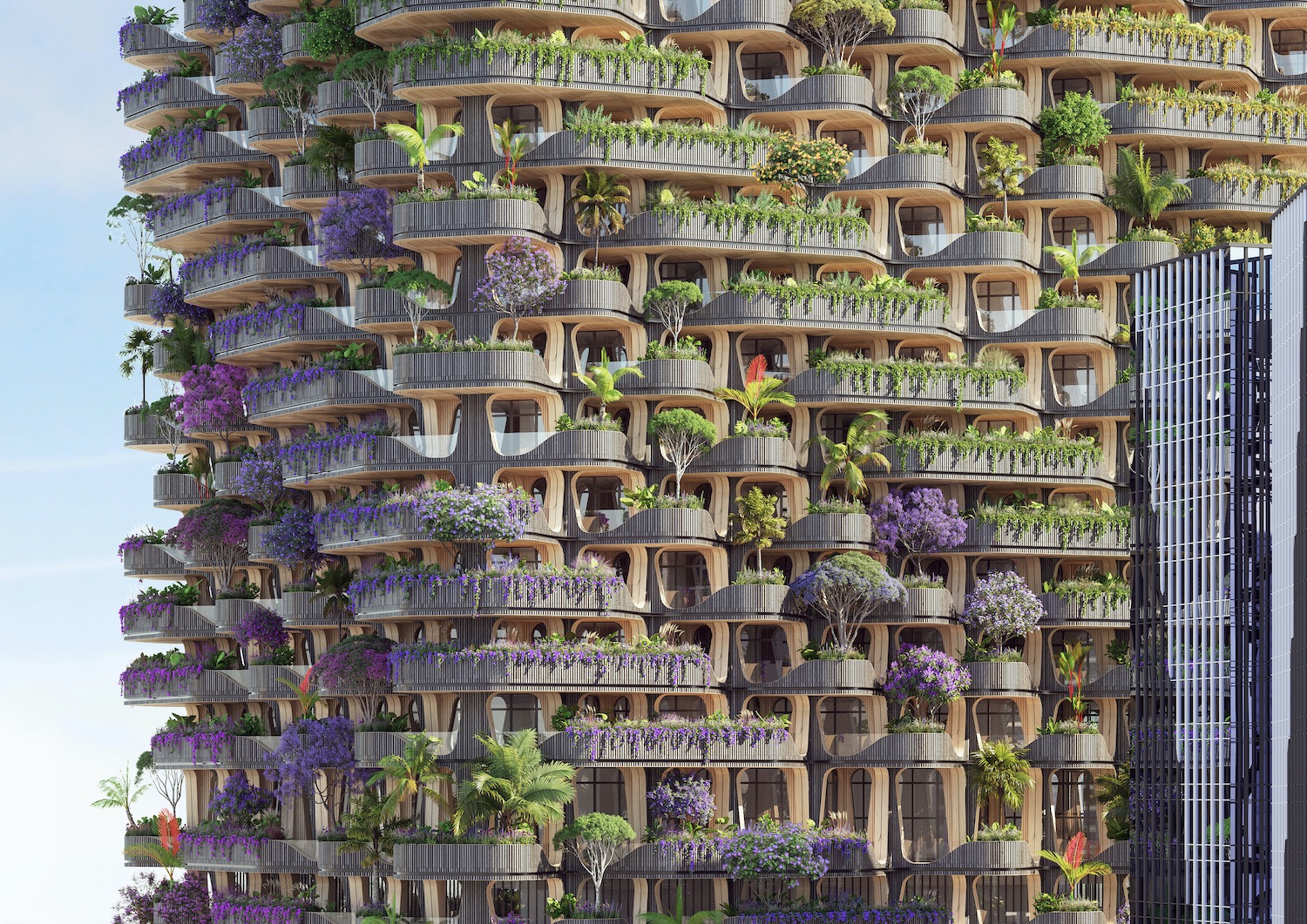 Wooden balconies cover the 115 meter high Rainbow Tree. They are basket-designed with structural consoles in facades allowing the loads of the planters to descend naturally to the trunk of the tower like the branches of a tree.

Programmatically, the Rainbow Tree is subdivided as follows:

- On the first floor: a catering restaurant, a coworking flexible space , the large entrance hall of the accommodation, and the bicycle parking.

- From the 3rd to the 6th floor, 40 parking spaces per level, or 160 spaces in superstructure for electric cars.

- On the 7th floor, the condominium pool and spa.

- On the 8th floor, the mezzanine of the fitness center offering a double height over the swimming pool.

- On the 31st floor, an urban sky farm and its 2 mezzanines aquaponically producing fruits, vegetables, and algae harvested in an extra-short circuit by the inhabitants of the Rainbow Tree.

- On the roof, 1,650 m² of photovoltaic and thermal solar panels 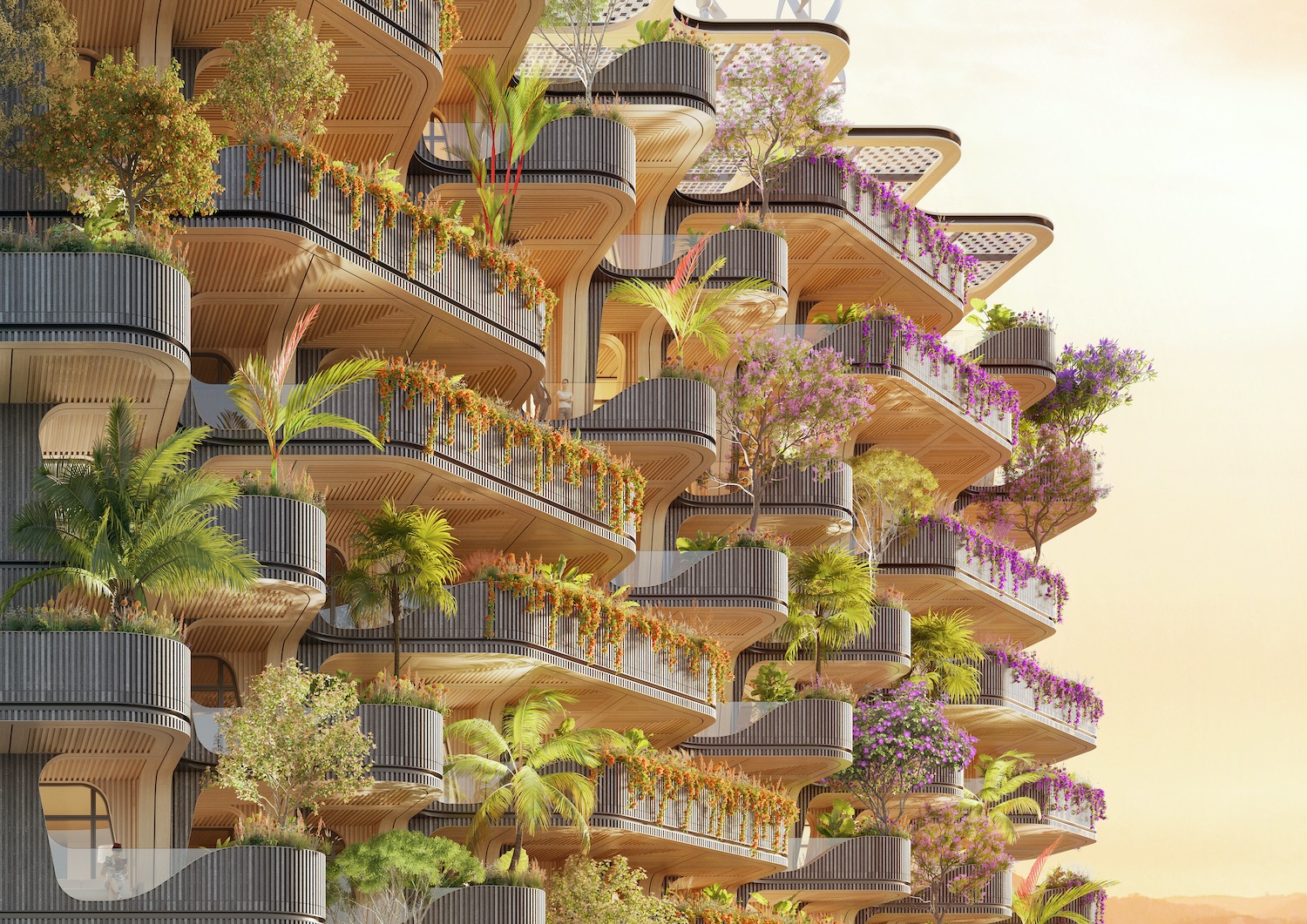 Outside, the blond wood of the CLT gives way to black-silver wood. In fact, the tower is covered with a cladding of cedar planks burnt according to the ancestral Japanese method called Shou-Sugi-Ban. This wood bears the name of Yakisugi (焼 杉 板). Yakisugi is obtained by deeply burning the surface of wooden planks. This material, mainly used for individual houses, is reputed to be more resistant to fire, wood-eating insects, and lignivorous fungi. 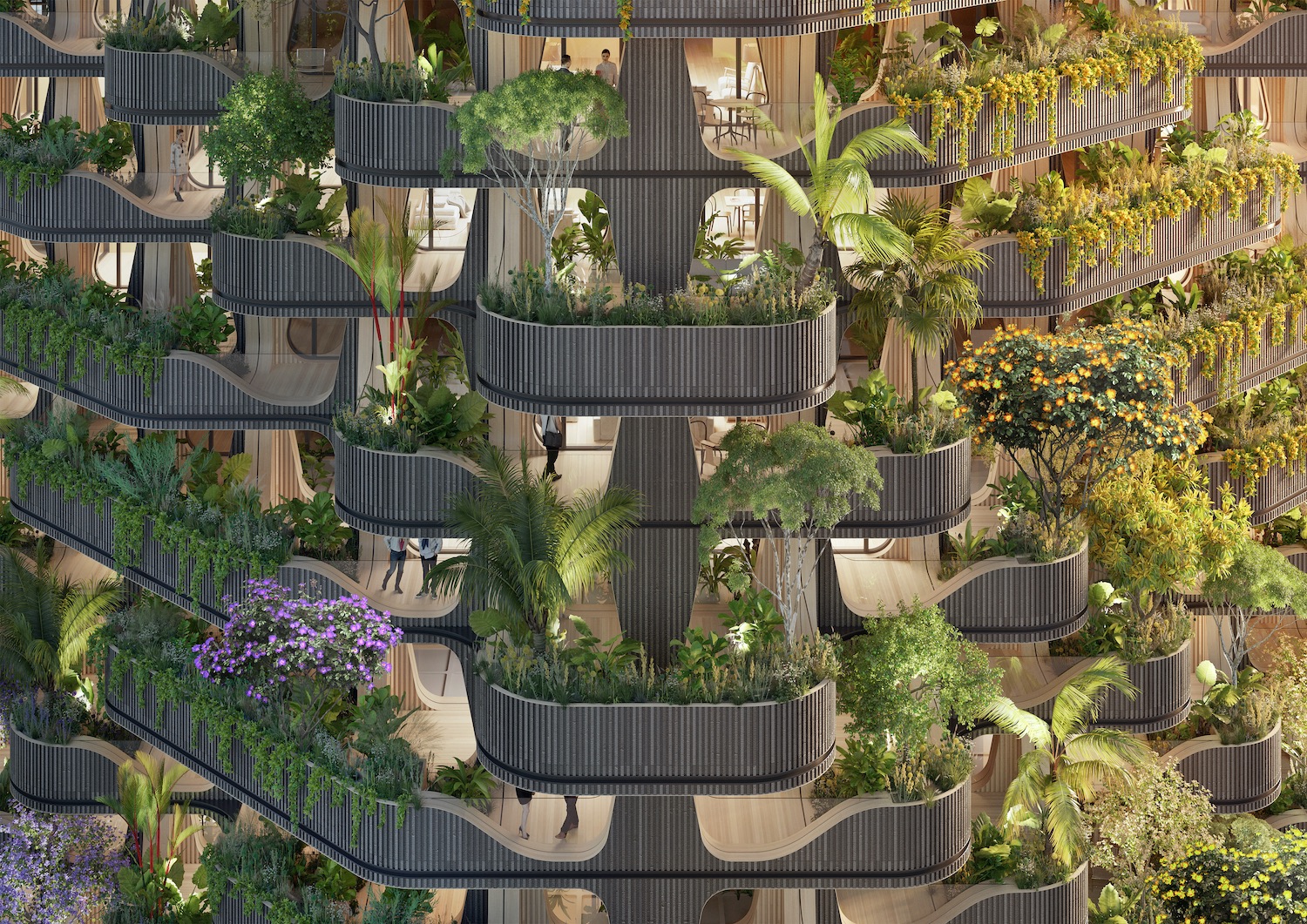 Burning gives the wood a heterogeneous structure without altering its structural capacity. Four layers are distinguished (from the outside to the inside of the facade): carbon, tar, pyrolyzed wood, and solid wood which are not affected by heat. Esthetically, the tower is thus dressed in a scaled dress with a silver patina and bluish reflections. 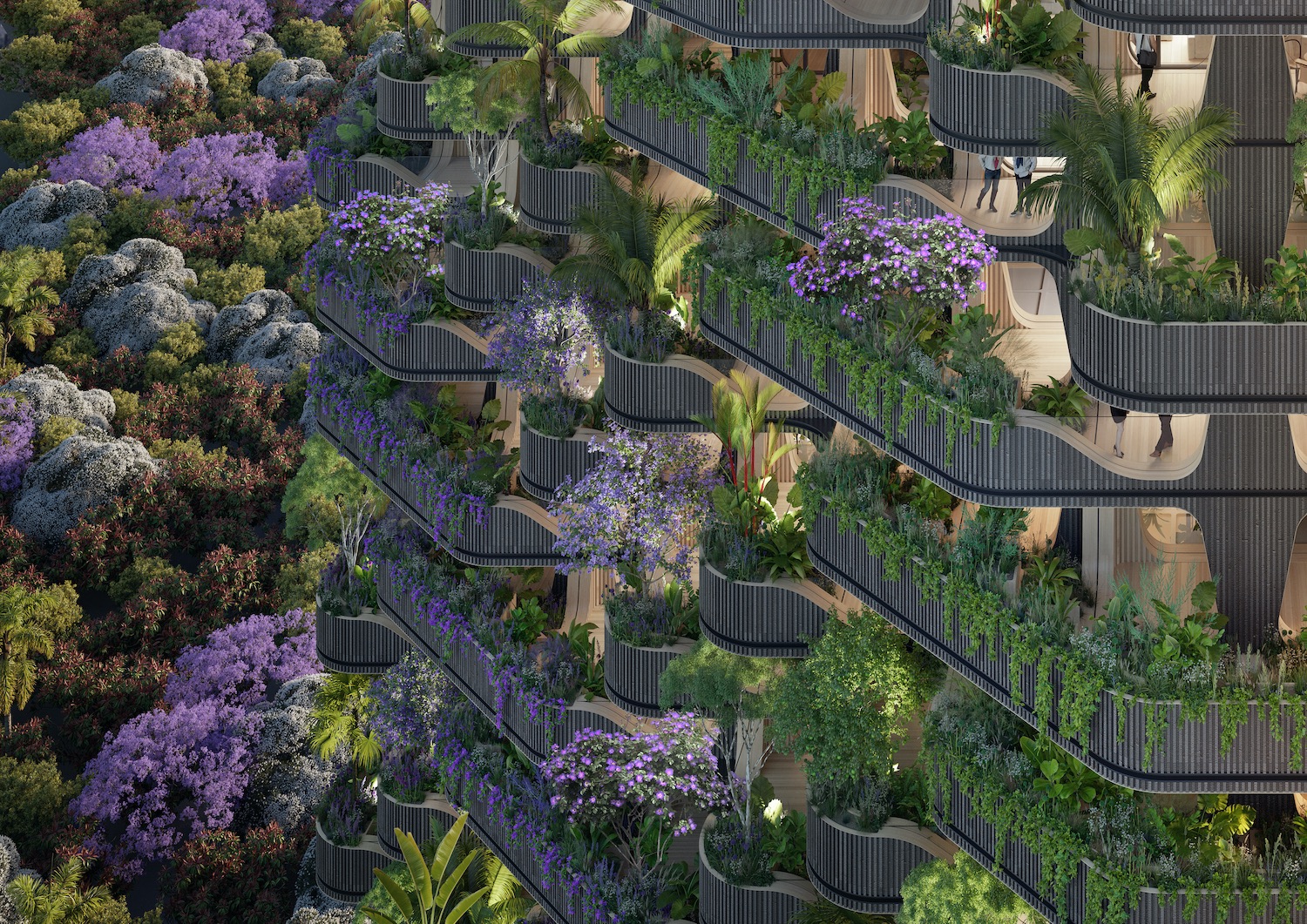 The traditional Yakisugi technique aims for high environmental quality without any use of synthetic chemicals and without the use of any additional energy source, such as gas.

The burnt wood facades are inseparable from the Japanese esthetic of Wabi-Sabi: the fruit of several natural processes - photosynthesis and fire - they age over time, and this change in appearance is positively perceived by people who see it. The spirit of Wabi-Sabi means accepting the imperfect surface of the material that accompanies the life of the residents. 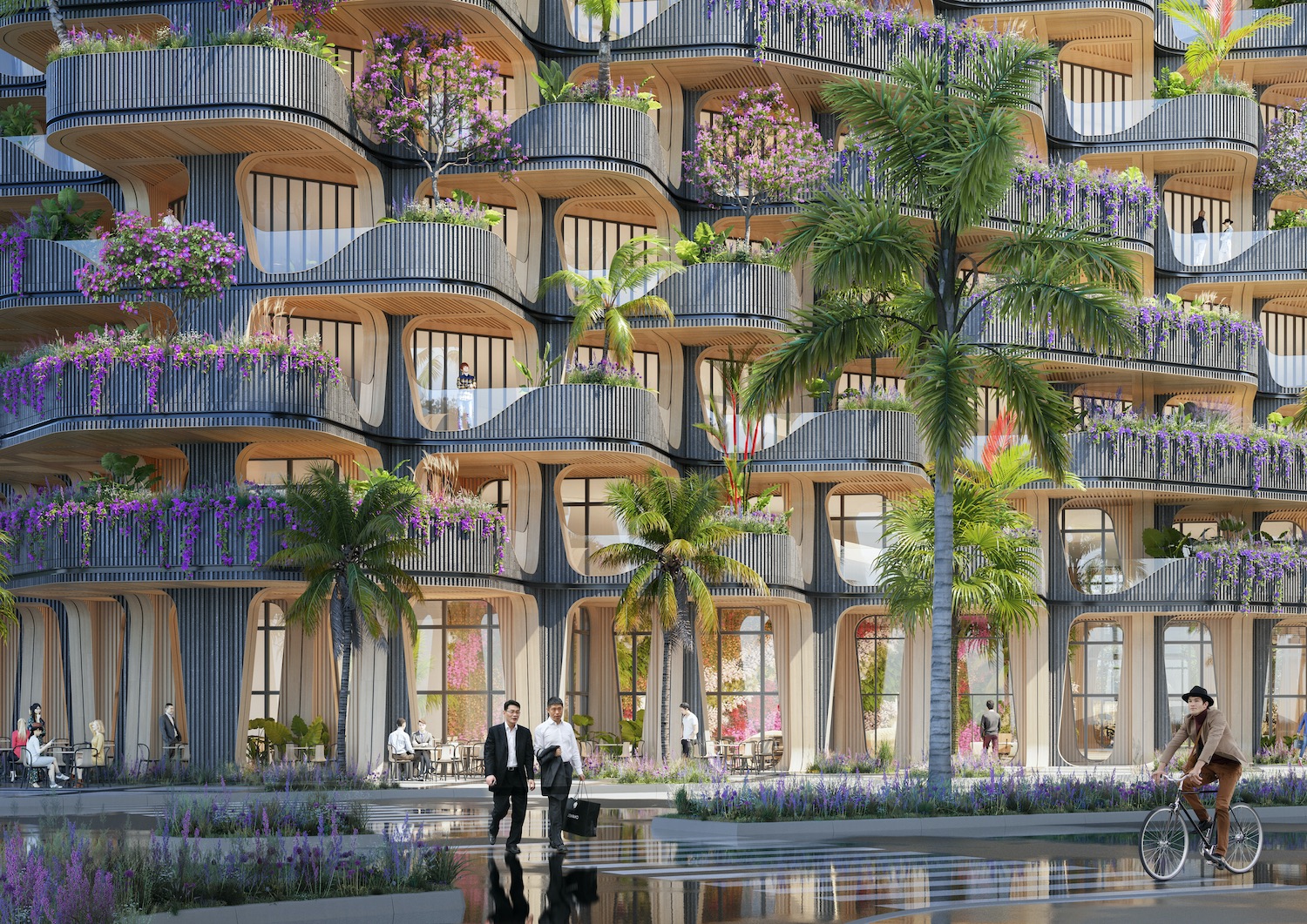 Our leitmotif is therefore to combine functionality and elegance by sublimating natural, simple, and traditional materials. The Rainbow Tree is a contemporary design architecture born from a collective memory with clean curves tinged with a popular dimension, a collective ideal, and an ancestral imagination. It advocates the use and reinterpretation of the indigenous, colonial, and modern architectural and landscape styles that predominate or prevail in the city of Cebu. 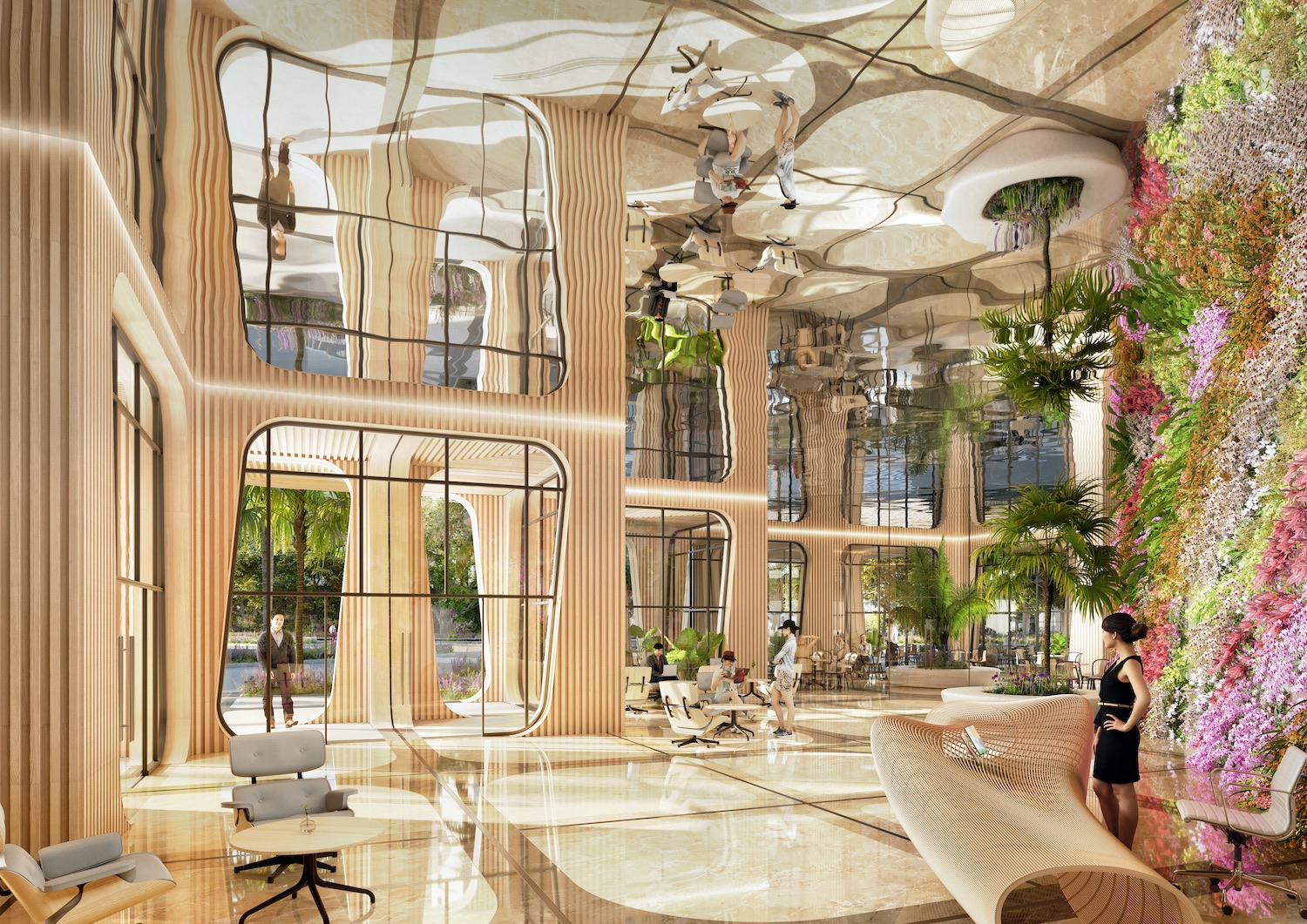 This mountainous island of volcanic origin is covered with tropical forests of extraordinary biodiversity. The tropical-humid climate has an annual average temperature of around 29°C. The Philippines generally has three seasons: Tág-inítor Tág-aráw (the hot season, or summer from March to May), Tág-ulán (the rainy season from June to November), and Tág-lamíg (the cold season) from December to February).

The Rainbow Tree has sinusoidal balconies staggered between the even and odd floors allowing palm trees and deciduous trees to grow on a double height. The endemic plant species are listed according to the color of their flowering - pink, purple, green, yellow, orange, red - to draw 5 plant spirals wrapping around the solid wood facades.

This urban forest makes it possible to fight against the effects of urban heat and constitutes a true island of freshness by the evapotranspiration of plants bioclimatizing naturally the public space. 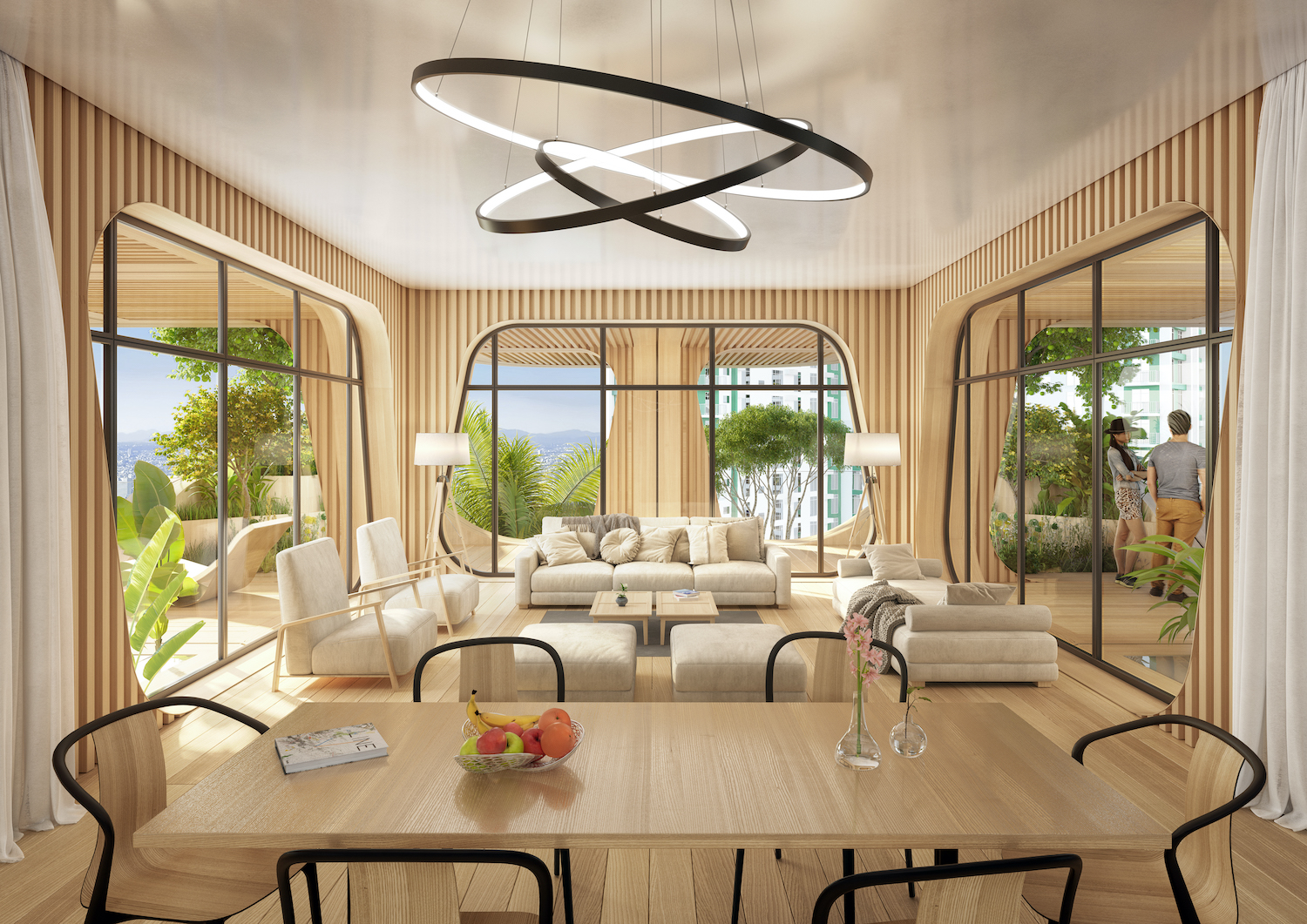 In addition, the 30,000 plants, shrubs, and trees planted on the tower will capture 150 tons of CO2 in the atmosphere of the Cebu City annually to transform them into oxygen through natural photosynthesis. The tower, which is already low in intrinsic carbon thanks to its bio-based construction materials, will also be breathable and depolluting during its operation. 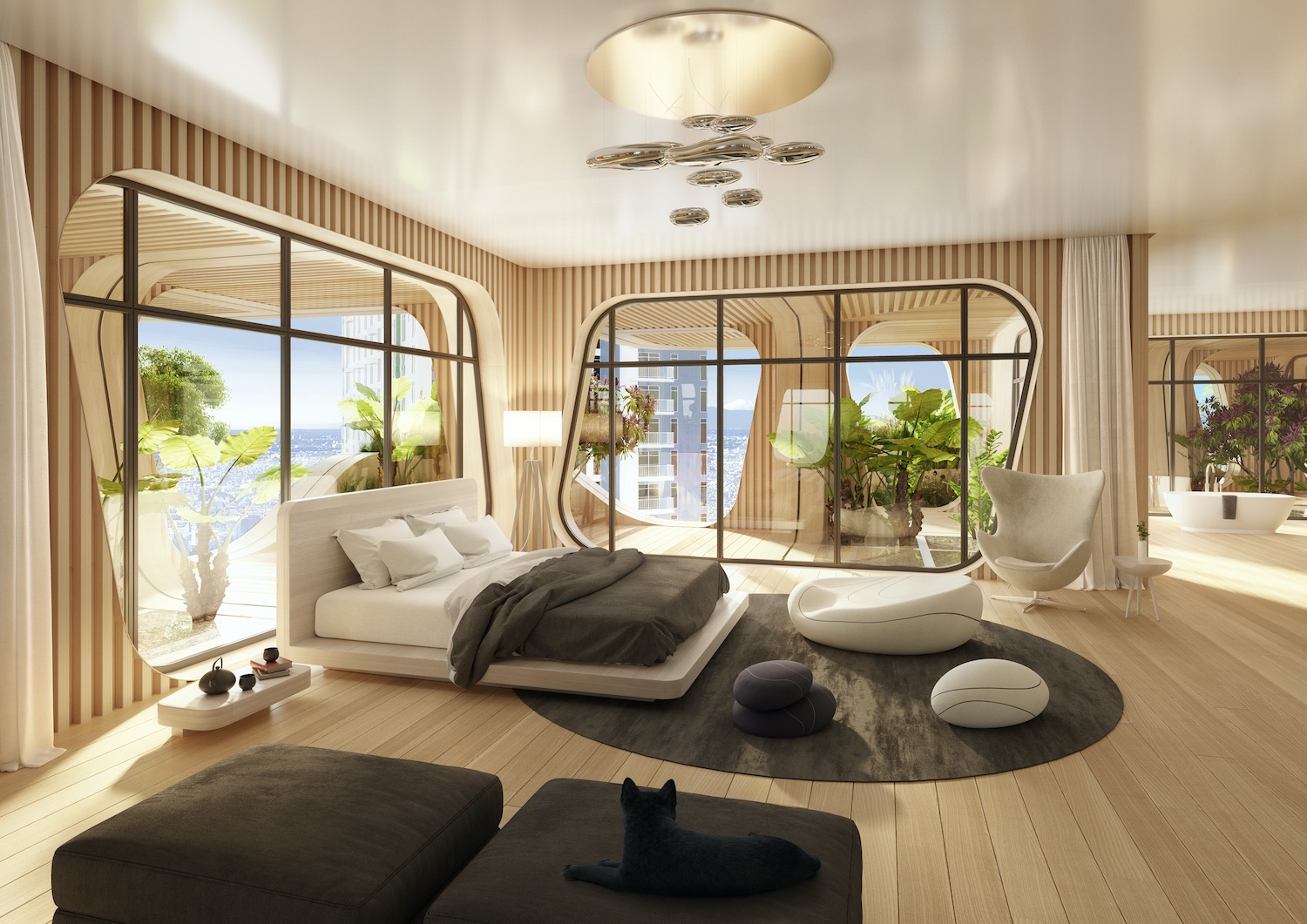 First of all, the tower benefits from double insulation - interior and exterior - and from natural materials such as thatch, hemp, and cellulose wadding. In addition, the plant cover makes it possible to control the solar gains and take advantage of the evapotranspiration of the plants to cool the temperature felt on the balconies by 2 to 5 degrees. 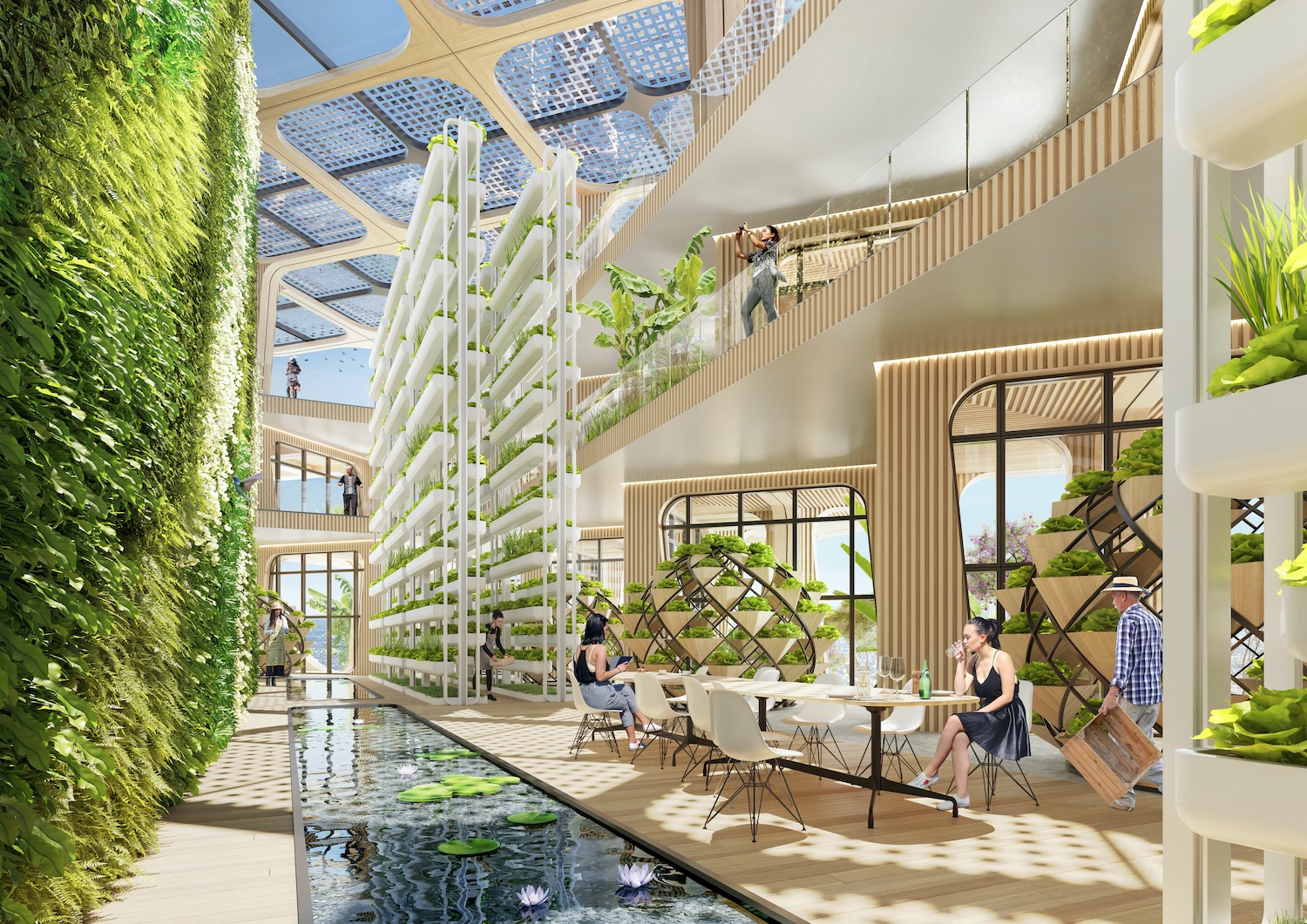 To ensure natural ventilation in each apartment, wind chimneys cross the central core over its entire height. These chimneys draw outdoor air at an average of 29 degrees annually from the urban forest on the ground floor. This hot air passes under the earthquake-resistant foundations where the thermal inertia of the earth is constant all year round at 18 degrees. This naturally refreshed 22-degree air then forced into the apartments as in a termite hill.

In addition to the vegetable tubs planted on the balconies of the apartments, an urban aquaponic farm is spread over the last three levels of the Rainbow Tree. Aquaponics is a technique of sustainable and virtuous agriculture that combines fish farming and plant cultivation and allows you to experience the countryside in the city by removing social ties. 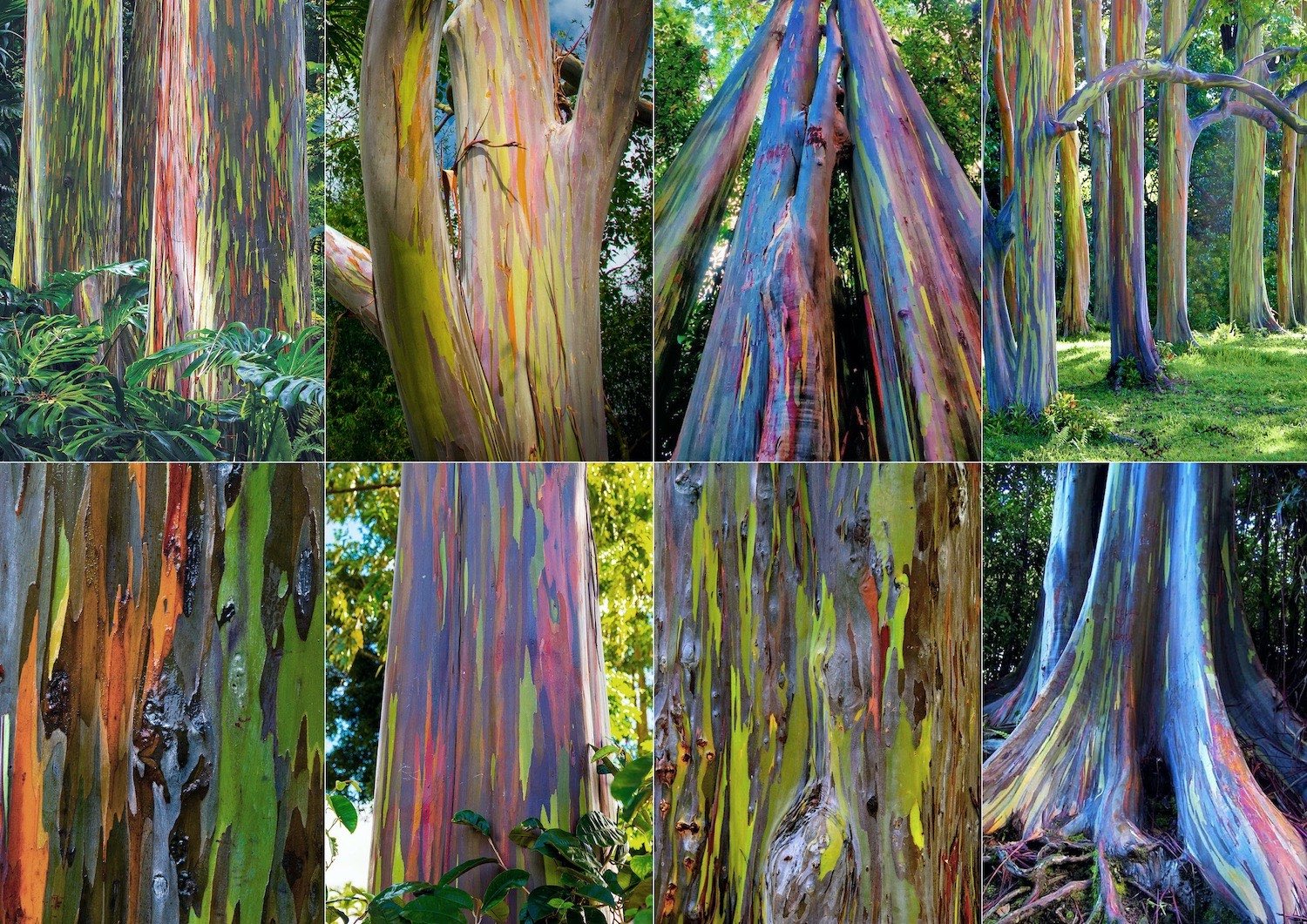 The Sky Farm produces 25,000 kilos of fruit, vegetables, and algae and 2,500 kilos of fish per year, or almost 2 kilos of food per week for each family residing in the tower.

These foods are grown with a water saving of 90%, without chemical fertilizers, pesticides, or GMOs, but from natural fertilizers. In fact, fish excrement nourishes the plants with nitrates. This absorption then filters the water. The purified water finally returns to the fish pond: the cycle can start again. It is nothing less than a recreated natural mini-ecosystem, where the waste of one element becomes the food of another element. A “living market” will allow Cebuanos residents to not only buy farm products but also to eat them on the spot in a cozy atmosphere.

The greenhouse, which is naturally lit all year round, benefits from a low-consumption LED light complement which reproduces the light spectrum of the sun in order to recreate the ideal conditions for photosynthesis.

This urban farm is covered with a solar canopy producing electricity stored in hydrogen fuel cells and domestic hot water redistributed in a virtuous loop in the bathrooms and kitchens of the apartments.

To top it all off, a farm of 16 axial wind turbines with magnetic levitation also generates electricity in situ without any noise pollution.

By 2050, 80% of the world's population will live in cities. It is now necessary to produce as close as possible to the consumer-actors and consume the minimum of resources while reducing wastes and greenhouse gas emissions. Within the framework of the new circular economy, the Rainbow Tree is a prototype of a completely biobased vertical forest respecting the four pillars of the ecological city of the future, namely: energy self-sufficiency (heating, cooling, and electricity); greening of buildings and development of urban agriculture; soft mobility centered on pedestrians, bikes and electric co-mobility; social innovation through spaces for sharing between residents and solidarity services. 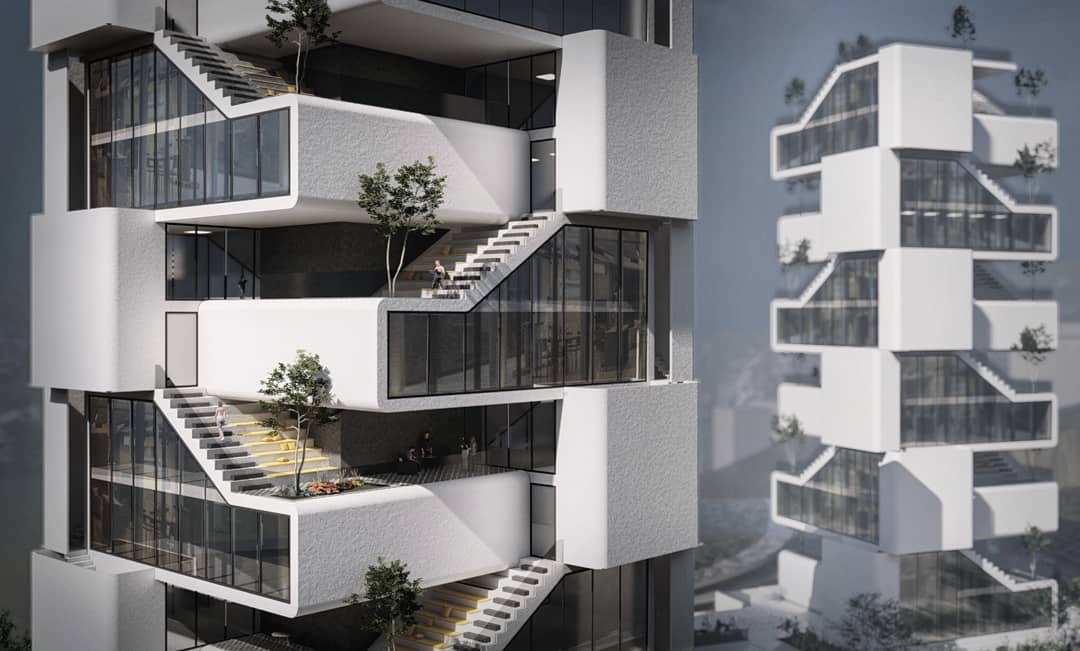 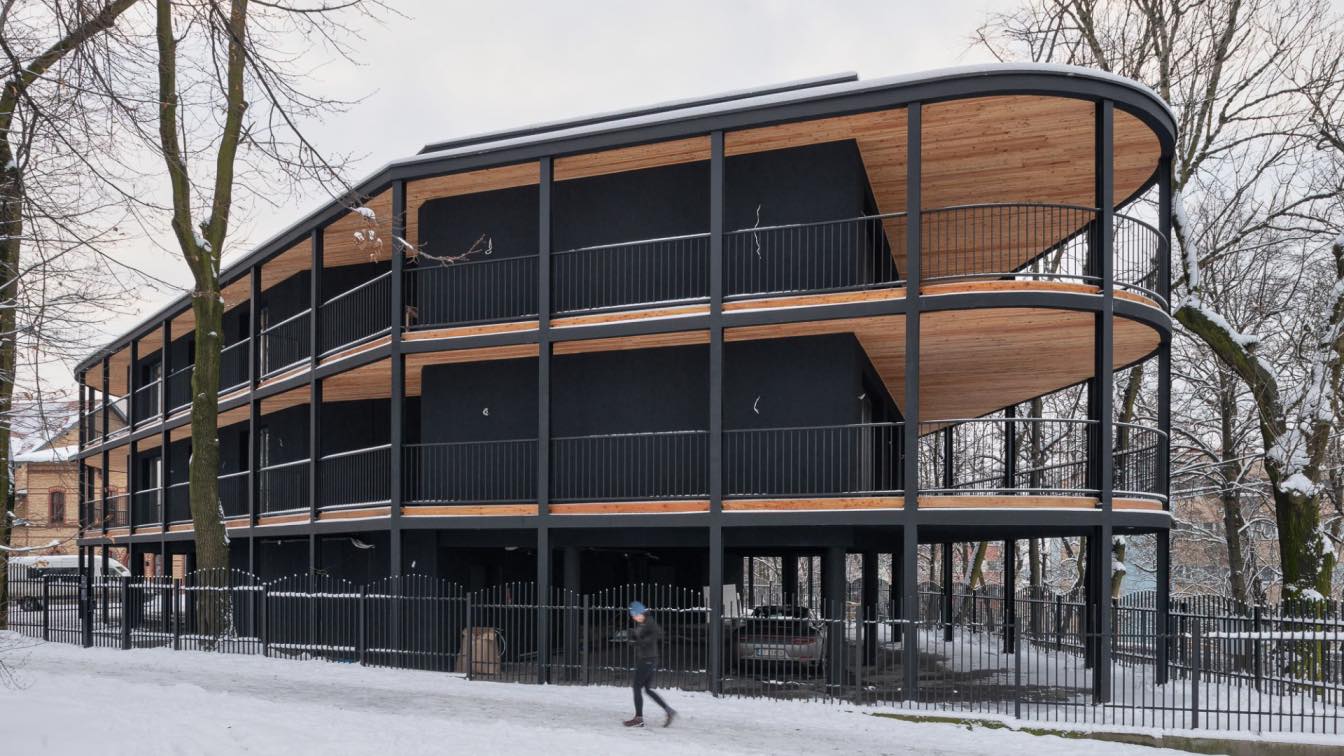 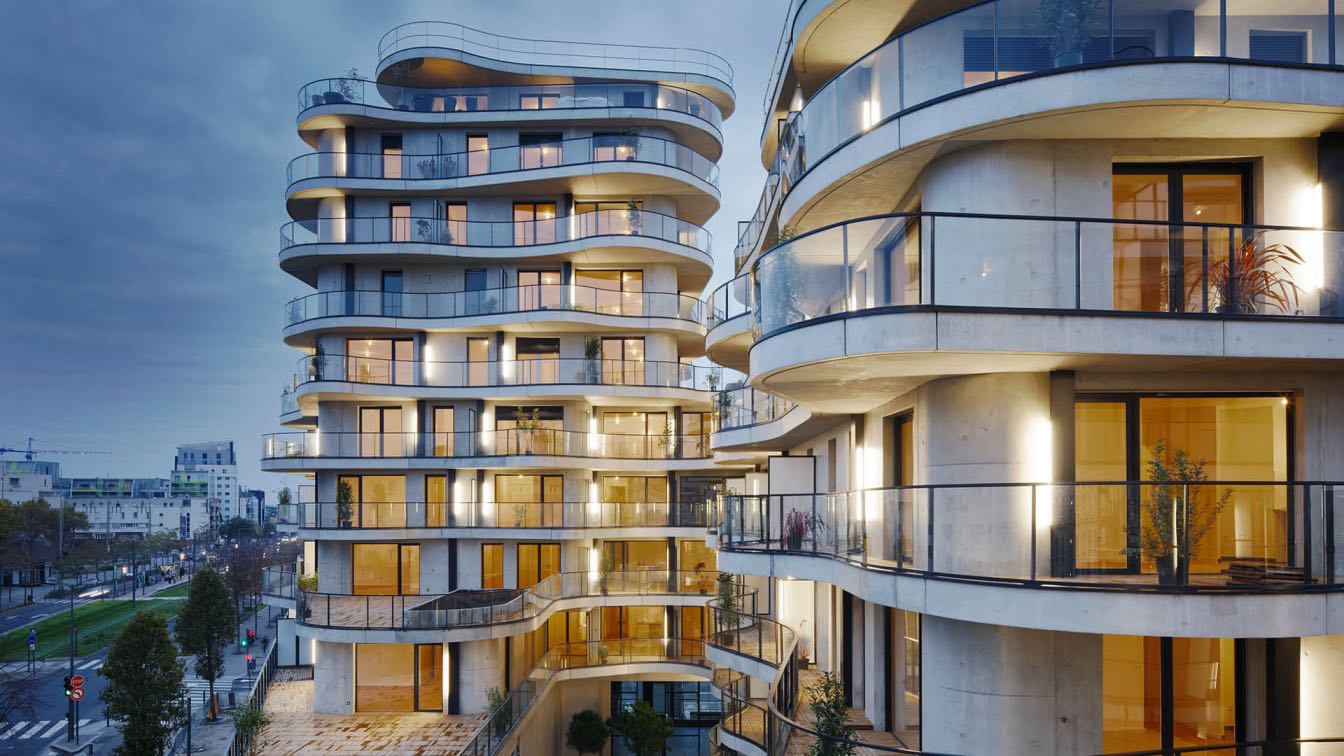 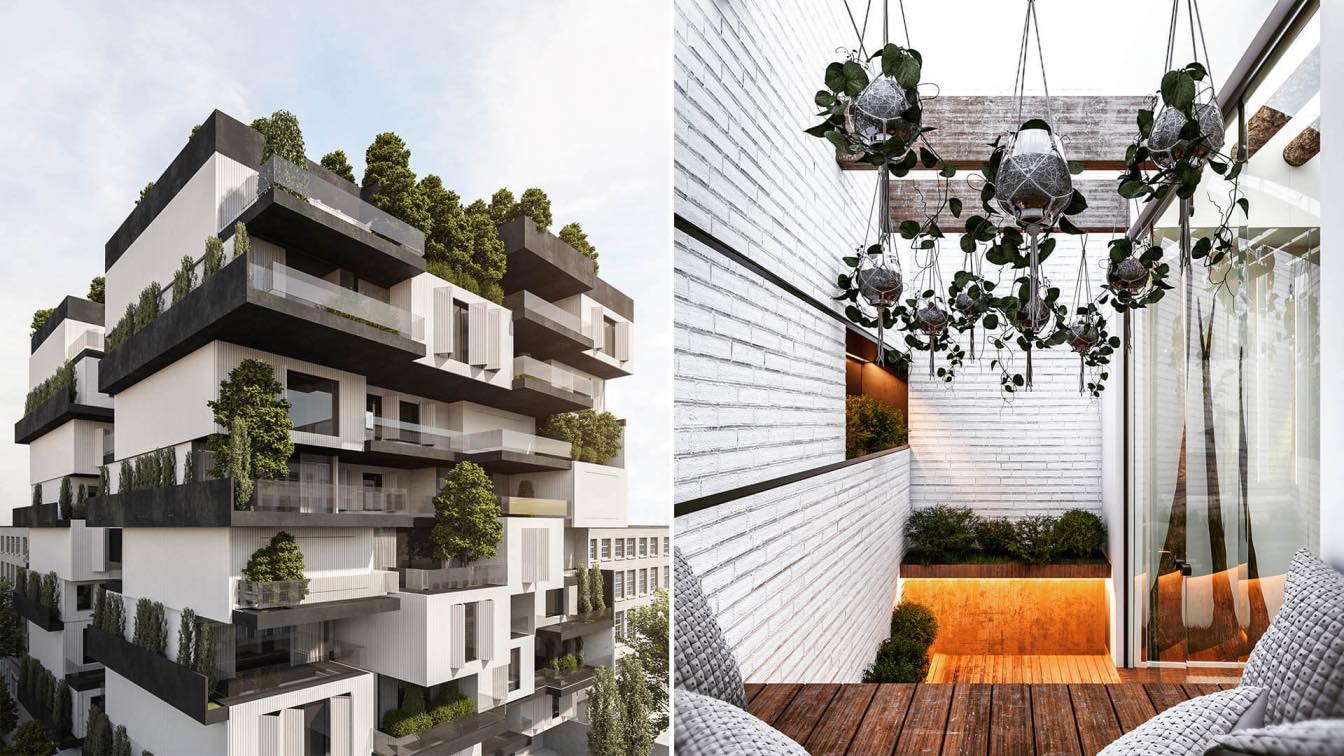