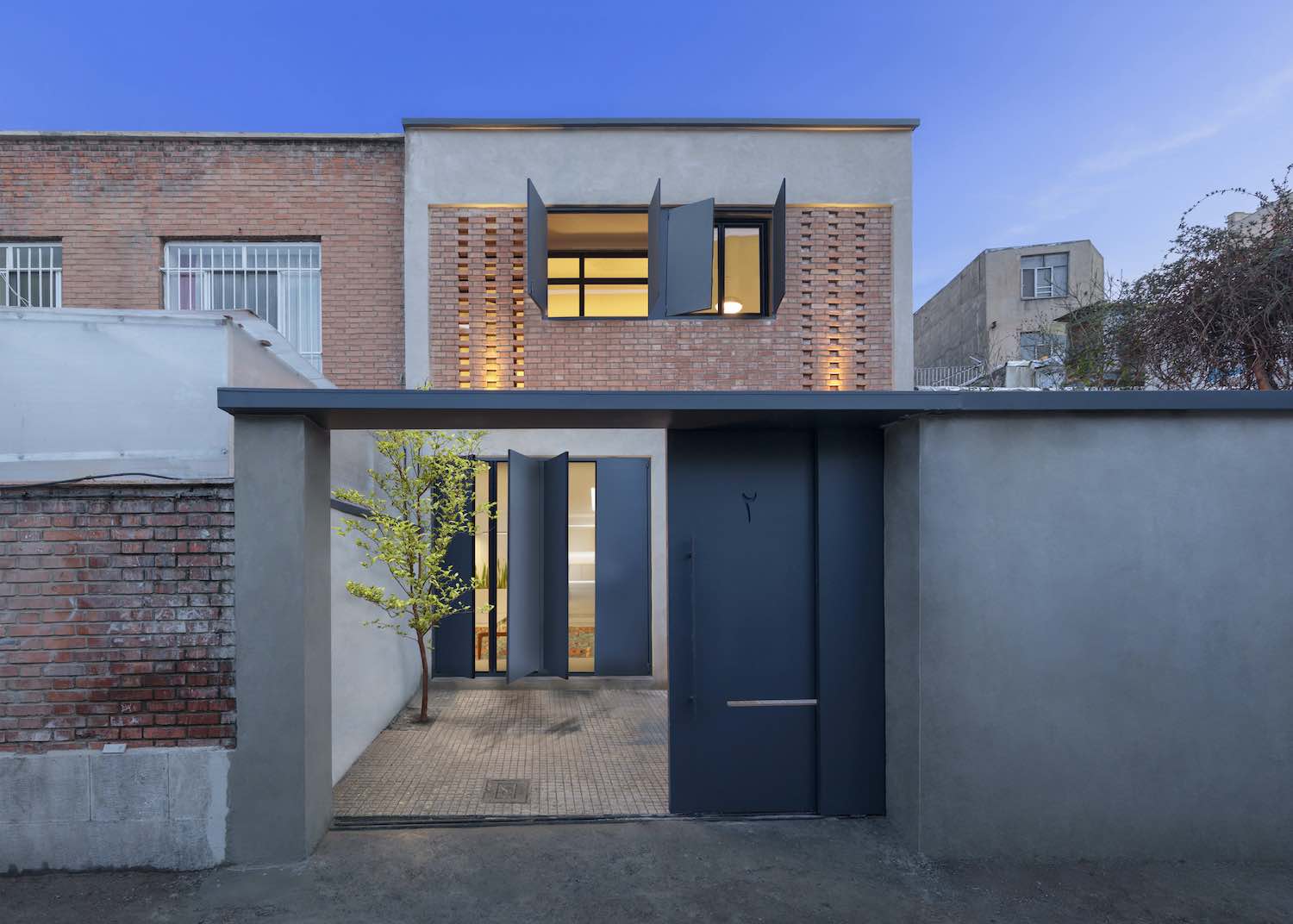 The experience of the "house with spirit" for us, was an experience of redefining the soul of Iranian architecture with an Avangard appearance. Appreciating the soul can take any form, or in other words, it is independent of forms. It is the discovery of what exists, not the creation of something nonexistence. It is a journey from a self to its own, without the need for a single step in any direction. Just being, discovering, and enjoying, here and now.

In the minds of the Iranian majority, development and value are considered to get as far away from traditions and principles as possible. Houses with new and unfamiliar characters are more popular in the housing market. A market born of capitalist thinking, consumerism, and building traders thinking. Every day we see "hitting" values ​​and "building" anonymity. While deviating from the principle always causes pain that invites the human soul to return to its source.

"Anyone who stays away from his origin, Will always search for it " 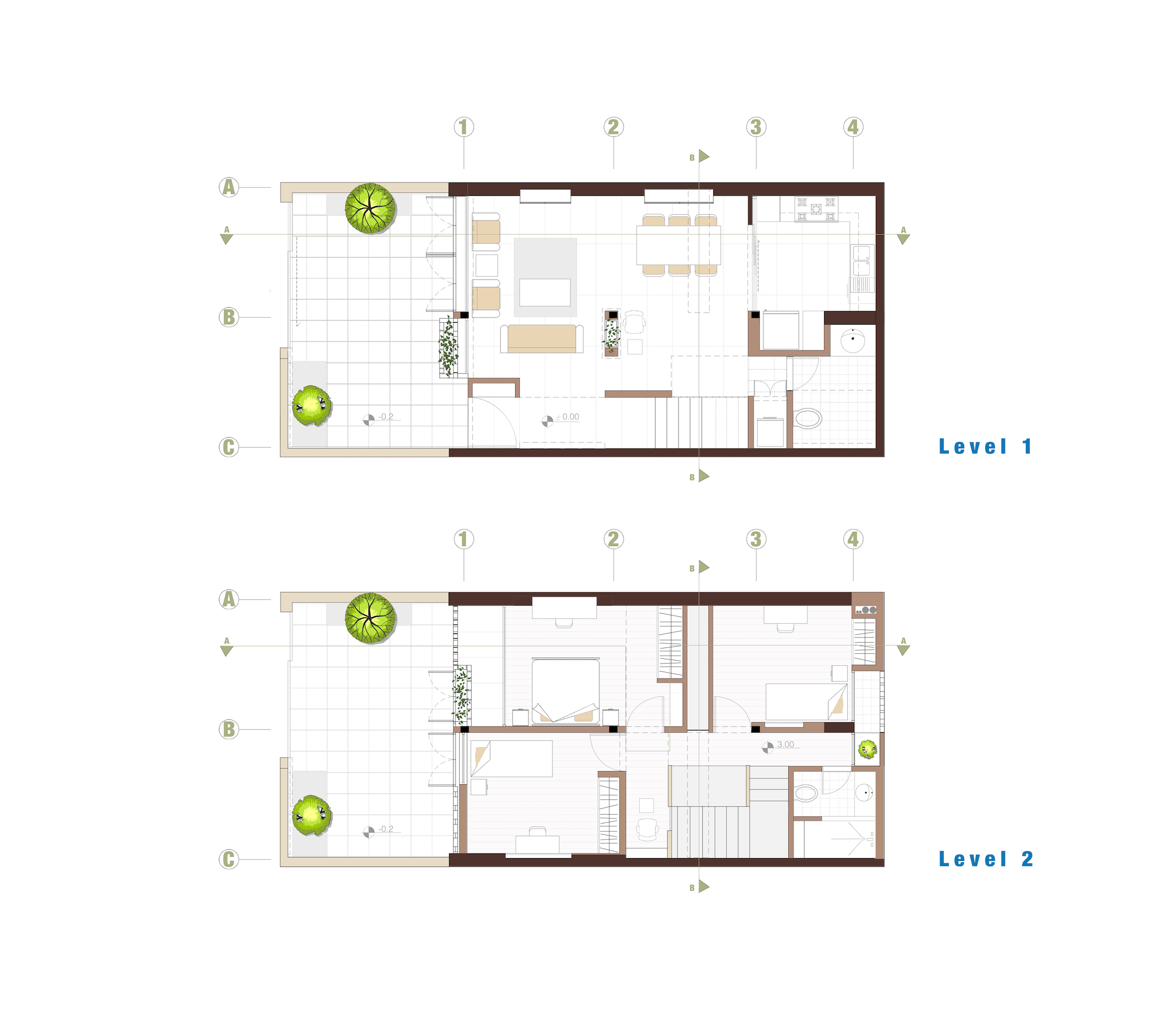 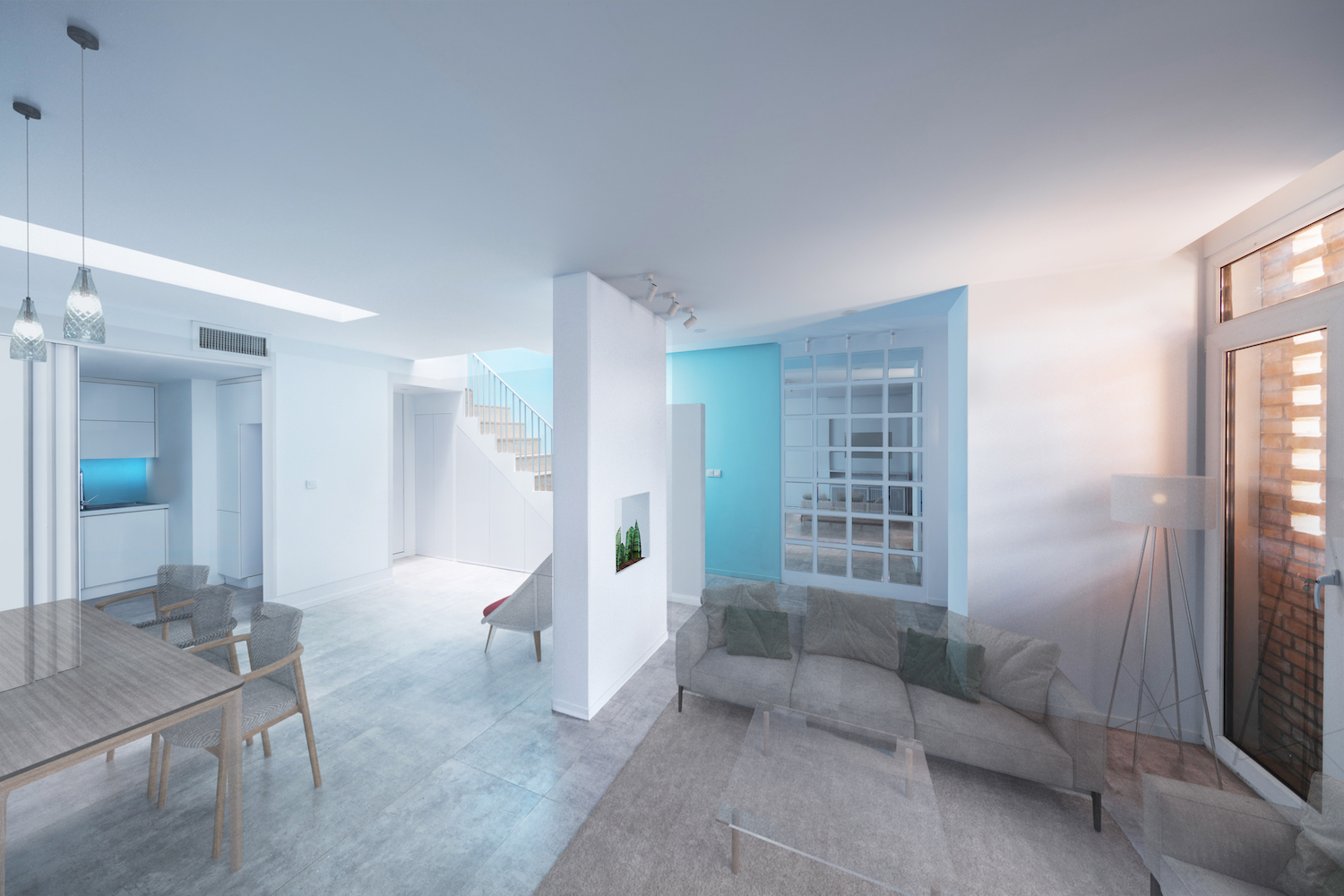 The “house with spirit” was referred to us while a desolate abandoned building with serious installation and structural problems. The intention of the employer was lovely. With a low and limited budget, he had, he preferred to find a home with the atmosphere of his Childhood house so that his children would not grow up in lifeless apartments, let them be a child, feel the being, and just be. From the moment we entered the project site, we could understand the feeling of home. Designing such a space was not difficult, everything was there, we just had to polish it a little to make its spirit shine from the background. 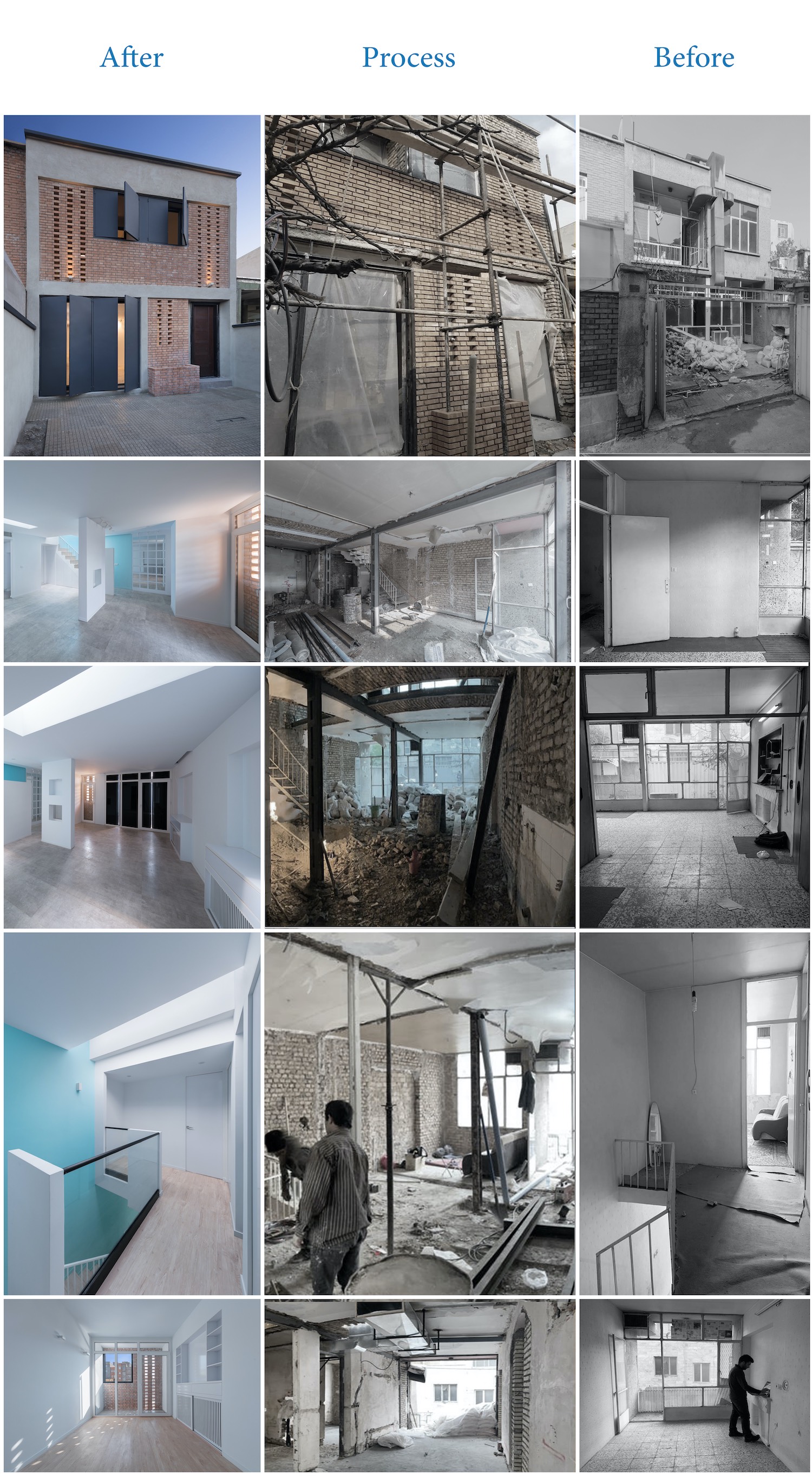 We made rules for our design prosses, Our first design rule was, "Nothing will be added or subtracted." The old brick pattern was used to design the facade with the layout of the house. The old shelves were redefined for new functions. Also, raw steel, cement, woods, tiles, and plasters were our tools for the design that left no room for the designer's personal taste 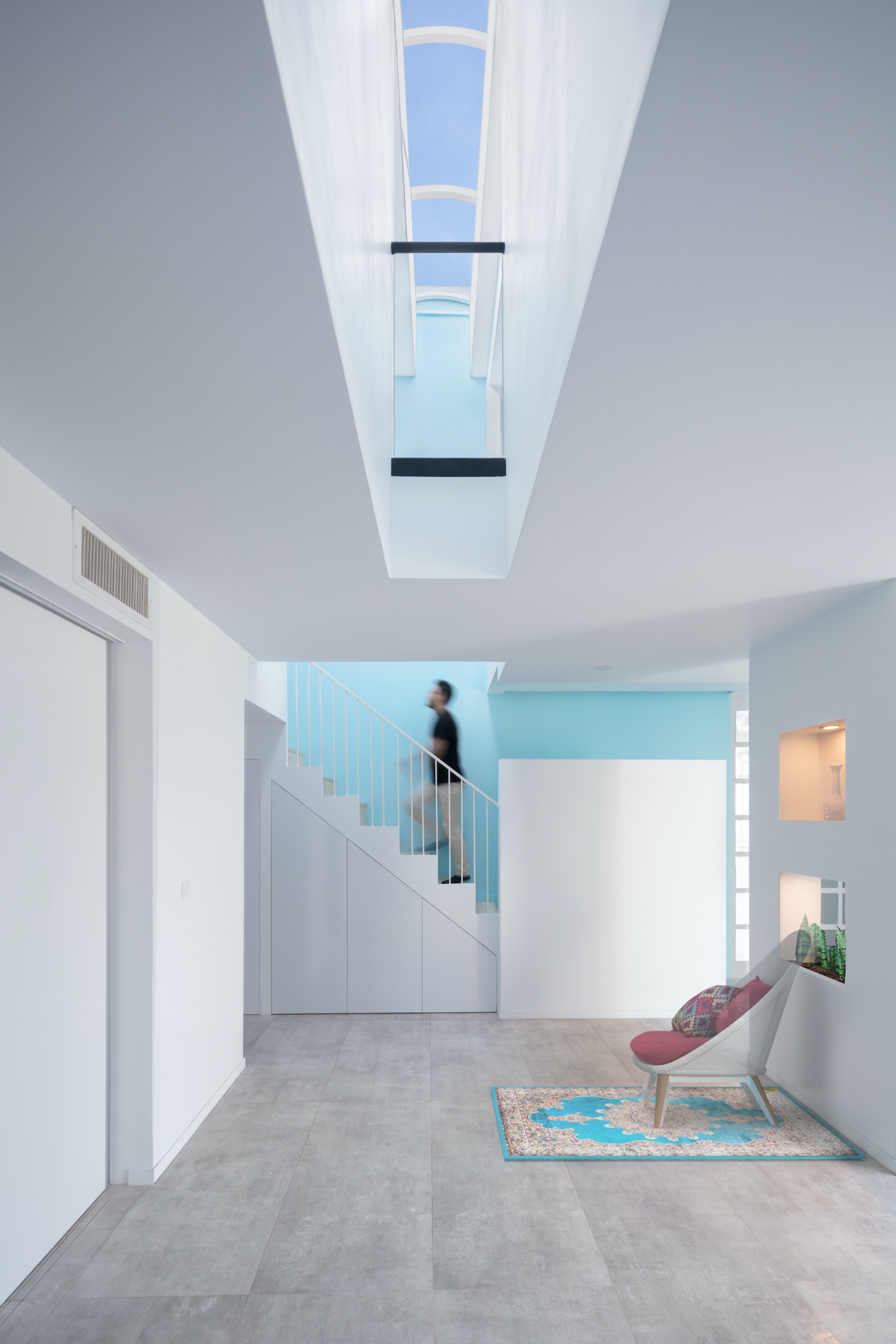 Preserving the simplicity of this house was our other rule, nothing was added for just beauty aspects because nudity would reveal the spirit of the space from the background of mind and matter. 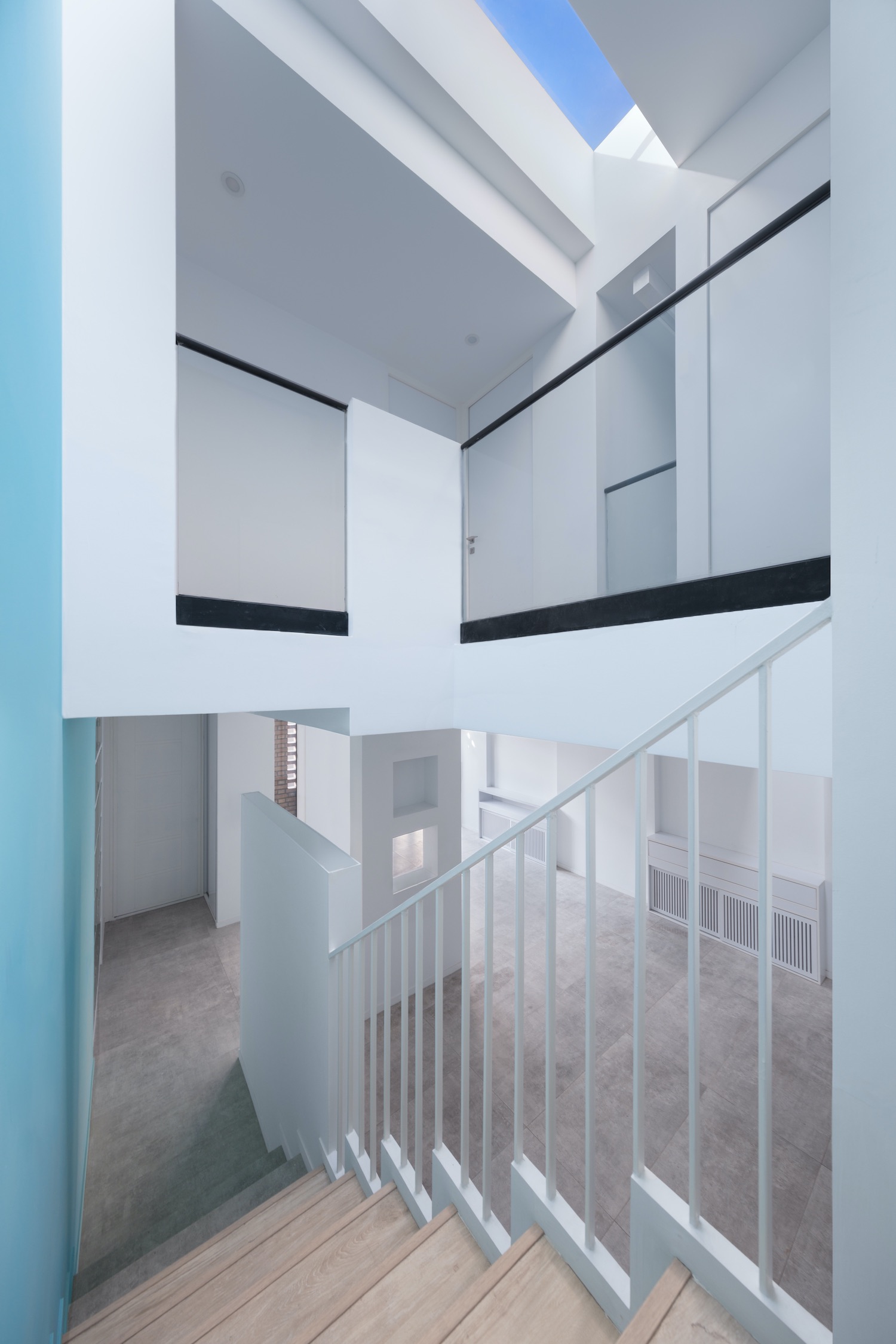 Our final decision was that although this house has a small yard for children to play, we would design a house with spirit. Increase nonessential functions for some spaces so that the user can complete the design himself and creativity and flexibility prevail.

We've added a sense of discovery and playfulness to the design of the sections, and in addition to creating more fluidity in the space and better connection between the two floors also do not provide complete information about events going on the floors to make it the house more interesting and mysterious. Mirrors also add ambiguity to the project. 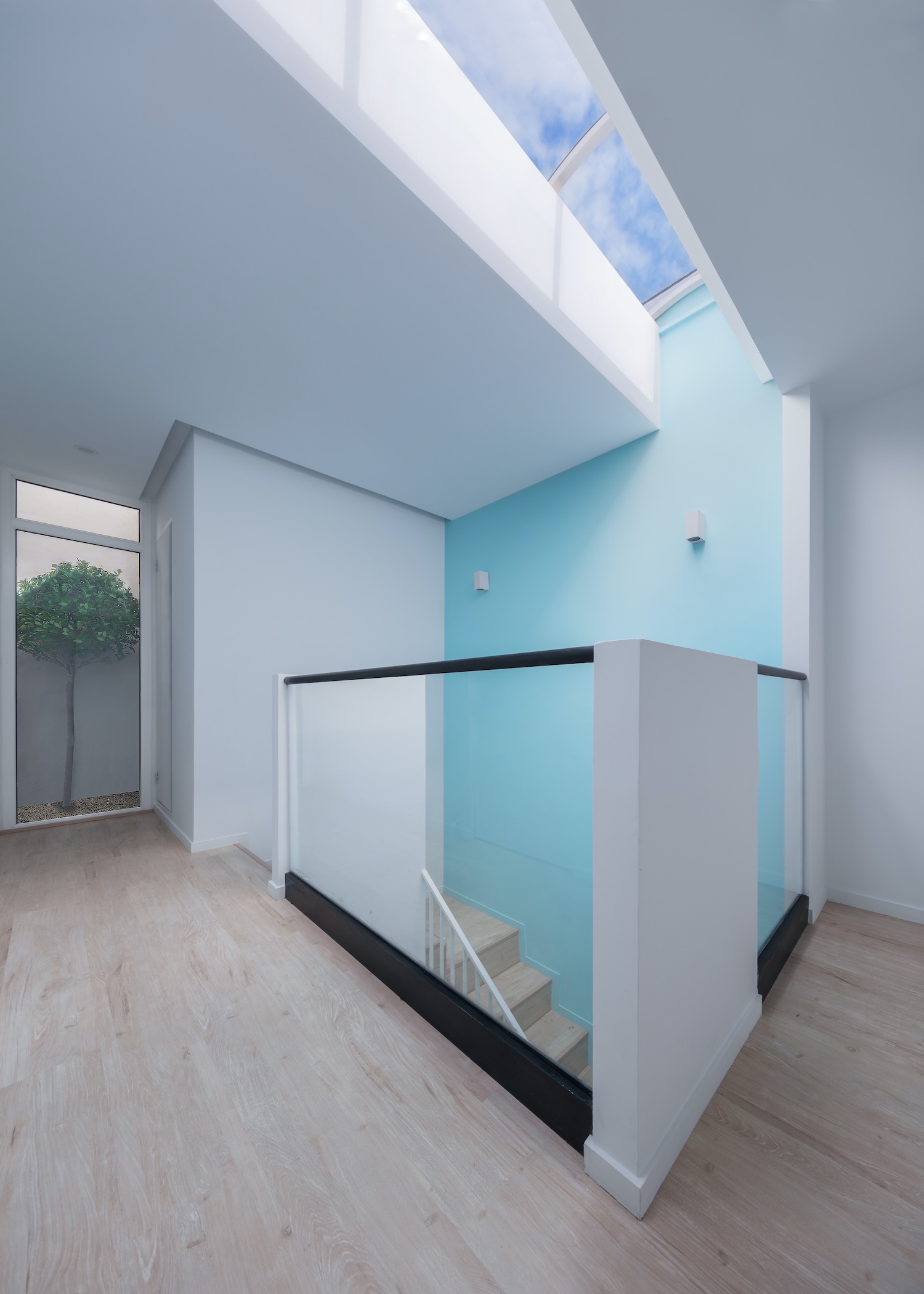 The landlord was concerned about the proximity of neighboring windows and his privacy. Also, due to the insecurity in the area, there was a need for protection to maintain the security of the home and family. After that, the landlord's concern, it was clear that he wanted a safe space away from the hustle and bustle of the city.

The wall, based on the mentality of the employer, has become a filter that minimizes the connection with out-of-home unbalances, and if desired, part of this filter would be opened or closed. The pattern of the bricks was used as a way to enter the light without worrying about the privacy of the neighboring houses. Also, the window protectors became an element for facade design, which made the facade more dynamic and created a nice play and variation for the facade. The roof of the project was the only Surface that could shed light on the heart of the project without worry, and the sky could be part of the roof of our project. 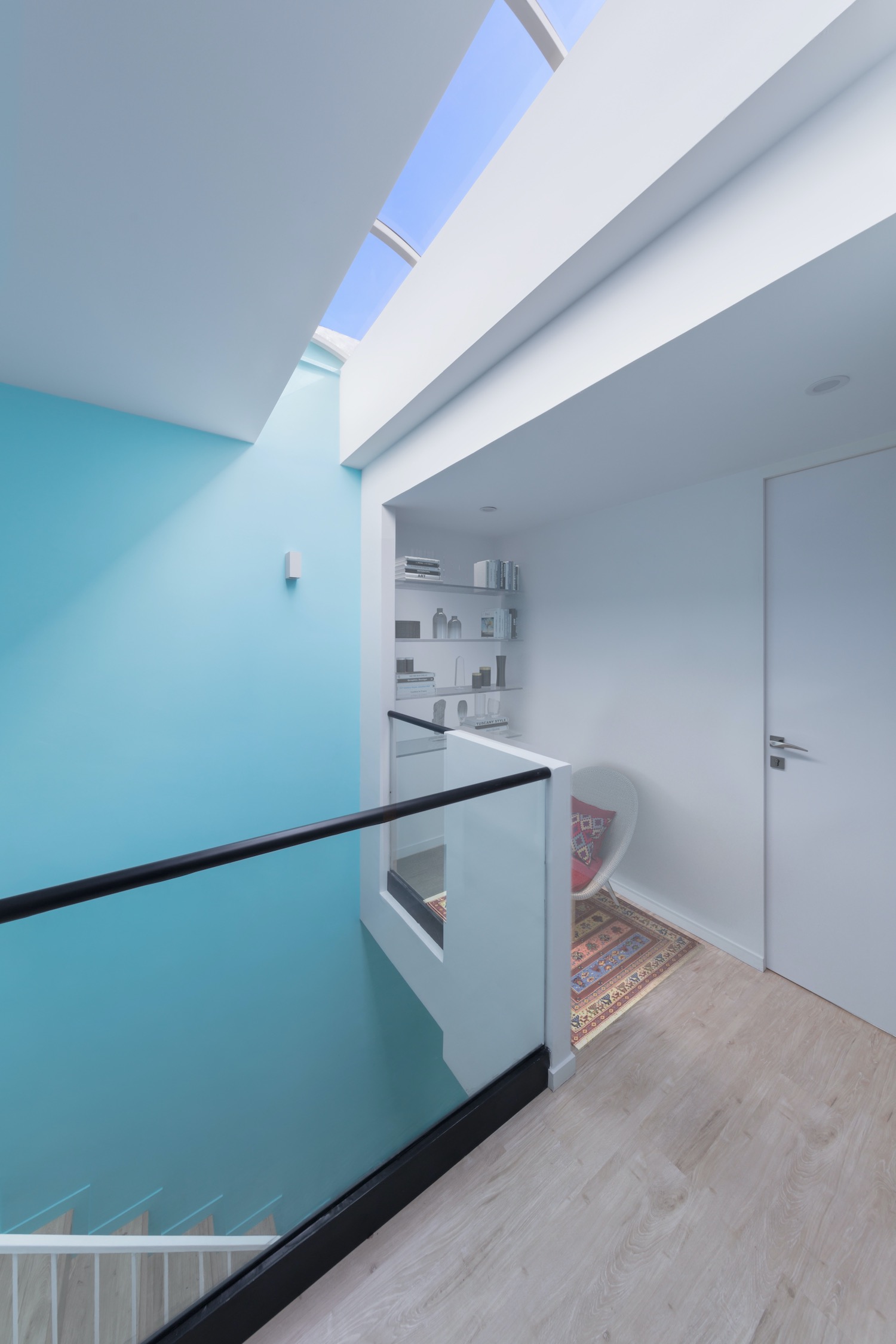 “The house with the spirit” was the only house renovated on that alley. Its facade was designed with great care and sensitivity. The materials and the design grids were taken from the neighboring houses as much as possible so that he could sit modestly and harmoniously with his companions. 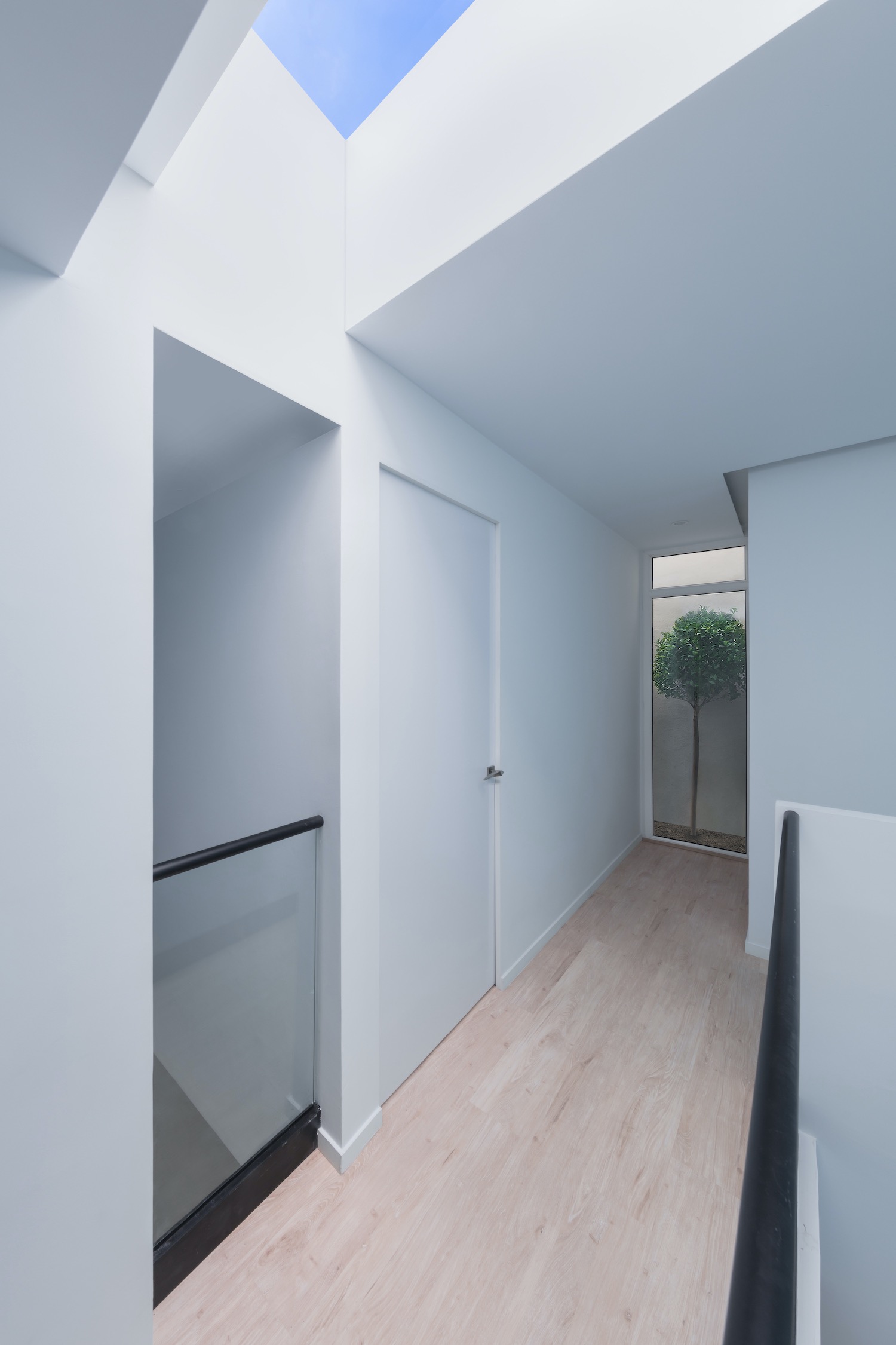 The structure of this project was extremely worrying, and it took the most cost and manpower to turn a traditional, sedentary structure into a combination of a steel structure with a single foot foundation and reinforced load-bearing walls.

In the lighting of the project, hidden lights and light shades were used as much as possible to make the day and night feel appropriate. Turning on and off the lights in the rooms and changing the angle of the sun makes the facade and the project dynamic. Also, small gardens in all interior spaces help to make the space gentler. 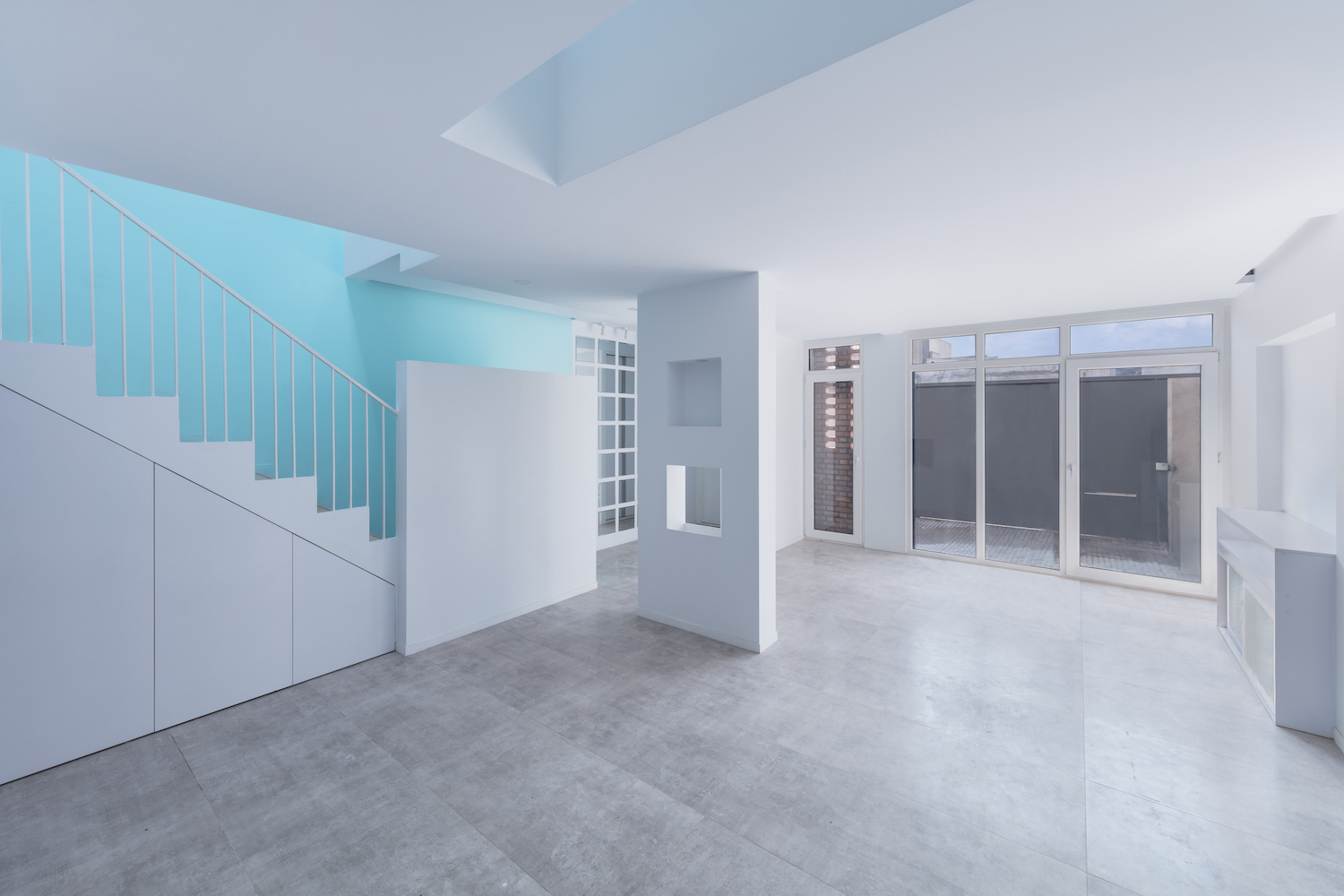 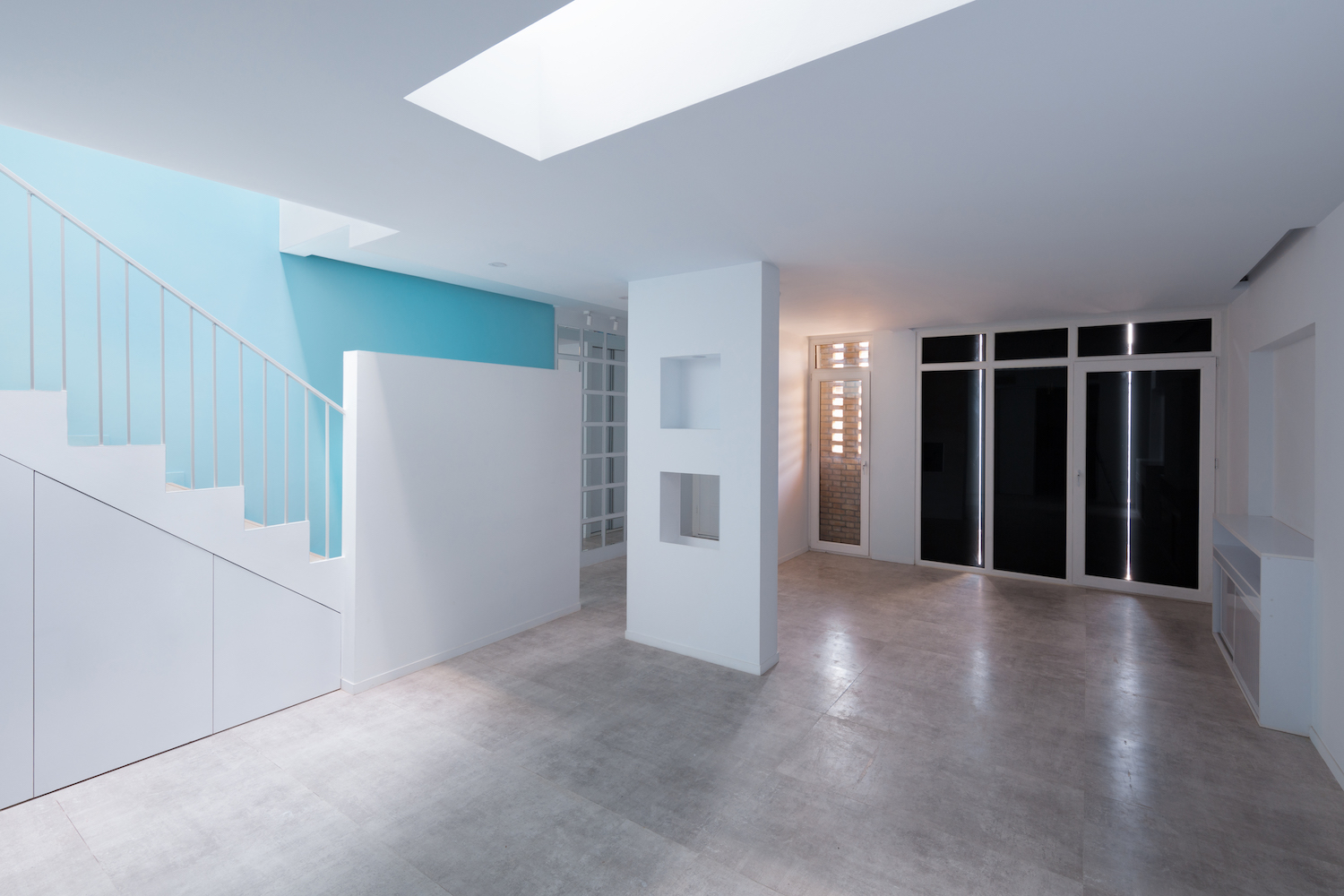 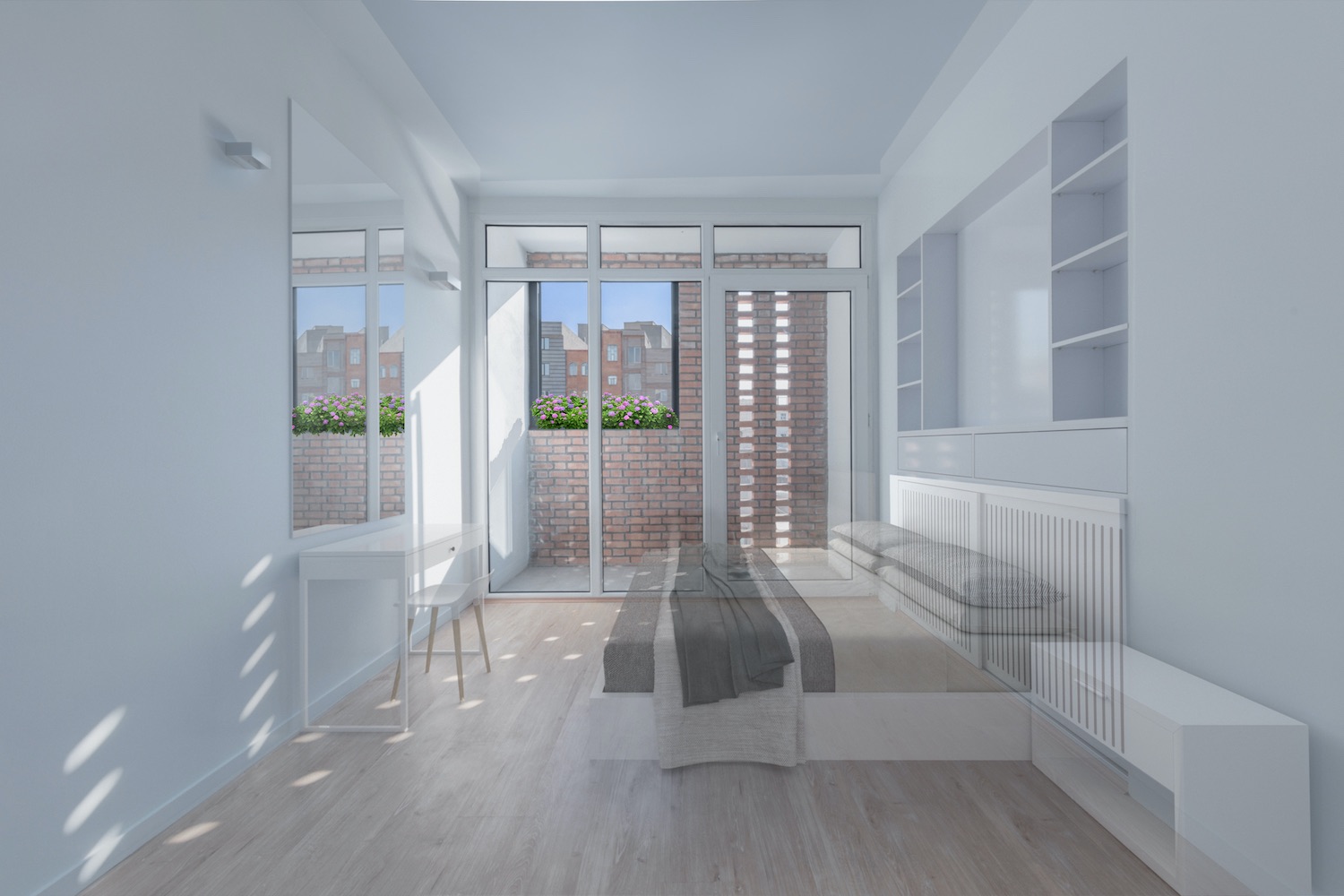 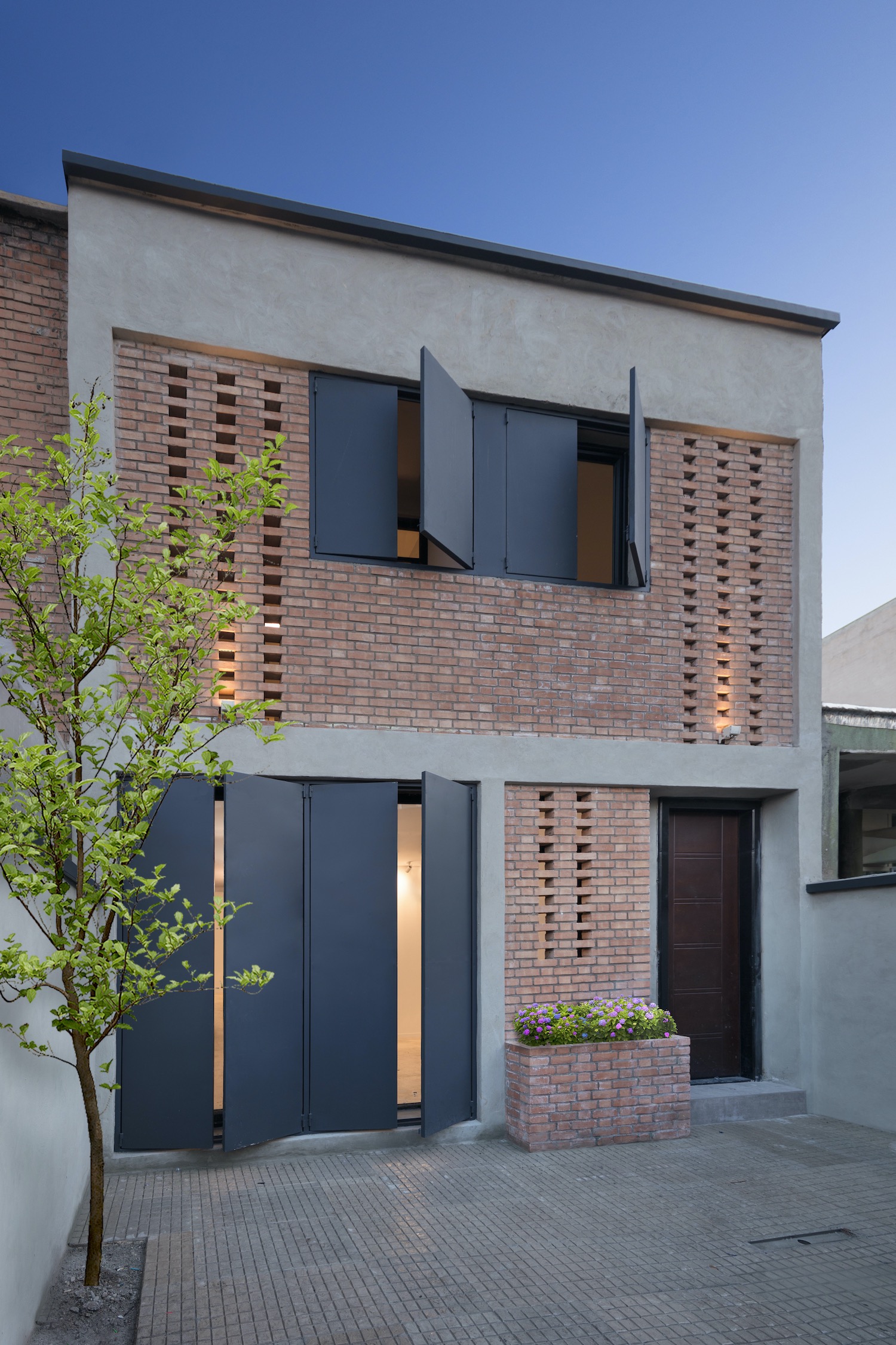 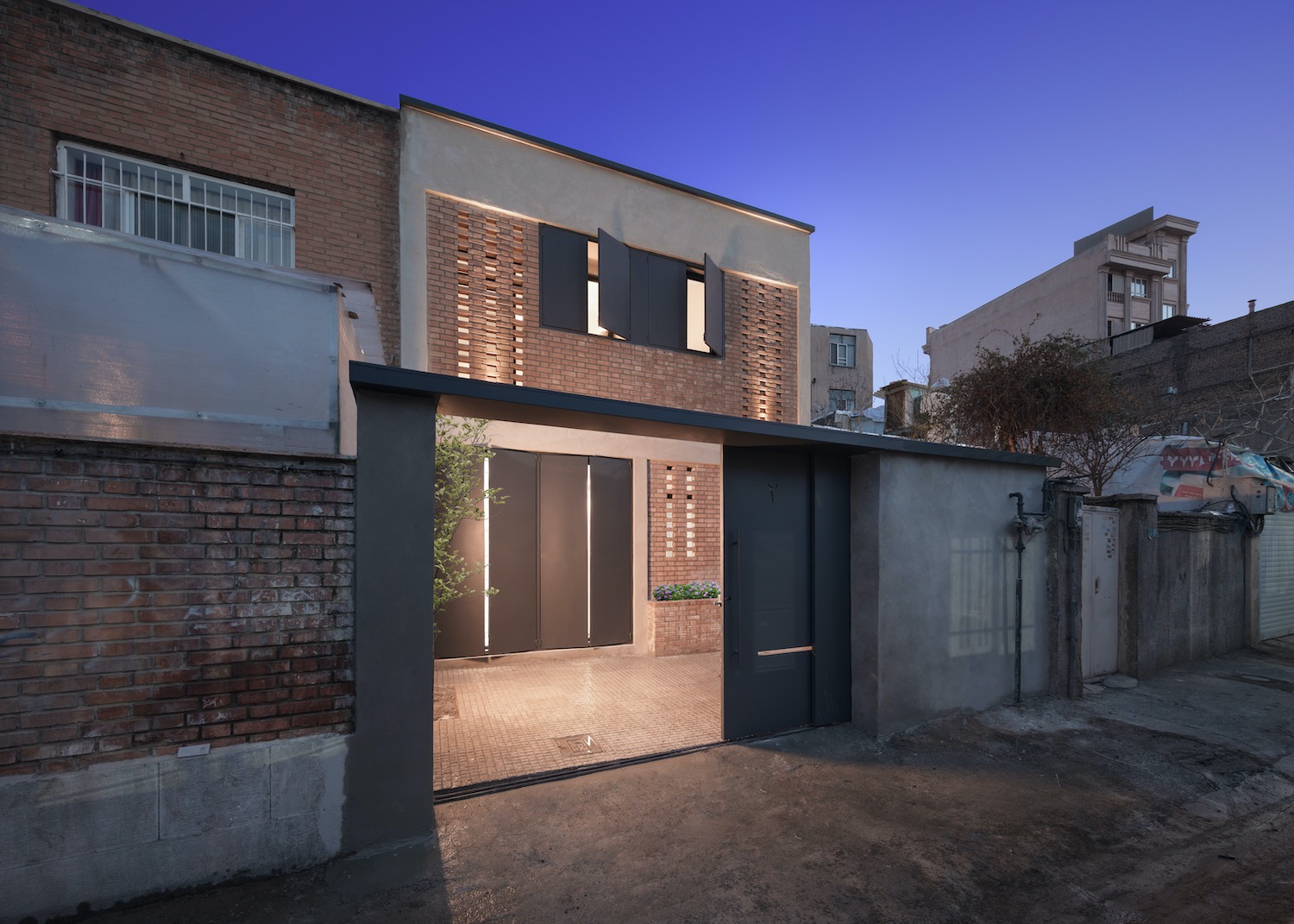 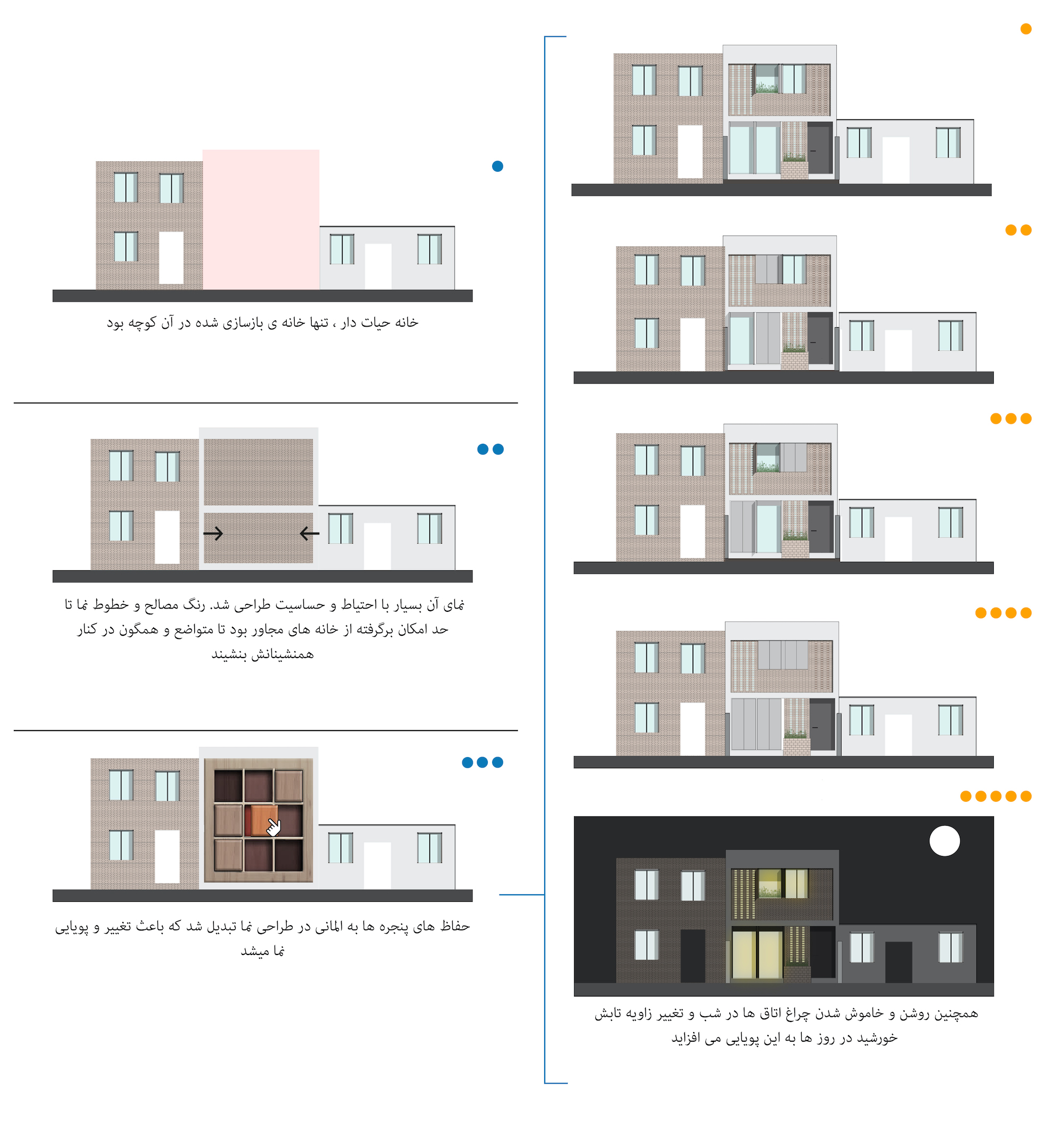 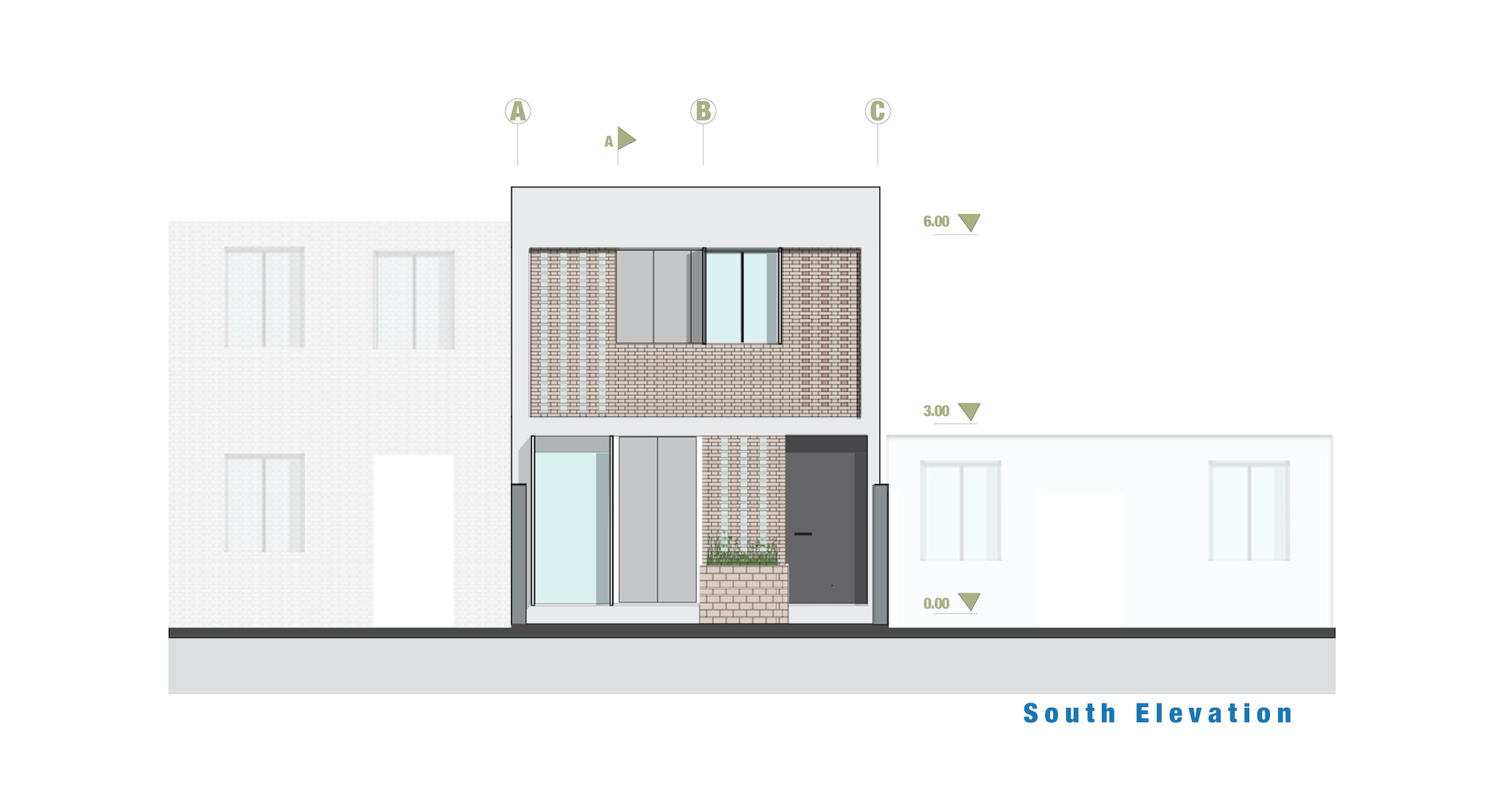 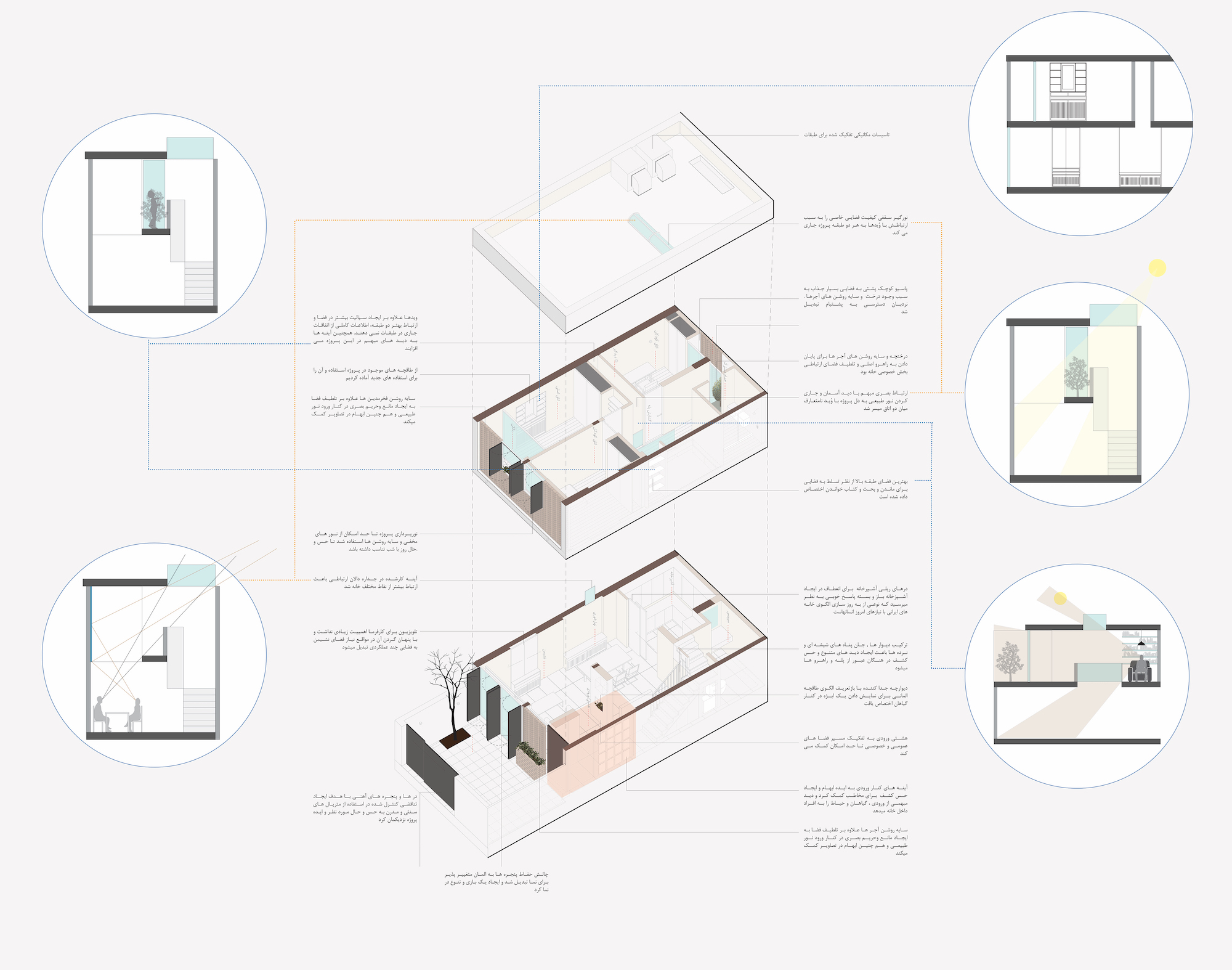 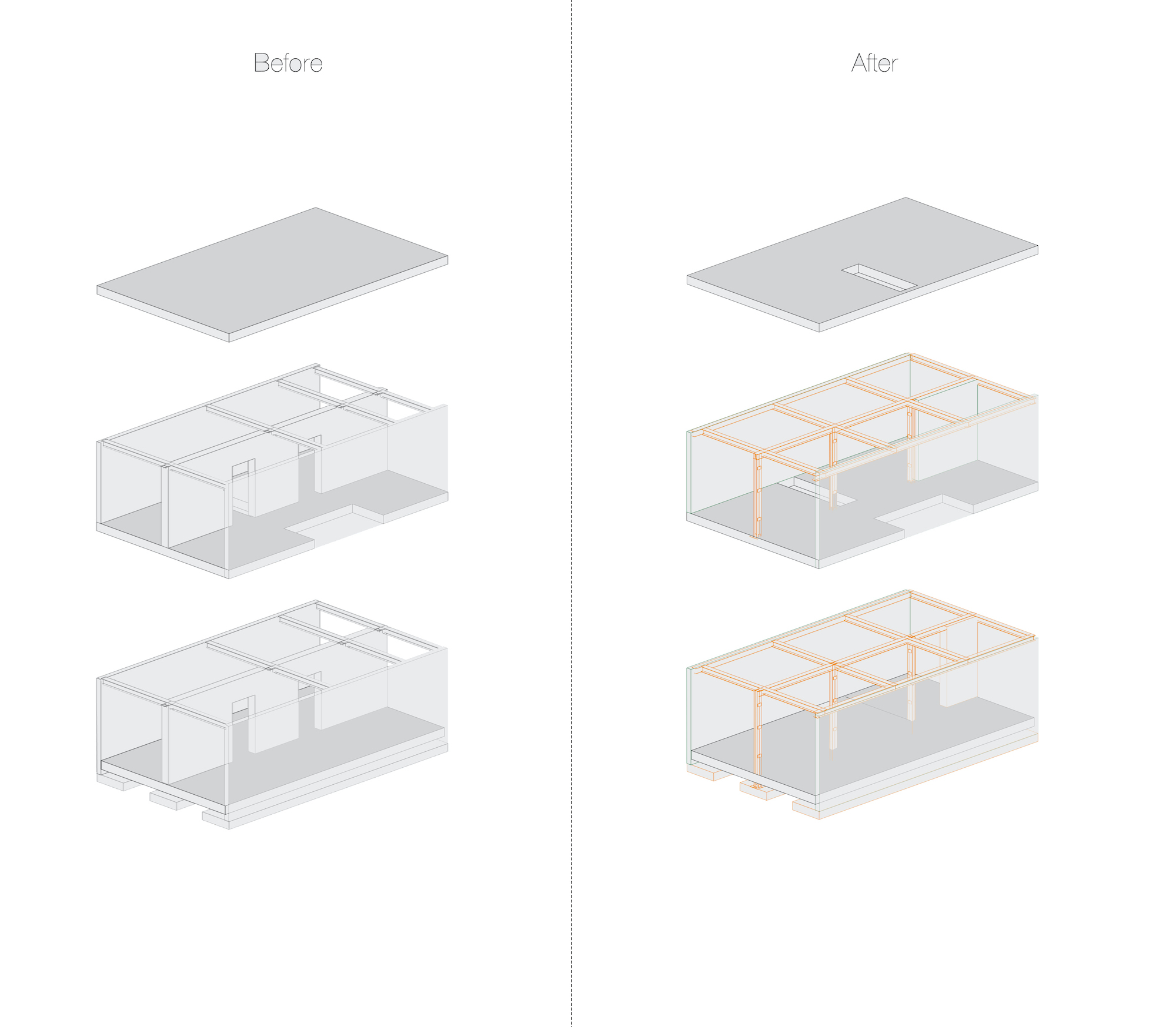 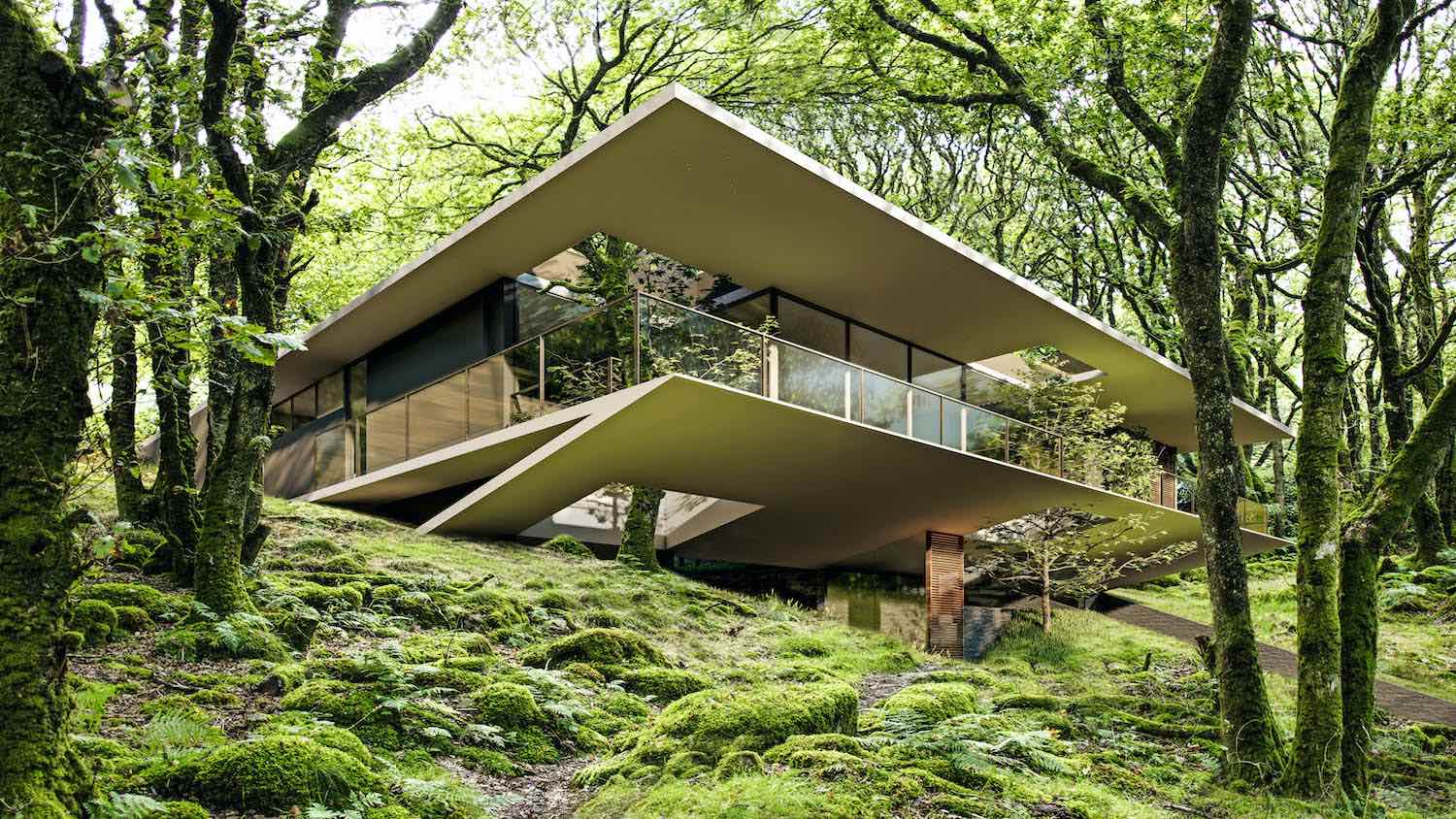 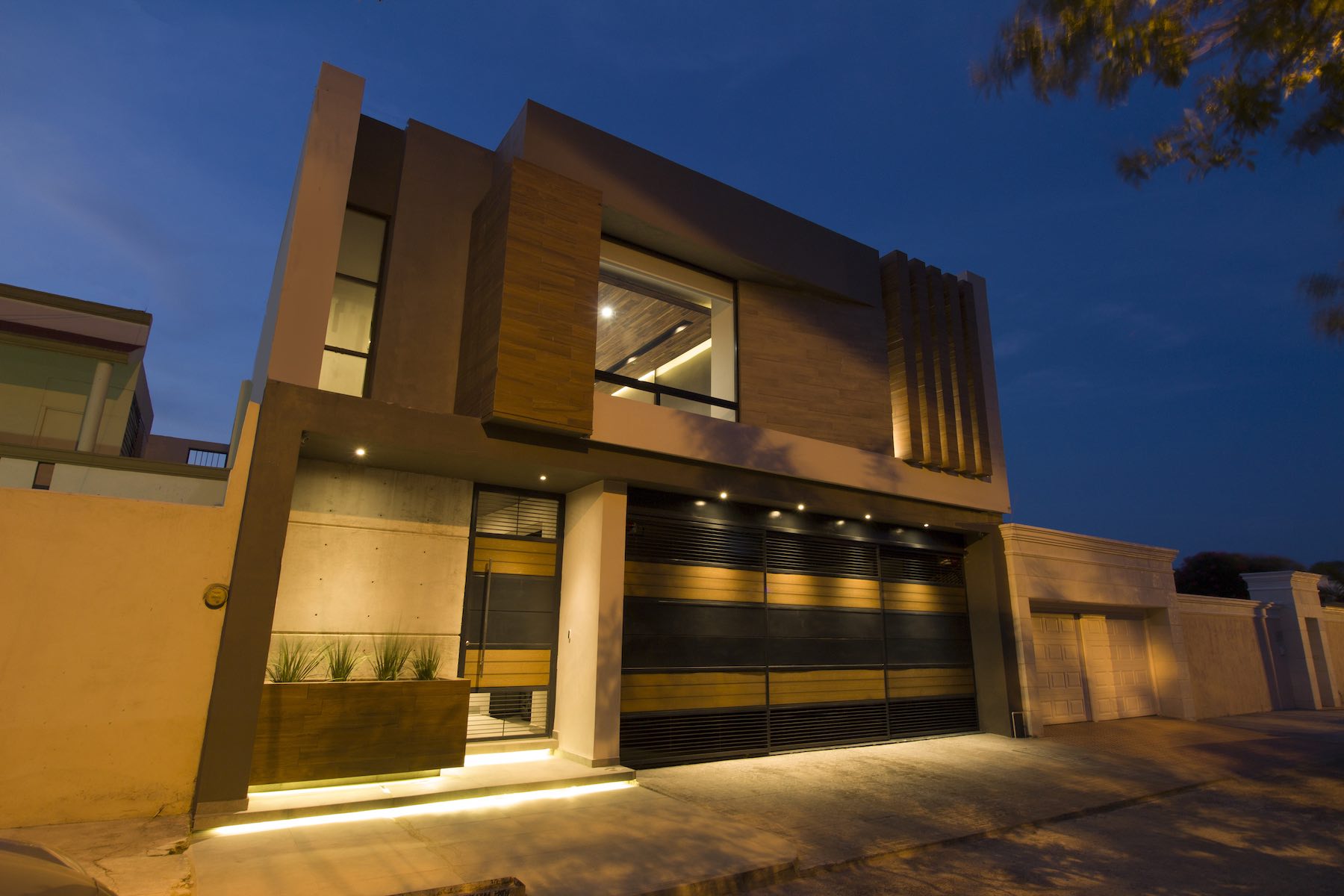 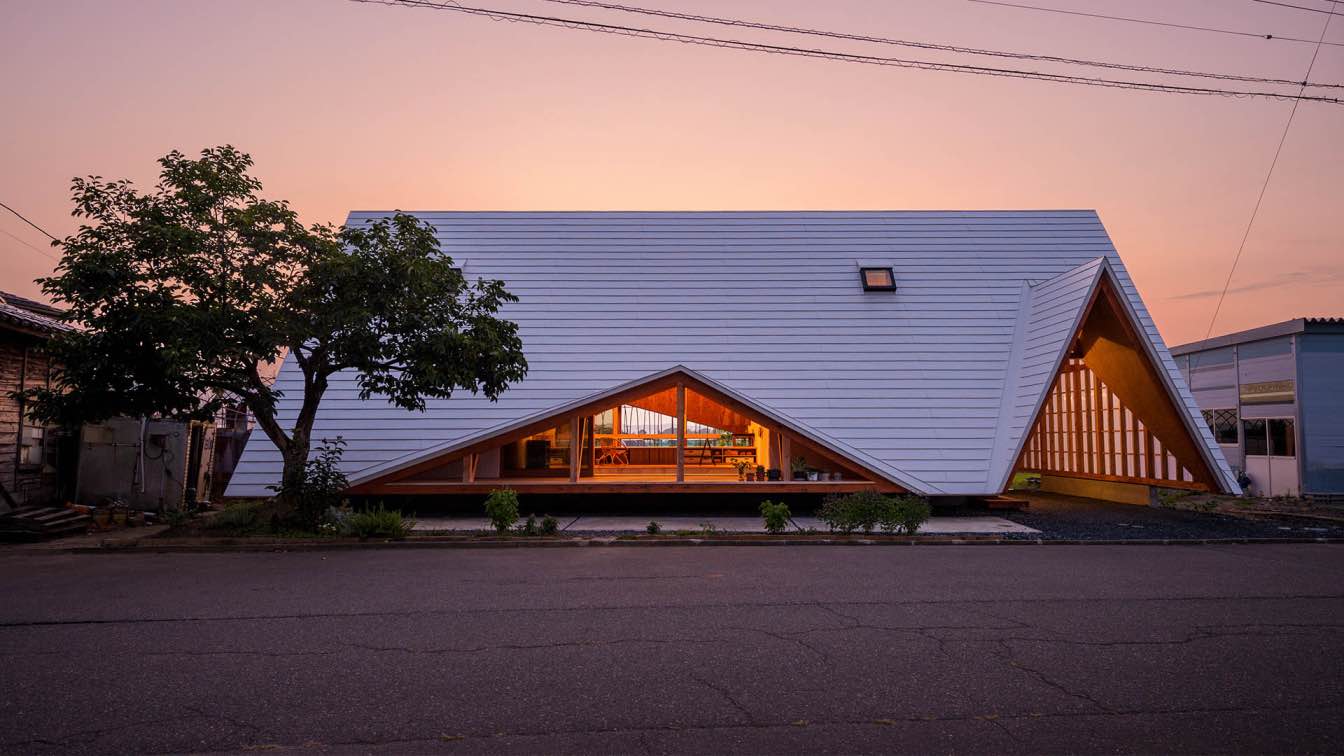